New York drops a ball once a year; Boston used to do it every day 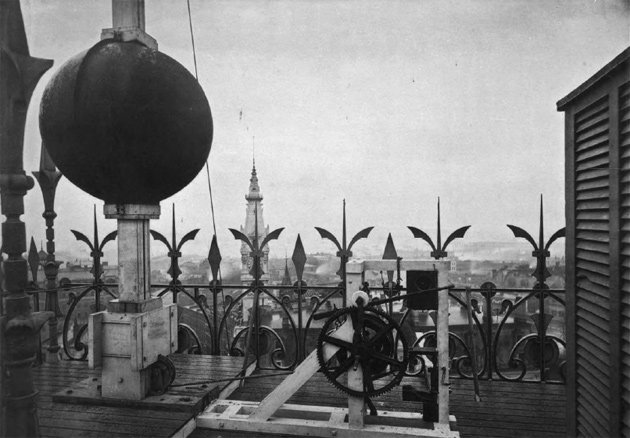 Time ball waiting to be hoisted above Milk and Devonshire in 1881 (Source).

The annual ball drop in Times Square tonight is the vestige of what was once a network of daily time-ball drops in US coastal cities, including Boston, to help mariners calibrate their shipboard clocks - vital to determining their location once they were at sea.

Boston's first time ball, a 1/8-inch thick copper sphere four feet in diameter and weighing 400 pounds, dropped at noon on May 8, 1878, from the top of a 20-foot square mast on the roof of the Equitable Life Assurance building at Devonshire and Milk streets downtown.

Well into the 20th century, and eventually moved to other buildings, the ball, triggered at first from telegraph signals from an observatory at Harvard, and later, in Washington, provided both ship captains and locals a way to synchronize their clocks and watches once a day.

The Equitable Building in the 1870s (via BPL collection); compare to the view today:

In an age when electronic signals were spreading around the world over telegraph and then telephone wires, the system was a state-of-the-art solution to an ancient problem: How to help ship captains navigate the seven seas. Figuring latitude was relatively easy - it could be done by noting the position of the sun or stars. But there was nothing similar for longitude - and you need both longitude and latitude to know where you are.

In the 1700s, an English carpenter turned clock maker named John Harrison solved the longitude problem by building very reliable clocks, set to the time in Greenwich. By comparing the time at which the sun hit its highest point in the sky - noon - with the time back in Greenwich, a mariner could use the time difference to figure out how far from Greenwich he was and so what his longitude was. Couple that with latitude and he'd know just where he was.

The problem was that the clocks of the day didn't always keep the best of time, so captains needed a way to figure out how off their clocks were running and make adjustments at the ports they'd visit.

In the 1829, Portsmouth, England installed a time ball, by which mariners could set their clocks. In the 1840s, the US Navy began experimenting with one (which was mostly a failure since the Navy offices were far up the Potomac, beyond where most ocean-going ships would dock). In Boston, people started talking about building a tower from which to drop a ball atop the State House; that plan foundered in part because it mostly wouldn't be visible from the harbor; in the meantime, local companies offered the service of synchronizing on-board clocks with their own timekeepers.

But in the 1870s, the US Naval Observatory began looking at the idea again with gusto. In Boston, the Harvard Observatory teamed up with the Equitable company, the US Army's Signal Corps and Stearns & George, a company that specialized in installing telegraph-connected burglar alarms (and which, in 1877, may have published the world's first phone book) to build and install Boston's first time ball - at a cost of $608.50, according to a detailed description of the set up and its operation written by Army Signal Corps Sgt. B.M. Purssell in 1881, as part of an overall Signal Corps Circular of Information with Regard to Time-Balls.

A telegraph line ran from the observatory across the river to the Equitable building, where it ran through the Stearns & George office and then to a Signal Corps office, where it connected to a battery-powered mechanism connected to iron ratchets at the top of the mast, constructed out of "clear white pine."

At 11:55 a.m., using a "fine chronometer" in the Signal Corps office to gauge the local time, somebody would winch the ball halfway up to the top of the mast. At 11:58, he would winch it to the top, where it would then be held by a ratchet mechanism magnetized by a battery, which would hold the ball in place. At exactly noon, the signal from the observatory would stop, creating an electrical break that would demagnetize the ratchet mechanism, releasing the ball, which would then fall, signalling noon - it would stop on a rubberized buffer at the bottom of the mast.

The mechanism in the Signal Corps office, from Purssell's report:

The first two failures were due to "residual magnetism" - the ratchet remained magnetized after the signal dropped and didn't release the ball. Over the next three years, other things that went wrong included the circuit from Harvard failing, the Harvard observatory sending the drop signal a bit too early, stormy weather and ice freezing the ball in place. On Aug. 27, 1878, the ball dropped four seconds too early; on Feb. 15, 1879, it fell 15 seconds too early.

In January, 1879, Sgt. Purssell and his underlings took over releasing the ball for its drop by hand on Sundays.

Even on days when the system used the telegraph signal to work, considerable human attention was required, both to turning the crank to lift the ball and to being ready to spring into action should a problem arise.

During the operation of dropping, the thoughts of the operator must be intensely concentrated upon his work. The slightest wandering of the mind from the business in hand will lead to failure.

And, well, Pvt. Byrann, you know what you did - on Oct. 1, 1878, while you were operating the system manually, you released the ball 30 seconds too early.

Ice froze on north and east sides of staff so that the ball could not be moved. Had the ice been discovered in time it might have been removed.

In truth, however, the ball was ultimately kind of a failure, except perhaps as a demonstration of electrical signaling in the day, Alexis McCrossen writes in an overview of American time-balling. In particular, he writes, few captains, let alone locals, actually used the ball drop to adjust their clocks and watches.

For instance, the officer in charge of Boston's Hydrographic Office found in 1886 that a prominent member of the Chamber of Commerce had never heard of the time ball, and those city officials who were "in the know" did not make use of it, since "bells are struck all over the city at noon by the Cambridge Observatory." He further reported that "prominent shipping people" assured him "that the ball is seldom if ever made use of by the captains of vessels for rating chronometers." Captains of ships themselves confirmed this report, stating "that they seldom see the ball, and never think of rating their chronometers by it."

Still, the Signal Corps, and, eventually, the Hydrographic Office, didn't give up. In 1884, the ball was moved to the top of the Post Office Building in Post Office Square. The ball was terminated for awhile, but in 1902, the Hydrographic Office erected a new time-ball set up at the top of the Ames Building, which still stands across from the Old State House, and where the signals to release the ball were changed from good old Harvard to a naval observatory in Washington, routed via the hydrographic office in the basement of the Custom House.

Every so often, the Globe would announce a problem with the time ball. On March 31, 1909, for example, the paper reported that the Hydrographic Office wouldn't even try to hoist the ball when the winds exceeded 20 m.p.h. for fear the heavy ball would put too much of a strain on the mast in the wind and snap it.

The office figured out the problem and was able to get the ball up in even a gale. But on Jan. 20, 1917, in the midst of a furious snowstorm, the Globe reports, "hundreds of pedestrians gazed skyward and wondered at the supreme nerve of man" as an Ames Building employee "clambered up the time ball pole on the roof of the tall structure" to untangle the ropes that were supposed to raise the ball but instead got knotted up in the wind.

And on Jan. 8, 1919, the paper reported, the ball stopped working, but it took some time for the assigned mechanic to get up to the roof and figure out why, because he was ill with the flu.

And then the ball seems to have just faded away. McCrossen writes that during World War I, the government decided it had more important things to spend time and money on than time balls that weren't much being used for the original purpose and began decommissioning its setups across the US. By 1922, almost all were gone, he writes.

Thank you - and typo

Thanks for this very interesting article, Adam.

However, there's an important typo near the beginning. You wrote "Figuring longitude was relatively easy - it could be done by noting the position of the sun or stars." I'm pretty sure you mean latitude - otherwise the rest doesn't make sense.

Also, you mistyped the close of the last blockquote, leading to one very long blockquote of the rest of the story.

Happy New Year and thank you for another year of news, animals, and longer explorations of interest!

You wrote that as I was editing my post to include the blockquote problem and many thanks.

"could" appears twice in a row.

I think there's still another typo?

Figuring latitude was relatively easy - it could be done by noting the position of the sun or stars. But there was nothing similar for latitude - and you need both longitude and latitude to know where you are.

Is it longitude or latitude that's hard here? ;)

There was an entire documentary on it.

Apparently more than one, since Swirly notes a different one.

How did I not know this? Cool info!

Can't find the NOVA special on this

It comes with teaching guides and all the trimmings.

However, there is this BBC documentary on John Harrison's work toward the Longitude Prize, which was offered for the person who could beat the longitude measurement problem. He was a clockmaker, not a scientist, which made serious waves when he managed to solve the problem of a clock that would not lose any time during a transatlantic voyage.

Dava Sobel's book "Longitude" is excellent. As you point out, Harrison was a guy who worked with his hands for a living; the idea that he would win the prize for devising a means for calculating longitude infuriated the aristocratic establishment.

the drop signal a too early,

Wow! Fantastic photo and so

Wow! Fantastic photo and so interesting -- I never knew!

I never knew what was behind

I never knew what was behind the ball in Times Square.Thanks Adam!

Wake me up when ya balls drop

Wake me up when ya balls drop.

I've been dragging people by the Class of 1959 Chapel for years at Harvard Business School never realizing there was an historic perspective to this clock design. Just yesterday in fact for my adult daughter. So what a timely article for us.
https://www.hbs.edu/about/campus-and-culture/campus-built-on-philanthrop...

I have an app on my phone that drops an animated ball to mark noon.

Until Tricky Dick got his revenge in 1973

lots of sailors dropped their balls in Boston.

I’ve always wondered about the significance of the New Years ball drop. Now I know. Thanks Adam

Hotel not to blame for one man robbed by a multi-tasking prostitute and for another tased by a would-be Tinder hookup, board rules
Downtown hotel says it's taking steps to squelch crime there
Horde stomps man in robbery after he exits State Street T stop; two arrested
The Green Line suffers quite the gaffe: Train has a broken pantograph
Pandemic deja vu: Boston Pride canceled again
Man already facing gun charges in Hyde Park arrested in connection with teen's murder in a downtown hotel room