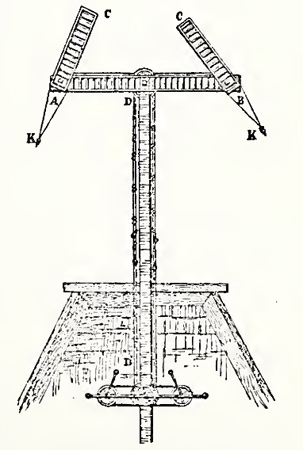 Workers used cranks at the bottom to adjust semaphores in Grout's system. From Swan.

South Boston's Telegraph Hill is where Washington ordered the placement of the cannons that drove the British out of Boston in 1776. You can't miss it - there's a monument there at the top of the hill. And yet the hill and the surrounding neighborhood is named for a failed business that barely survived for six years before its owner gave up and moved to Philadelphia. Read more. 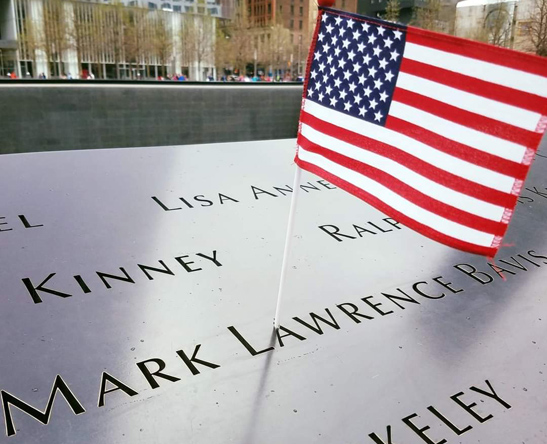 2,996 people were murdered 20 years ago today. More than 200 were from or had ties to Massachusetts, including Mark Bavis, a Los Angeles Kings scout who grew up in Roslindale and who was returning to Los Angeles on United flight 175, and Gerard Dewan, a West Roxbury native who worked as a Green Line trolley driver before moving to New York to become a firefighter. Read more.

On Sept. 6, 1886, Boston held its first Labor Day parade: Several thousand cigar makers, carpenters, painters, roofers, sheet-metal workers, mechanics, hat makers, newspaper pressmen and other workers started marching at 9:30 a.m. through Park Square and other parts of Boston Proper, ending up on Atlantic Avenue, where they boarded steamers for the ride to Downer Landing in Hingham - sort of the Salem Willows of its day - for a daylong picnic. Read more.

Mike Mulligan and his steam shovel are probably behind that tree 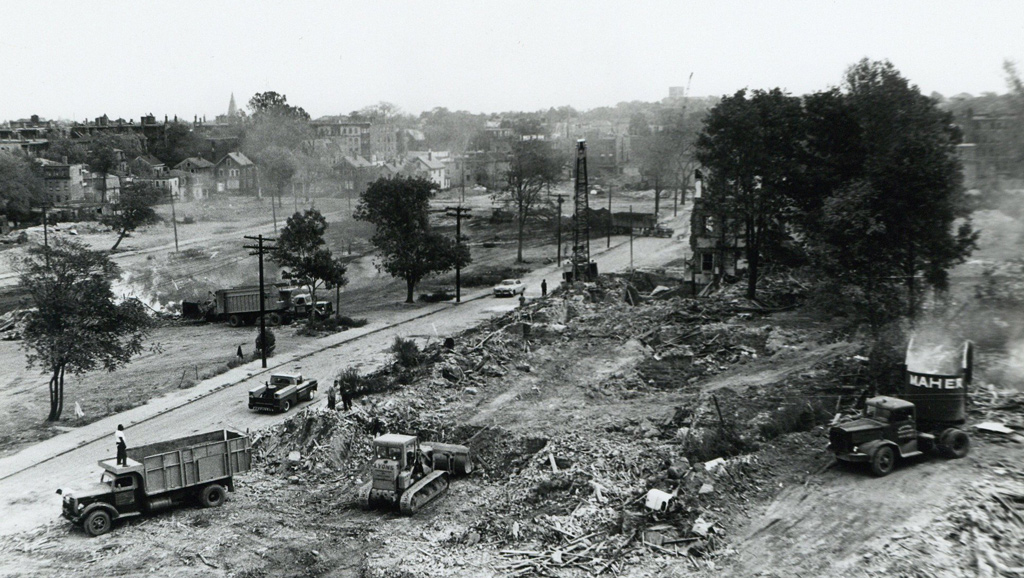 From the transcript of a City Hall hearing on River Street construction.

No, not John Kerry over his failure to shovel his sidewalk after one of the 2015 blizzards - Kerry admitted his wrongdoing, paid his fine and never had to address city leaders.

In 1879, John Conness, who had been one of California's senators during the Civil War, and then retired to the life of a gentleman farmer in, of all places, Mattapan, agreed to appear before a City Hall committee investigating alleged improprieties by the city's superintendent of streets, some of which involved the upgrading of River Street along Conness's farm. Read more. 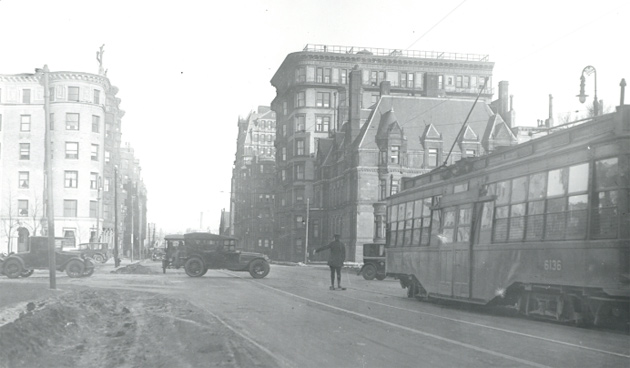 The folks at the Boston City Archives wonder if you can place this scene.

Brookline pond was once 'the dreaded hole and terror of youngsters'

New England Folklore reviews the history of Brookline's Hall's Pond, next to Amory Playground, a block off Beacon Street near Audubon Circle, which kids once thought was bottomless - and which, they say, swallowed up a man, his buggy and his horse one night.

The end of the line - for now 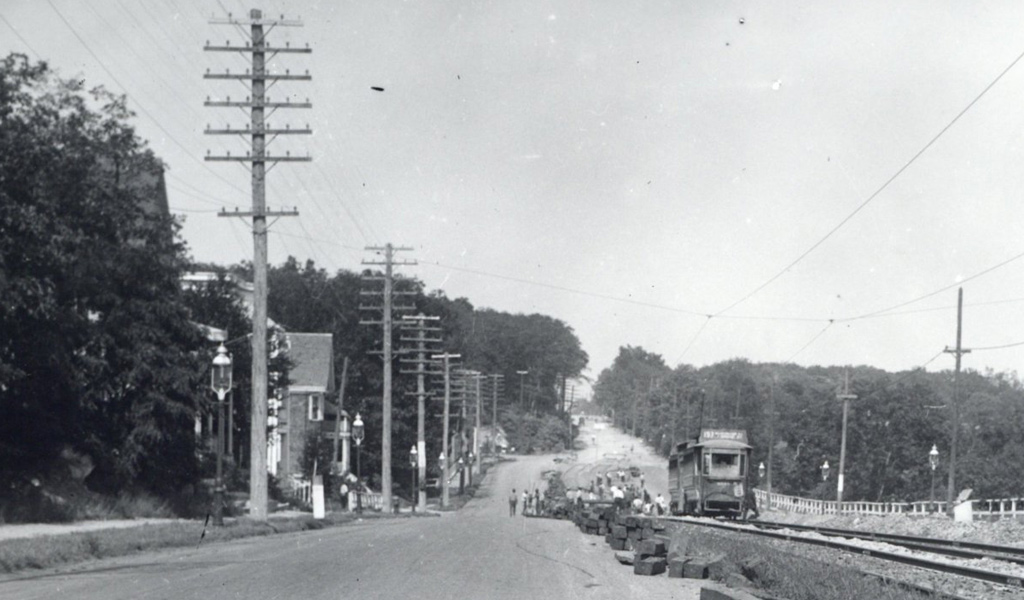 The folks at the Boston City Archives wonder if you can place this scene of workers extending a trolley line in old Boston. See it larger.

Decades-old Roslindale mystery solved: What happened to Vinny Criss and his teeth?

Vinny Criss Has No Teeth

For decades now, one of the ways you could tell an old Rozzie rat - or even somebody who used to take the Orange Line el back in the '70s and '80s - was if they smiled when you said "Vinny Criss has no teeth." Read more.

Back in the day, you could journey here for misfit and uncalled for clothing 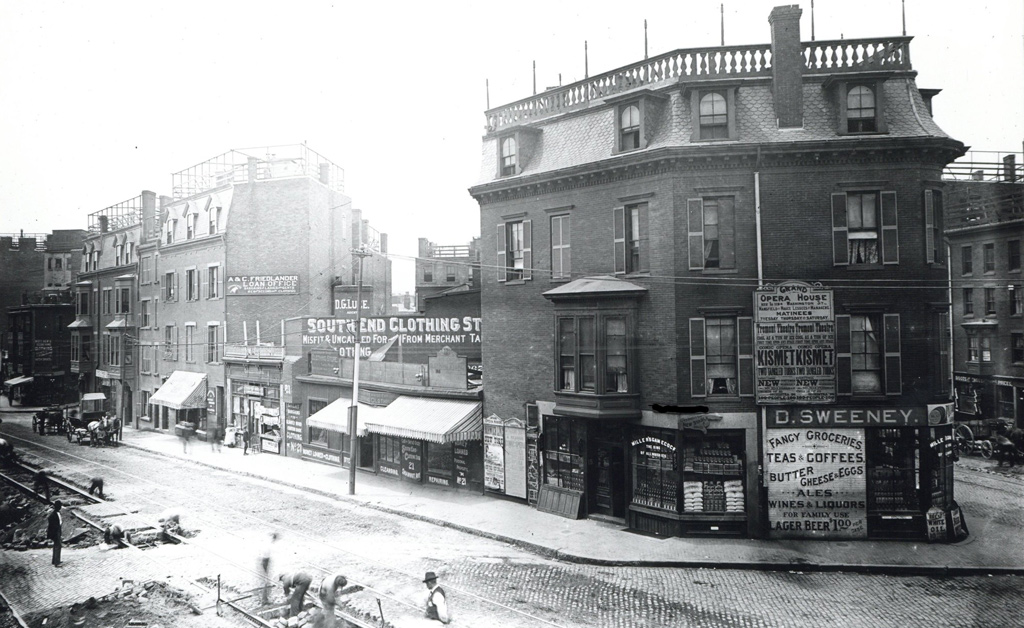 Aline Kaplan takes us on a tour of Steinert Hall on Boylston Street and wonders what will become of it.

He turned his focus to K-12 math after becoming frustrated by the middle school math instruction his daughter was getting in the Cambridge schools.

Using proceeds from a MacArthur Foundation “genius” grant he was awarded, in 1982 he established the Algebra Project, a nonprofit focused on boosting math “literacy” among Black school children. By 2001, it was serving 10,000 students in 28 cities.

Seniors at a city-sponsored event 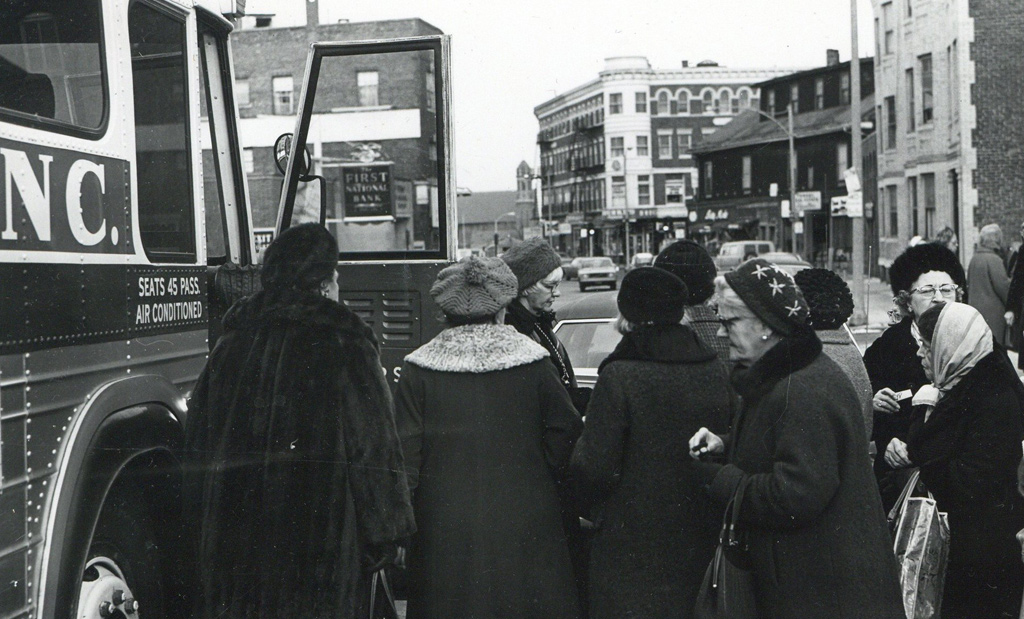 The folks at the Boston City Archives wonder if you can place this photo of Boston seniors at a city-sponsored event. See it larger.

FBI files reveal: Edward Brooke lost out on his first civilian job with the federal government after the FBI concluded that while he wasn't a Communist, he knew some 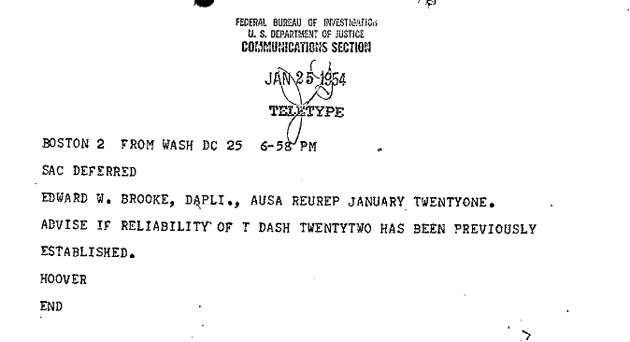 J. Edgar Hoover asked about the reliability of informant T-22 in the Brooke investigation.

On April 8, 1954, Helen Brooke wrote a plaintive letter to Mamie Eisenhower, one mother to another: Was there anything the First Lady could do to get her son, Edward, unclassified as a "security risk," so that he could get the job as assistant US attorney in Boston the Justice Department had offered and then rescinded after an FBI investigation concluded he had consorted with Communists? Read more. 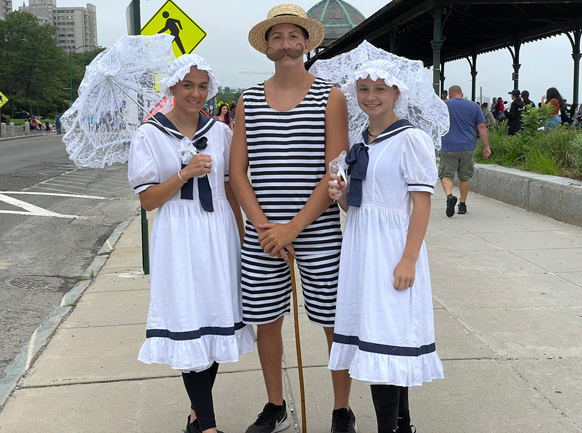 Time was, delivery vehicles got by on just one horse power 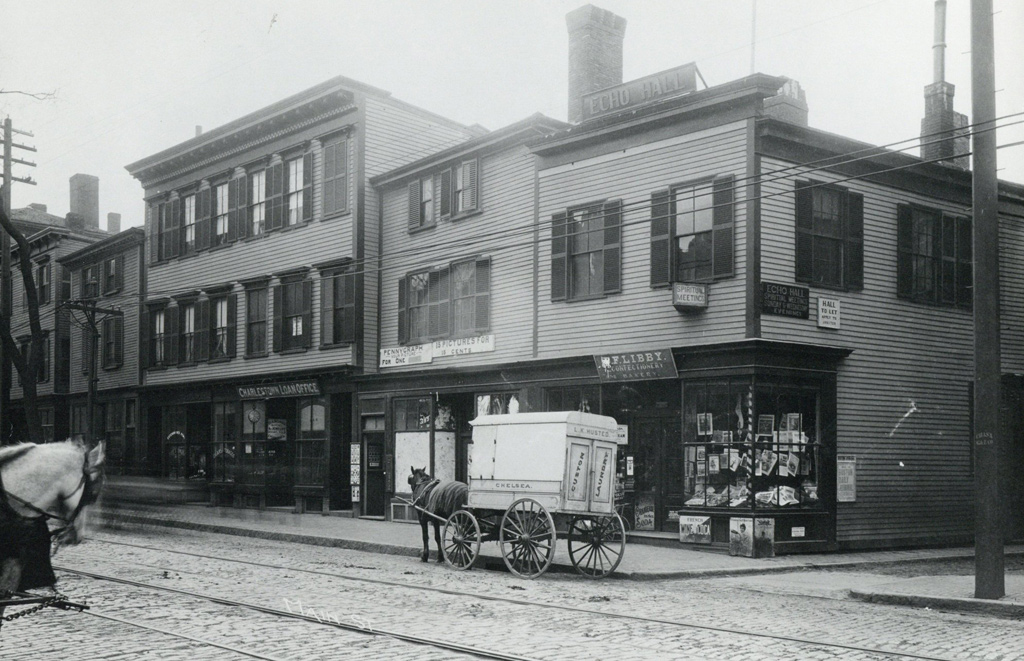 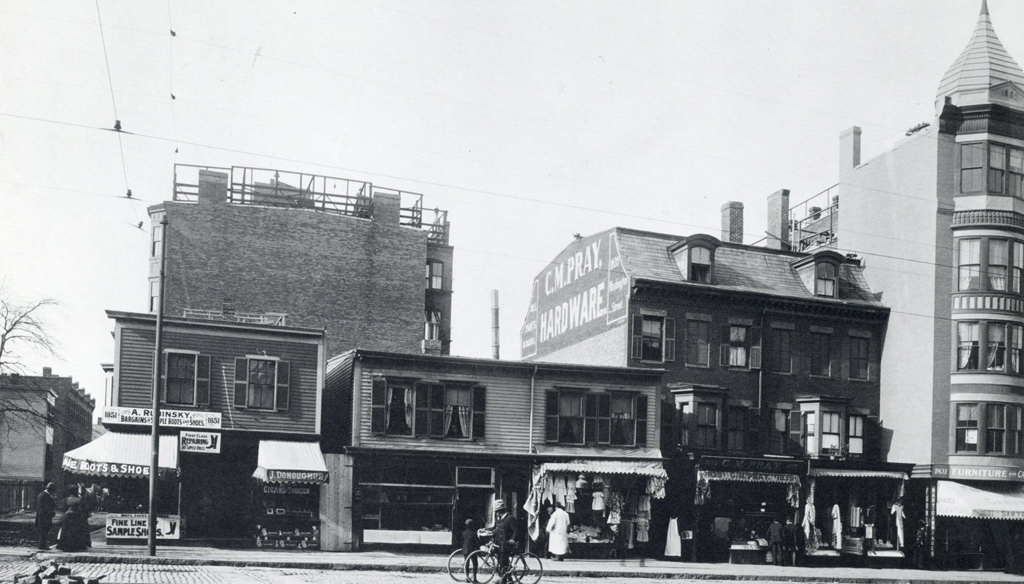 When a 17-story condo building in Brighton collapsed during construction

Four workers died and 30 were injured when 2000 Commonwealth Ave., near Chestnut Hill Avenue, collapsed during construction on Jan. 25, 1971. Some photos.

The entire structure was torn down the next year and replaced with the building that still stands today as a BC dorm.

Once, kosher restaurants weren't that uncommon in parts of Boston 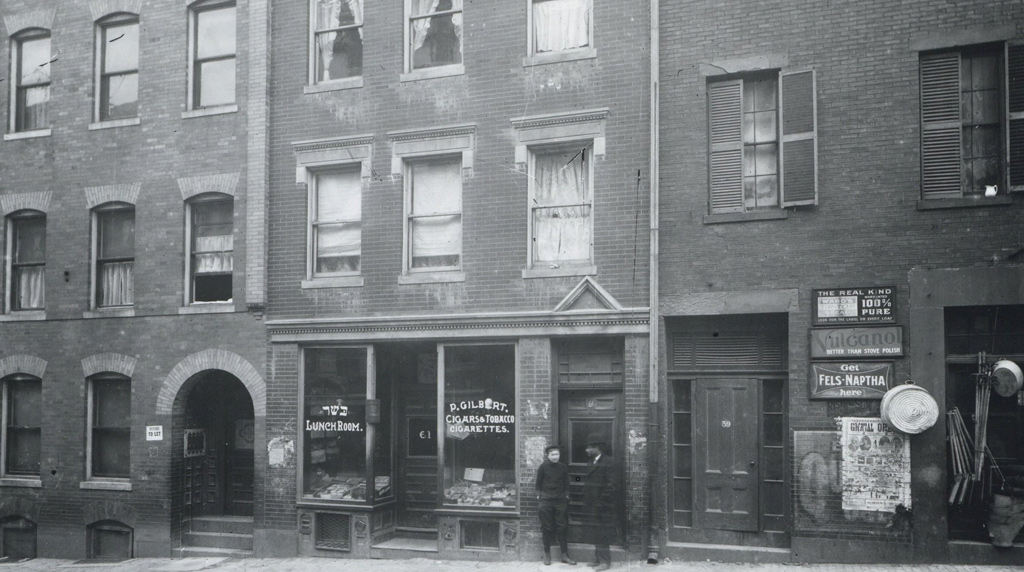 No, a goat didn't butt its way into the Battle of Bunker Hill

J.L. Bell has spent the past few days rebutting the story that the Royal Welch Fusiliers may have lost the Battle of Bunker Hill but gained a goat that had wandered into the battle.