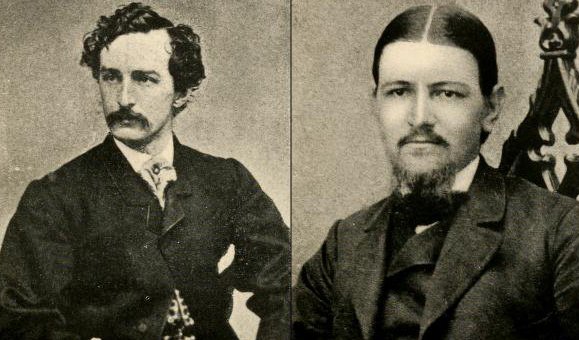 Before he became Abe Lincoln's assassin, John Wilkes Booth was a well known actor who so liked performing in Boston - at the Boston Museum theater on Tremont Street, next to the King's Chapel Burying Ground - that he bought a parcel on Commonwealth Avenue in the newly emerging Back Bay to build a home.

And before Boston Corbett became the man who fatally shot Booth, he also spent a fair amount of time on Tremont Street, walking from his job as a hatter across from Faneuil Hall to the Bromfield Street Church, where he was a member, and from the church to North Square in the North End, where he did street preaching.

The two may never have actually crossed paths on that short three-block stretch of Tremont Street - Corbett left Boston in 1861 to enlist in a Union regiment in New York, while Booth didn't do his first Boston performance until a few months later, in 1862. But it's possible: Booth's older brother, Edwin, was also an actor and had been performing at the Boston Museum at 28 Tremont St. for years.

Boston Museum in the 1880s - down the street from the trees of the burying ground and the Parker House (source):

Maybe John Wilkes Booth came up from Baltimore to watch his brother - and maybe he stayed at the Parker House, where, in 1864, he would meet with Southern spies to talk about kidnapping Lincoln, and where, in 1865, he stayed for several days while preparing for his trip to Ford's Theatre.

If so, then it's possible the two at least spotted each other. For Corbett was a well known local figure, a rather annoying and odd one, who was a street preacher in part because people at the Methodist Episcopal church on Bromfield Street couldn't quite bring themselves to just bar him completely, but were able to persuade him to spend less time in the church and more time outside.

Born in London in 1832, Corbett grew up in Troy, NY and became a hat maker - which meant exposure to the mercury then used to make hats, and which was known to create actual mad hatters. He married, moved to New York, his wife died in childbirth and he became a heavy drinker.

In 1857, he somehow wound up in Boston, where a street minister affiliated with the Methodist Episcopal Church on Bromfield Street persuaded him to give up drinking and look to God. He changed his first name to Boston in honor of the city where he felt he had been saved, and grew his hair long, since that's what Jesus did. And he joined the Bromfield Street Church, from where he had been lifted up.

After he became Boston, Corbett got a job working for another hat maker - so more exposure to mercury - Samuel Mason Jr., on Washington Street at Dock Square - roughly where City Hall is today. He carried his religion onto the factory floor - responding to cursing by stopping what he was doing and kneeling in prayer, and sometimes song. Given that the shop was set up in a sort of assembly line, and given that workers were paid by the piece, this did not endear him to his co-workers, according to Byron Berkely Johnson's Abraham Lincoln and Boston Corbett.

When off duty, he'd spend much of his time in North Square in the North End, giving sermons and handing out religious literature, Johnson wrote.

On July 16, 1858, two prostitutes tried to "inveigle him from the path of virtue," Johnson wrote. Disturbed by the surge in his loins, Corbett rushed to his room in a boarding house, turned to the book of Matthew and began reading about plucking thine eye out and eunuchs "that made themselves eunuchs for the kingdom of heaven's sake." He found a pair of scissors, opened himself up below the belt line and pulled out his testicles. He then went out for some dinner and a prayer meeting at the Bromfield Street Church, followed by a walk over to Massachusetts General Hospital - where he spent the next month recuperating from his self-surgery, Johnson wrote.

In 1861, after war broke out, he moved back to New York and joined a Union regiment. He didn't get along with his fellow soldiers and commanders any better than he did with his Boston co-workers - in fact at one point, he was sentenced to execution for insubordination after he took a commander to task for blaspheming. The sentence was commuted, he was drummed out of the army and he promptly re-enlisted in another New York regiment - and then re-enlisted again even after he was captured, sent to the notorious Andersonville POW camp and exchanged in a prisoner swap.

Shortly after Lincoln's assassination, with a promotion to sergeant, he was in a regiment assigned to track and find John Wilkes Booth, who, despite breaking his leg jumping from the box where he'd shot Lincoln, managed to evade capture for several days.

Booth himself was something of a black sheep - a Southern supporter in a family of Union backers, although that was of little import until 1860. Like his father and his brothers Edwin and Junius, John was an actor. After the war erupted, he traveled across Northern states performing tragedies.

The Boston Advertiser was not enamored of Booth's work in Boston, mainly because he didn't pronounce words the way it felt he should (May 22, 1862):

Booth liked Boston so much that in 1863, he took some of the money he'd made by investing in Pennsylvania oil companies - $8,192 - and bought a parcel at 115 Commonwealth Ave., between Clarendon and Dartmouth. He also spent $1,500 to buy stock in the Boston Water Co., which was the concern creating the neighborhood out of what was once part of the Charles River.

Booth never had a chance to build his house, given his newfound determination to either kidnap or assassinate Lincoln. In addition to his meeting with CSA Secret Service agents at the Parker House in 1864, he stayed at the Parker House on April 5 and 6, 1865, ten days before he traveled to Washington, DC - and spent some time practicing pistol shooting at a shooting gallery next to the Parker House on School Street. The night he shot Lincoln, his brother Edwin was performing at the Boston Museum.

Booth and Corbett came face to face on April 26, 1865, when Corbett's regiment surrounded a barn where Booth and his last uncaptured co-conspirator had taken refuge. The other man surrendered, but Booth refused, so the regiment set the barn on fire, hoping to force Booth out. But still he refused to come out. Despite orders from Secretary of War Edwin M. Stanton himelf to take Booth alive, when Corbett spotted him through a large gap between the barn's slats, he raised his pistol and fired, hitting Booth at the base of his head and leaving him with injuries that would kill him within a couple hours.

When asked why he disregarded orders, Corbett replied, "Providence directed me."

He was initially arrested for disobeying orders, but soon released as a hero - Matthew Brady took his photo and he was granted part of the reward money for Booth's capture. He returned to Boston, but soon left and drifted west, eventually winding up in Topeka, Kan., where the state House of Representatives made him an assistant doorman - until he became convinced other officers were out to get him and pulled a gun on them. He was captured and sentenced to the Topeka Asylum for the Insane, from which he escaped. After a brief stay with a friend in a nearby town, he disappeared, never to be seen again.

Edwin Booth was scheduled to perform a matinee the day after Lincoln's assassination. The show did not go on. But Bostonians rallied around him - he had been a strong Union supporter before the war and an investigation cleared him of any connection to his brother's actions. He eventually bought the Boston Museum; when he opened it for the first time as owner, he got a two-minute ovation. After he died, he was buried in Mount Auburn Cemetery in Cambridge - next to his wife, an actress he had met at the theater, and their first son.

Thank you so much for this article!

I love this historical stuff. Oh, and "inveigle him from the path of virtue" is one of the best phrases I ever heard. :-)

We say whip and what like working class Londoners instead of properly with a hard H like ... um ... someone, somewere, pronounces it ... I guess ?

I grew up in Western Mass, and say the H's in those words. When I met my husband (from Arlington) he noticed and teased me about it right away. Now I know I speak proper English - though I always knew anyway) /s

3. Was afraid to nut

Which prompted me to read about the origins of the use of mercury in hat making. Seems our friends in CT suffered the Danbury shakes
...
Connecticut, an important center of America’s hat-making industry until men's hats went out of fashion in the 1960's, developed its own reputation for madness. Regionally, the "Danbury shakes" were a commonly recognized series of ailments.

Back in the '90s WGBH used to play a (very scratchy) recording Booth made of The Christmas Carol. Even through the scratches and crackles he had a wonderful voice.

Was later purchased by George Walker Weld. Apparently a distant relative of our former governor, but I can't find the exact relation. Possibly a cousin of his grandfather. Also the uncle of Larz Anderson's wife, helped found the BAA and build the Weld boathouse at Harvard.

Interesting all the connections of famous people at that time.

Great article and thank you!!

Thank you for writing such a fascinating article!! Loved it!!

---
I may have missed it in the story Adam posted but Mary Todd Lincoln stayed at the Parker House around the same time as her husband's assassin. Booth was also seen taking target practice with his pistol at a gun club nearby. The history of the Parker House and those who passed through is a story in itself. From Ho Chi Minh, Malcolm X and Emeril on the staff (among others) and Mark Twain and Henry David Thoreau (visited once, didn't like the cigarette smoke) as guests.

...at 26 Chestnut, now divided up into apartments. He also bought a building in Gramercy Park NYC and founded The Players Club reserving the top floor for his own private use. He died there in 1893.

Didn't Edwin save Robert Lincoln's life - a fall from a railroad platform or train steps?

Four charged with slicing, tasing, beating man on the Red Line in robbery attempt; one also charged for crowbar beatings, robberies on the Green Line
Man winds up under Red Line train at Park Street
Sunday sunrise
How a former Saudi official got enough money to buy eight luxury condos in Boston to remain a national-security secret
Short video sums up the T experience these days
Healthy-ish, not too expensive meals downtown