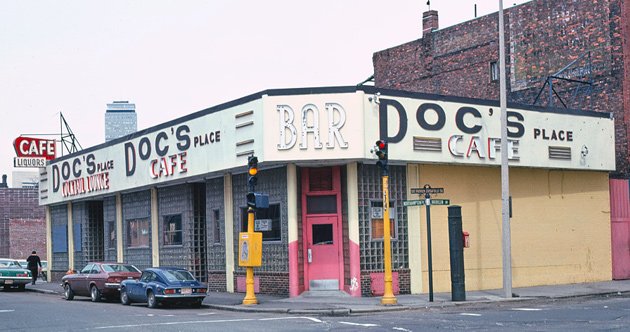 Doc's Place back in the day.

The Library of Congress's John Margolies Roadside America Photograph Archive includes a couple of photos of Doc's Place at the corner of Northampton Street and Harrison Avenue.

Compare to the view yesterday:

Both of Margulies's photos are labeled "late 1930s," but that possibly refers to when the building was put up, not when the photos were taken, since Chevy Vegas, the Pru and the concrete apartment building across from Boston Medical Center, which are all shown in them, didn't exist back then. Plus, in the 1930s, the place was a bar with the basic Boston name of Sullivan's Tavern.

The story of 53, 55, 55A and 57 Northampton St. and 857 Harrison Ave. - which collectively make up the old Doc's property - is the story of the ever changing face of a modern American city. Over the course of more than 100 years, the lots have changed from tenements to a store to a shoe factory to a series of bars.

By the time Margolies had photographed Doc's, it had changed from your basic Boston bar to a rock club known well enough in local circles that at least one band - the Turbines - included it in both lyrics and a video to go with them.

City records show Doc's opened in 1972 or 1973, after three local men bought Johnny Corey's Cocktail Lounge and Cafe. The sale came several months after Johnny Corey's manager, a 22-year-old from Roslindale, was shot in the stomach in the bar's parking lot by two men who robbed him of the $5,000 in cash he was returning to the bar with from a nearby branch of the National Shawmut Bank.

Johnny Corey's had been open since at least the late 1940s.

Over the years, it ran help-wanted ads for bartenders in the Globe. At first, experience was required, but by 1962, job seekers no longer had to have experience, but "married man preferred."

Before Johnny Corey's, the site was home to a place owned by Bartholomew Sullivan, who opened not long after repeal of Prohibition. At first, he called the bar Sullivan's Tavern, but in 1942, he won approval from the licensing board to rename it Bart Sullivan's Tavern.

From a 1934 Building Department inspection:

During Prohibition, of course, the place was not a bar - although the Globe records one man being arrested for selling alcohol out of a bottle in front of it. Instead, at least before repeal, it served as a neighborhood store.

Globe archives show that in 1928, two men were arrested for breaking into the store - one after having escaped the Deer Island jail by rowboat. In 1932, a man was sentenced to a month in jail for punching the store owner in the face - because he objected to the man asking him when he'd pay up for a couple of packs of cigarettes he'd gotten a couple weeks earlier. City records show that in 1927, meanwhile, the owner was cited for installing a sink without a permit.

In 1923, 55 Northampton was home to Green Shoe Mfg., which placed a "female" help wanted add for a "first-class machine presser on glass folder."

Going back even earlier, the lots were home to tenements. According to a Globe story, one of the more notable residents was Peter "One Arm" Whalen, who got his name for having just one arm. In 1864, as a five-year-old, he lost an arm (and part of a foot) when hit by a train in the South End rail yards - which resulted in him becoming the first patient at the newly opened Boston City Hospital. Later, he spent 40 years running a newsstand at the hospital - and was the first to suggest to his neighbor from down the block, James Michael Curley, that he run for office.

Coming back to more recent times, by the late 1990s, Doc's, with a maximum occupancy of 222, was running out of steam. In 1998, the owners dissolved the company that owned the bar. In 2000, Stanhope Garage of Allston bought the parking lot and bar and won city permits to empty out the bar, add a car entrance off the parking lot and turn the building's shell into a 28-space garage.

The company blocked off the old entrances and exits, but kept the front entrance's columns and the Northampton Street side's wall of glass bricks.

Yesterday afternoon, the garage was empty.

Marguiles's other photo, looking down Northampton towards Harrison:

But Jared Katsiane reports that if you keep your head down and stand right in front of the stoop where the entrance used to be on Harrison Avenue, you can still see a glimmer of the old, old place:

soon to be replaced by ugly

soon to be replaced by ugly generic high rise building

I found a photo on Google of

I found a photo on Google of a postcard of Johnny Corey's. Pretty cool!! I haven't quite learned how to upload the image. You can see yourselves on Google images.

City history in the history of a lot

Thanks for this, Adam!

Nice note regarding the 1927 permit-less sink installation. And people complain about the permitting process as if it's something new.

Is that you can look up such permits and citations dating back to the 20s online (start here, there's one database for stuff before 2009 and another for stuff after that). At least for the pre-2009 documents, though, if you simply search on an address (if you live in an old house, it's fun to look up the old records), make sure on the search form to check off the "document type" and "date" fields, otherwise, you just get back a long list of checkboxes with no idea what they might be for or when (and even then, as I found out here, the older stuff won't have any info on the results page to help you figure out if calling up the document might be worth it).

Jared Katsiane forwarded a photo he took of the stoop where the front entrance used to be.

Can anyone upload the Johnny

Can anyone upload the Johnny Corey's postcard image on Google images for me? What's great is that it show what the inside used to look like!!

It's probably past its copyright date, but I'm reluctant to post something that is on a private for-sale site, just in case, to be honest.

Love this look back...

Admitting those days were hazy, but the Turbines video reminds me of Saturday nights Live at Docs/Bat Cave? Sunday night dance?

Following the El along Washington to the Empire (?) or some Deli became the Bohemian Club on Saturdays + great spin

...and south on Mass Ave was Uptown (and maybe another club), part jazz...disco...punk, given the night?

Good times to live in the neighborhood.

In hot Boston development market, even Mass and Cass is worth a shot
Man shot in the thigh on West Concord Street in the South End
The Gallows hangs it up
Allston gets deer, Brookline gets turkeys and the South End gets: Bugs with googly eyes
Paralyzed pet left to die in Peters Park
Man arrested as Methadone Mile drug dealer is released, arrested again as Methadone Mile drug dealer two weeks later; DA vows crackdown