Another apartment building proposed near Ashmont T stop, this one aimed at young professionals with no kids 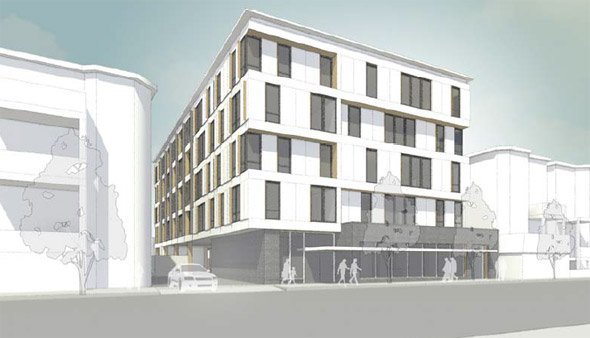 A developer and a neighborhood business group have filed plans with the BRA for a 64-unit apartment building across from the Ashmont T stop in Dorchester.

The proposal, by Peregrine Group LLC and St. Marks Area Main Street, calls for the replacement of the long shuttered Odwin Learning Center at 1943 Dorchester Ave. and a parking lot now used by patrons of Tavolo with a five-story building that would also have first-floor commercial space.

The Codman Square Health Center, which has agreed to sell the Odwin parcel, would get first dibs on part of that space for a neighborhood clinic, according to the BRA filing.

The building is across the street from the Carruth building and on the same side of Dot. Ave. as the proposed 87-unit TOD II building on the Ashmont Tire site.

Most of the apartments at 1943 would be studios, with 18 one-bedroom units and 4 two-bedroom units. A total of eight apartments would be marketed as affordable, for people earning up to 100% of the area median income, with the rest rented at market rates.

The building would have just 24 parking spaces, which Peregrine says emphasizes its "transit oriented" nature, being across from a Red Line station and all.

The building is designed to complement the neighborhood’s architectural character both along the more commercial Dorchester Avenue frontage and the residential scale of the surrounding Ashmont Hill/Ashmont Valley neighborhoods. The building is constructed as a single structure. The presentation to the street is appropriate to the scale and character of each streetscape. The building will thoughtfully address the existing residential 2‐4‐family homes as well as the more dense newly constructed/planned buildings of the Carruth and TOD2. It will incorporate design elements including articulated massing, materials and a continuous storefront at the street level to complement and connect to the planned residential and commercial spaces so that the development reads clearly as one deliberate mixed-use development.

The residential building design elements both inside and out will create a high quality living environment for young urban professionals, graduate and medical students, young families and empty nesters. As part of the greater Ashmont/Peabody Square revitalization efforts sponsored by St. Marks Area Main Street, the project will incorporate visual and streetscape elements designed to encourage pedestrian flow throughout the residential and commercial components of the development logically connecting the site together with the vibrant retail, restaurant, transit, parking and open space amenities located in the greater neighborhood.

Developer submitted these before and after images of how the project would improve Dot. Ave. through the addition of sidewalk plantings, seats and 300% more hipsters:

I'm on the younger side, but I am raising a family in the area and I am totally ok with TOD II, but this is taking things way too far. This does not ease the housing pressure in the area it just makes the area attract more of the exact demographic that is making rent prices go up everywhere in the city. Ashmont needs more housing stock for families especially as they are the ones pushed further away from the downtown area.

Some posters below point out that this area (and Boston as a whole) really lacks studio, 1BD, and 2BD units. People who would prefer to live by themselves end up needing to find roommate(s) and rent 3BD/4BD units that families would otherwise be living in. It's easy for three young professionals with no kids to outbid a family, even one with two incomes.

This does not ease the housing pressure in the area it just makes the area attract more of the exact demographic that is making rent prices go up everywhere in the city.

Where do you think this demographic is going to live if we don't build housing for them? Do you think they will just stay in Seattle? Maybe a few who can afford the downtown/seaport towers will rent units there, but most will just follow the typical paradigm above and rent out a family-sized unit with roommates in Ashmont, Brighton, Cambridge, or wherever.

Gentrification isn't going to pass over parts of the city that don't build new housing. It is going to come at them harder and faster until Boston looks like San Francisco, with charming old homes that no one without a trust fund can afford to live in.

As a graduate of a Boston college that never left the area, you are spot on. There is a severe lack of affordable one bedrooms. I would kill to get one!

Instead, I'm in my late 20s and occupying a 3 bedroom that could easily fit a family with 2 roommates, as it's the only thing that I can afford.

Look at the filing again

Of the 64 apartments, 60 will be either studios or one-bedroom units. That doesn't leave a whole lot of room for young families.

They snuck that past me

Imagine, a press release loaded up with fresh BS.

My wife and I are a family,

My wife and I are a family, even though we don't have kids.

Yes, you are a family

However, surely you realize that when city planner/housing types talk about "family housing," they are referring to people with kids. Same idea as with "affordable" housing, which is not, in fact, affordable to everybody.

Great! More people means more people using t going to shops and adding to the vibe of the neighborhood. Good luck to the developers - and looking forwar to the ashmont tire project getting started

Wow, that's a lot of studios. The developer should market them as "micro-units"

"We don't want more people in the neighborhood, especially single people with no kids," is a lovely sentiment.

Approaching the uncanny valley from the other side.

Dorchester is in desperate

Dorchester is in desperate need of small housing (and density in general) There is a lack of 1-bed and studio units leaving single people or a couple to rent a larger 3-bed unit with another person or two. Forcing the rents up and pricing out families. It happened in Allston/Brighton and it's happening now in Dorchester. Try finding a one-bed that's not an illegal attic or in-law apartment. It's very difficult.

Dorchester has plenty of 2,3&4 bed apartments.

And really the larger issue with family housing is lead paint. I make a decent income, credit in the 800s but with a 4-yr old I am a rental leper.

And yes the hipsters have discovered Dot and I'm not sure how I feel about it.

Nice way to say you live in East Providence.

As someone who grew up steps from here and knows the site well, this massing along the street is ok, but there is too much parking with this proposal. You are steps from a train. Have fun watching the hookers working in cars in the back part of the lot. Also, the entrance / egress from the site will chop your cars into little bits with the traffic flow on this section of Dot Ave.

I would love the architect to offer up where those photos came from. That is not the Johnny's Pizza block nor do the photos account for the 11.7 million cabs that ply their trade in front of the station, and the three apparent Caucasians are not exactly demographically true for the block between Ashmont and Fuller. .

Good luck. We are now moving off into plaid for Ashmont developments. 1980 Dorchester Ave has been gutted. TOD II is about to get going, and this project is proposed as well as two other redevelopments on or near Peabody Square are in the works. Whomever is last developer standing when the market starts to go down is going to have to get very creative to hold onto their money.

Mr Costello perhaps you don't frequent the area - across the street is the carry th bldg. and Beale street area. Cabs don't park on this side as much as they do closer to Peabody sq. so negative - they are architectural drawings folks - the building isn't built yet and with creative landscaping it could def look like this. The current space is ugly like a gaping tooth in the smile that is the admonition station area

certainly dominate the adjacent buildings - it could do more to fit in or continue on assuming that they'll eventually be torn down also.

why choose dot 2 dot to show the improvements? it has nothing to do with this site.

Good observation; Until you

Good observation; Until you pointed to it, I hadn't noticed that is was a picture of the Dot to Dot cafe storefront (more than half a mile down the street). Makes you wonder about the developer's knowledge of the area. Hopefully they'll give the right street address to the excavation company,,,

Am I the only one that thinks this is Fugly?

I know it's just a drawing, but this looks like a big Styrofoam box. What's with the lack of color?

I grew up in this area in the 60's-70's and it was a dump. To see it come back to life where people can actually enjoy their surroundings would be good. I would love a place there as I'm a single prof heading toward retirement age

if you want to go:

Not quite as advertised

I live very near here and when this proposal was submitted to our neighborhood association for endorsement, we were told it was going to be nearly half the size at thirty-eight units. Needless to say, we're planning on attending the BRA meeting.