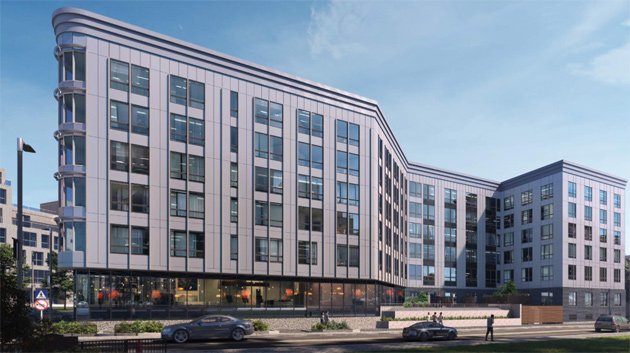 Correction: The story has been updated to reflect the fact that the new owner will follow the regular public process for development and that the proposal seeks will have 17% of its units as affordable. Also, while the developer was formerly called Novaya, it is rebranding as Foxfield LLC.

A condo project at 270 Dorchester Ave. that was first approved in 2017 but which is currently South Boston's version of the old Filene's hole could finally get built under a new owner.

Foxfield, LLC, headquartered downtown, says it has a purchase and sale agreement for the project.

In a filing yesterday, Foxfield asked the BPDA to approve a "notice of project change" to let it construct the building. It says it will follow the BPDA's normal public participation policies.

The developer would decrease the number of parking spaces from the originally approved 120 to 70 - but says that would come entirely through eliminating 50 spaces that were originally planned for a car-rental facility.

Foxfield says it would continue to sell 17% of the units as affordable - under the area's new zoning, which lets developers put up larger buildings than otherwise allowed in exchange for exceeding the city's normal 13% affordable-unit requirement.

Foxfield would also shrink the ground-floor commercial space from 6,590 square feet to roughly 2,250 square feet, but said it would continue to honor Edwards's commitment to lease the space to Ultimate Self Defense, which provides karate training for local youth.

are architects finally embarrassed about the crap they’ve been designing the last 10 years?

Coastal Zone Management has a new toy for looking at these things. Seems the Haul Road is a channel wannabee.

Probably can design around it given that the rest of the area is high and dry to 6' of increase.

South Boston bar and building owner wins approval for new East Broadway building - on condition he doesn't put a bar in it
7 not so lucky for South Boston commuters
Broken Coconut, broken promises: The cases against Aaron Sells
Putting the 'sea' in Seaport photos
Final tally in that South Boston condo: Remains of four infants recovered
Out of control Gen Zers and teens recklessly careening down the streets of South Boston in Stop and Shop carriages, outraged councilors say