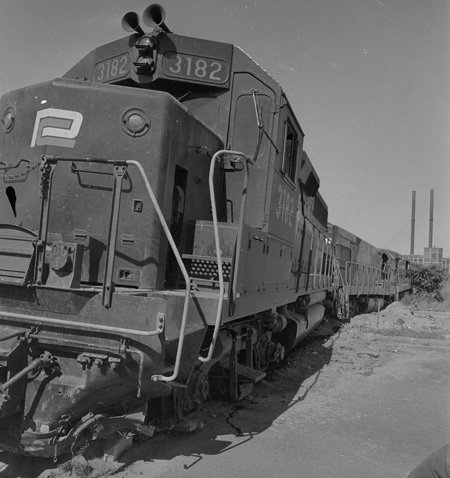 Then: Engine 3182 stuck on and in the Expressway.

On Aug. 21, 1969, three locomotives being readied to haul freight to Albany, NY escaped what is now the Cabot Yard in South Boston and barreled right into the Southeast Expressway, carving deep grooves in the roadway before they came to a halt and blocking northbound traffic.

Michael William Sullivan reports that the lead locomotive, a General Motors in the runaway express remains on the rails and doing hard work, now down in New Jersey.

Sullivan, who works in New Jersey Transit's Hoboken Terminal, says that what was then Penn Central engine 3182 is now NJ Transit engine 4210.

He says NJ Transit picked up the engine in 1994, after it was converted for passenger service, that it went on a run out of Hoboken this morning and will likely still be running for another 10 years.

"Sure they're old and tired but they're the easiest to fix and put back in service," he writes.

He adds a history of the locomotive's transformation from Penn Central 3182 to NJ Transit 4210:

It was built as PC GP40 3182 for the Penn Central in October, 1968 at EMD's LaGrange, IL plant with the serial number 34624. This means it was still somewhat factory fresh when it ran away.

It was inherited by Conrail on April 1st, 1976 where it became CR 3182. Conrail retired it in the mid-'80s as part of a massive purge of older locomotives. It sat on mothballs in Altoona, PA for a long time while they figured out what to do with all of these engines.

In the early '90s NJ Transit needed a lot of new locomotives as part of a huge modernization project that was well underway. Conrail had already rebuilt a handful of older GP40Ps that NJ Transit inherited from the Central Railroad of New Jersey into GP40PH-2s and they wanted more like them.

Conrail offered to rebuild a bunch of their retired GP40s for NJ Transit they ended up ordering 19 of them. 3182 just happened to be a part of that batch of rebuilds.

3182 was extensively rebuilt at Conrail's Juniata Locomotive Shops in Altoona, PA where it had its frame extended and had a secondary HEP (Head End Power) motor installed that would provide power to passenger cars for lights, HVAC, and whatever else the cars needed. It arrived at NJ Transit in May of 1994 as NJTR GP40PH-2B 4210 and is still in service to this day with no definite retirement date in sight.

Do they use 53-year-old diesel engines in their busiest transit systems?

When I first visited Germany as a high school exchange student in October 1991, the Deutsche Bundesbahn (one of two precursors of today's Deutsche Bahn) was running some pre- and immediate post-WWII equipment in commuter service in the Mannheim area (maintained and regularly overhauled, of course). This was a mere three years after the former East Germany's Deutsche Reichsbahn (the other precursor to today's Deutsche Bahn) stopped using steam locomotives on its mainline services. They still used steam power on some branch lines that that time (some still do, but they have since been spun off as privately operated quasi tourist attractions (while also acting as scheduled essential rural public transportation)).

Was the WWII-era equipment

Was the WWII-era equipment electrified?

East German railroads in 1991 should not be a model for a modern service.

And you can bet they’ve done some upgrades in the last 30 years.

Most Locomotives end up

Most Locomotives end up having extremely long service lives, due the the completely and expense of building new ones, a lot of old engines are rebuilt to serve a new purpose, take the Pennsylvania Railroad GG1 electric locomotive, they were introduced in the 1930s and they stayed in service through the PRR, Penn Central, and Amtrak all the way into the late 70s, the EMD F7 a streamlined diesel introduced in the late 40s has been rebuilt several times into F9s and CF7s and are still in use today on many railroads.

Yeah it’s quite expensive though

By first world standards, the

By first world standards, the Northeast Corridor is a slow branch line with a skeletal infrequent service.

Except, of course, for the ticket prices.

The US is not just devolving to uncivilized regions (Florida, Texas), but leads the world with inefficiencies. The MBTA is a great example. Couthouse Station is a disaster. All automated transports shut down on the busiest side of the platform. For anyone who can't manage the steps the T worker smiles as he knows that you have to wait for another tarnish line bus, go to the next stop, wait for yet another tarnish line bus.

Why? Because he, unlike a chicken, does not know how to cross a road.

The Courthouse Station has been under reconstruction for over a year. A shiny tunnel of a quickly dingy turning bus stop.

Perhaps the T needs to start training their employees to actually see what is in front of them. Not all is bad but there is plenty that needs fixing.

Another cool thing about NJ Transit

All the doors open on all the cars when they pull into the station, so you don't have to run 4 cars down to board the train or wonder which random car will open it's doors!

NJ Transit is well off their peak* but one of the shocking things about coming to Boston was that you need to find a door with a conductor to get off the train.

On NJT trains the doors just open. They trust the passengers are adults who know how enter and exit a train.

*As recently as the 90s NJT had one of the best commuter rail systems in the US. But then governor after governor cut funding and now NJT is in rough shape. Sound familiar?

I agree - commuted on NJT

I agree - commuted on NJT rail in the mid-late 90s. You could set your watch by them.

Be fair - governors didn't just cut funding. One of them left trains parked in a sea-level waterfront yard in the path of a hurricane (Sandy) instead of moving them to high ground inland. Actually, that one is probably better laid at the feet of NJT management of the time. Shirley DeLibero had (unfortunately) moved on years before.

I 100% agree, but '4 cars down' might be generous of you. Usually it seems like it's the farthest possible door on the whole train, so that by the time you've passed the first few cars, you wonder if you're going to make it at all. Or how this door system could possibly be any dumber :)

For some stupid reason, the

For some stupid reason, the mini high platforms at outlying South Side stations were built at the outbound end of the platform. So the outbound car is the one they open off-peak, maximizing your walk from the South Station lobby.

There’s no easy way to fix this, since it would involve big construction at dozens of stations.

It doesn’t help that they don’t pull the train all the way to the end of the track at South Station. They do this to keep the engine exhaust from accumulating under the bus terminal.

My suggestion: scrap the diesel belching behemoth trains. Buy DMUs with proper emissions controls (like your car got in 1984), and run them as single cars off peak. With a single employee. The other employees can run their own single-employee trains. Bingo, triple the schedule frequency with no increased operating costs.

That is, until they can wire the whole system and run EMUs.

is supposedly difficult for systems with varied platform heights. The doors themselves aren't a big issue, but apparently the traps can be dangerous if operated remotely. It used to be that passengers were allowed to open the doors and traps, so any door was viable. Some FTA regs got in the way of that.

will that burned Orange Line subway car be in service somewhere (hopefully not still here)?

The OL trains have held up amazingly well given their age and the number of miles they’ve traveled. Image telling someone in 1980 the same cars would still be in use in 2022. And that one would catch fire on the bridge overlooking the Casino in Everett.

(Actually, Everett is exactly where people of 1980 would have assumed a MA Casino would be located.)

When I was an undergraduate there were some cars on the Blue Line that were reportedly the oldest subway cars still in use in the world. They were 50 years old. They had been the first cars acquired for the Blue Line when it became rapid transit (as opposed to a streetcar-subway like the Green Line)

The 01500-01600-01700 "Silverbird" Red Line cars were brand new and shiny and they were the T's only air-conditioned cars (excluding commuter rail, which didn't really feel like the T yet). They were also the first cars acquired by the MBTA after it took over from the MTA.

The next question is

Does anyone think the new series of Red and Orange Line trains assembled in Springfield will still be hauling passengers around Boston in 2065 or even 2075?

I'm skeptical. But I'm also skeptical they'll make it to 2030 at this rate.

Governor AJ Baker in 40 years or so.

They were made by the St. Louis Car Company. I remember some graffiti on a wall that said "Boston -- where St.Loius gets the blues".

The MBTA Commuter Rail back then was running a mix of ex-Boston and Maine Budd Rail Diesel cars, ex-New Haven Silverside coaches, and they even had some ex-PRR P-70s, although I never actually rode on one. The seats on the Silversides were very comfortable; they had formerly been used on Northeast Corridor runs between Boston and New York.

Sullivan forwarded some details of the locomotive's transformation from Penn Central to Conrail to NJ Transit; added to the post.

...who worked at the Lagrange, IL EMD plant. Somewhere I have various rolled-up prints of some of the locomotives they made.

You see them once and a while leading trains out of, or pushing them into, South Station.

Broken Coconut, broken promises: The cases against Aaron Sells
Putting the 'sea' in Seaport photos
Final tally in that South Boston condo: Remains of four infants recovered
Out of control Gen Zers and teens recklessly careening down the streets of South Boston in Stop and Shop carriages, outraged councilors say
Additional human remains may have been found at South Boston house where a dead baby was found in a freezer yesterday
Fetus or body of young infant found in South Boston freezer