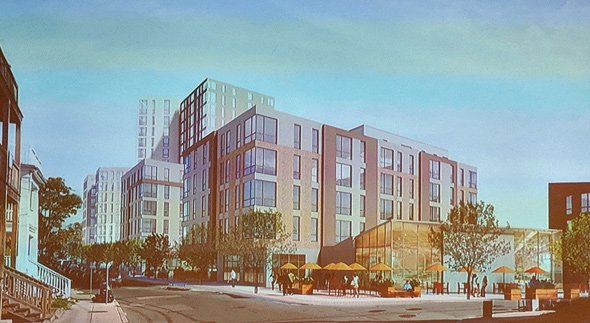 The owner of the building that now houses the Garage nightclub, day-care facilities and offices on Linden Street in Allston wants to tear the whole thing down and replace it with a complex of three buildings - one 14 stories tall - housing 300 apartments, 53 condos and a neighborhood cafe or shop.

Skeptical members of the Brighton Allston Improvement Association told Partners Properties, which has owned 20 Linden St. for 20 years: Whoa, not so fast. Especially with City Realty planning its own large project, including a new condo building to replace the Jack Young building at Cambridge and Linden - the neighborhood of single- and two-family homes along Pratt Street risks being overwhelmed, they said.

Johanna Schneider, attorney for the building owners, started the meeting by trying to head off the frowns. She said the area along Linden and Pratt isn't really all that great now - it's full of students and, frankly, parts are "quite unsafe." The new project represents "an exciting opportunity" to begin to reshape the area and make it as desirable as all the other parts of Allston that real-estate investors are pouring money into. She added that the plans are not cast in stone, that Partners Properties has not yet even filed a formal application with the BPDA and that the company hopes to have an extensive dialog with neighbors about what to do with the property.

David Chilinski, the architect on the project, said that among its benefits would be making Linden Street less claustrophobic: The buildings along Linden would have two large courtyards in front - with an area for Uber and Lyft drivers to pull into - which would ease what now seems like an incredibly narrow canyon. The company would also bury all of the utility cables now strung along poles on the street, providing more room for pedestrians, he said.

In addition to the 2 1/2-story office building along Linden, Partners would also tear down five houses along Pratt Street, to make way for the condo building

One resident called Schneider disingenuous for suggesting the neighborhood is in poor shape, because those five houses are part of the problem and Partners had 20 years to do something about them, but didn't. Others said the project is just too overwhelming for the existing Pratt Street, even with the company's proposal to "step down" the building heights, from 14 stories along the train tracks on the Cambridge Street side to 4 stories on Pratt.

"It really violates the character of the street," Eva Webster said.

Other residents worried about the influx of all those pedestrians pouring onto the narrow Linden Street before and after work.

And, as always, traffic was a key concern.

Partners proposed 203 garage parking spaces - one for each condo and 150 for the 300 apartments far less than what city zoning for the lot would call for. BAIA Vice President Anabela Gomes agreed the trend is towards providing less parking than required in zoning - especially in areas with a lot of public transit - but said the 0.5 ratio for apartments is just too low.

Other residents said Linden Street is already one of the most congested streets at rush hour in all of Allston and said all the cars coming out of the project's garage on Linden Street, a one-way street that ends at Cambridge Street, would only make things worse.

If Partners goes ahead with the proposal, it would file detailed plans with the BPDA, which would trigger public meetings. The project as proposed would also require approval by the zoning board.

This plan can't be any good - the artist rendering doesn't have any birds!

That's actually an intentional part of the plan. You see those big glass walls of the neighborhood shop? That's to take out any birds that snuck into the buildings airspace.

Early in the process

They probably just ran out of time before the meeting to pick up some birds to embed in their renderings.

Linden is already used to

Linden is already used to bypass for Harvard Ave to get to Cambridge/the pike. Not sure it can handle additional local traffic. Maybe if they switch the one-way direction or make it a dead end at Pratt. In any case it will put additional pressure on the already congested Harvard Ave intersections.

We need the housing

The answer to a housing shortage is not to prevent significant new residential development. The answer is to build housing while improving public transit. (Yes, I know, the T is terrible and all, but there are new trains and signaling in the works, and the better buses campaign is just getting started.)

Not Enough Parking but also Too Much Driving?

How people can argue for more parking while simultaneously claiming that the area is already too congested is beyond me. The more parking that gets built, the more people who will be driving to and from the building. Less parking = fewer cars.

I think you are missing the point silly. There should be no new building there at all, which won't affect them because they have lived there for ever anyway. And, who knows, maybe all this expensive housing will make all the new people actually move away and things can go back to the way they should be (i.e. were).

That said, this is a pretty large project for that street and the developers probably need to go back and take another stab to make it more palatable.

It should be noted that Linden is only one-way from Pratt to Cambridge Street (and on the single long block between Comm. Ave. and Brighton Ave.) It's two-way between Pratt Street and Brighton Ave., and users of the 20 Linden parking lot often ignore the fact that they're not supposed to turn left when exiting that lot.

As many have noted, traffic on Linden headed towards Cambridge Street is already pretty heavy. It's also extremely pedestrian-unfriendly. I've been trying to get the badly faded crosswalk at Linden and Cambridge repainted since May 2017, with no success. There are no crosswalks at any of the side streets (Linden, Farrington, Ashford, or Gardner,) and drivers along Linden pretty much ignore pedestrians trying to cross at those corners.

Who would ignore a citizen's request to have a crosswalk painted for an entire year and a half?

People use Linden to get to

People use Linden to get to the Pike and they wait forever to make that left onto Highgate St.(then zigzag over to Comm. Ave. or Brighton Ave.) if they're going the other way.

And what about the drunk

And what about the drunk drivers who leave this club that would be torn down? Like the one I had to be on a jury for last year who was arrested after leaving this club and crashing on storrow drive? Why doesn't anyone think about them?!?

There's this weird notion that building housing close into the city will increase traffic, but building further out won't.

If you don't build 353 units here, but instead build it out west on the pike, those same people will still go down Linden, but will continue to turn onto Cambridge and get onto the pike, increasing traffic there as well. In fact, they would produce more traffic as more of those living in the 353 units in Allston will use public transit and less will drive than if those units were located out in the suburbs.

That's only assuming something gets built somewhere else.

back in the 90s there was an old lady at the end of linden, near cambridge street, that would sell single bud 12 oz Buds for a buck a can after hours . the beer was warm but that didnt matter at 3am on a sunday morning. we had a special name for it but i wont use it here so i dont offend anyone. anyone else remember it?

Only thing I ever heard it called

Was the after hours liquor store, and it persisted at least into the late 2000s.

A shame that Eric Garner was not an old lady. Maybe that would have saved his life.

To come up with a full NIMBY BINGO board.

- It's too weird-looking and

- Noise.
- Why don't they build family-sized apartments?
- This many apartments will overwhelm the schools
- I've lived here for ___ years
- I'm a native Bostonian
- It's hard enough to park when it snows already
- This doesn't fit with the neighborhood character
- Why can't they just build more brownstones/triple deckers/etc.?
- It's going to cast a shadow on my tomato plants

I remember that one from the apartment building they put up next to the Roslindale commuter rail station where the gas station was.

Some non NIMBYs apparently think so much should get built that some plants can't grow. Really non a good way to create a neighborhood.

Some non NIMBYs apparently think so much should get built that some plants can't grow. Really non a good way to create a neighborhood.

ask and ye shall receive

joe p is my hero

joe p - you are the king - best comment in years

Plenty of those things are

Plenty of those things are actually true, they don't become untrue just because you type a snarky post, and you think every neighborhood should be affordable to everyone before they leave the city when they get older anyway.

It's true that parking, congestion, gentrification, and open space are all affected by more construction. Sometimes the development makes sense, sometimes not.

Often the people that complain the most are the ones who are just going to leave anyway.

Marking off the square ...

That's not an actual quote in

That's not an actual quote in the comment you are replying to. All it said, was that what he calls NIMBYism are regular topics people care about.

Somebody is whining that they might have to share all the things that they don't pay for!

Someone is whining because

Someone is whining because they think that people who don't live somewhere should have more say than people who do. People do pay for things through property taxes, and there are expenses related to congestion.

If they live there and pay

If they live there and pay taxes, they do pay for them.

- This will bring in more

- This will bring in more "transients," who have already ruined the neighborhood
- Too many studio apartments, which don't appeal to families and will appeal to students (as opposed to 3 bedroom apartments which families cannot afford and are usually occupied by 3 unrelated individuals, i.e. "transients!")

Non NIMBY talking points are often some variation of complaining about locals while feeling entitled to just move somewhere.

So much for keep Allston

So much for keep Allston shitty. Let's see... no real trees because the lollipop ones in the rendering die after a few months anyways, no daycare, no affordable housing for working class people. Luxury, luxury, luxury! May as well put in a pot shop in at ground level for the trust fund kids while we're at it. Like dude, where's my bong?

How many day care centers were there in the houses being knocked down that need to be replaced?

There are both child and elderly daycare centers in the business block on Linden.

Any building of this size will have affordable housing due to the city's requirements...

If they actually build 353 units (as opposed to using that number as an inflated starting point that they know they'll drop to the lower number they really want to show how "reasonable" they are in dealing with the neighbors), they'd have to provide at least 46 affordable units.

So close to a bingo

The comments write themselves

The comments write themselves. No need for parody.