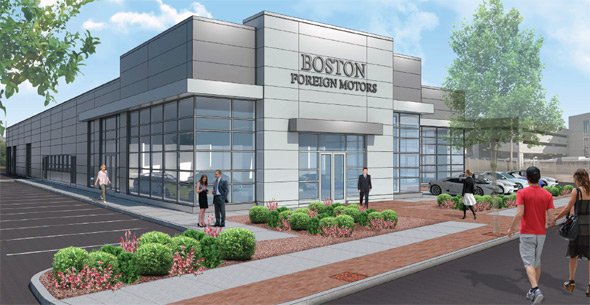 Waldo Bros., which has sold building supplies since 1914 on Southampton Street, will be replaced by a car dealership specializing in used luxury cars according to plans filed with the BRA.

Boston Foreign Motor says it will revamp the larger of the two buildings on the site at 202 Southampton St. for use as a showroom and a 21-bay service garage. A smaller building will be knocked down for a 166-space parking lot and landscaping, under the $4.5-million plans.

Boston Foreign Motor owner Milad Farahani and his family have operated car dealerships in the Boston area for more than 30 years, currently at Cambridge Street in Allston. Farahani began working in the family business 15 years ago, when he was just 16.

The Project's urban design goal is to significantly enhance this Newmarket/Southampton Street mixedused corridor by creating a commercially friendly and inviting environment and providing a new commercial storefront, parking, and associated outdoor space. The design concept aims to enhance the Site with a structure that is in scale with the mixed-use development found on Southampton Street and to be consistent with the character of the neighborhood, while improving the quality of the design and construction on the site. The Project aims to create an architectural element that marks the location with a new retail space and highlights the introduction of new construction co-existing with the urban fabric of the larger block.

Hopefully they have late night hours to sell to

the Ricky Bobby crowd racing the meatpacker 500 every weekend.

How convenient for the scum

How convenient for the scum who drag race in that neighborhood every weekend. They can speed their cars right off the lot!

Its hilarious to read them bullshit their way through describing how knocking down a building to put in a ridiculously big parking lot is fitting in with the "urban fabric". Because nothing says urban like a huge suburban style parking lot.

Have you been down there?

The whole area is filled with parking lots. Newmarket Square is an industrial area. It's a different kind of urban than the multimillion-dollar condos in Boston Proper, but it's still urban. Gritty, even.

It will be right next to the T Bus Depot - which means they'll either have their own car washing set up or head down to the one near the Mass Ave Connector. If they set up a deal with Bubbles they can say they're keeping things local. (?)

All they have to do is drive

All they have to do is drive down to the intersection of Mass Ave and Melnea Cass to get the windshields washed. Moore Street will make a nice drag strip for test drives, too

2 fast 2 furious. U can't handle my skids ah haha. Holla all the shot racers in da house put up ya collas. Aiyt aiyt. Word to my home brothas n

If you can't hand me at my

If you can't hand me at my fastest, you don't deserve me at my furiousest

Wish they would open a

Wish they would open a burrito place there instead. I'm kind of hungry!

shopping center -- the South Bay Town Center -- get approved? Remember, this one?

If so, this feels like it's of a piece with that.

That's where the Wahlburgers is going.

I been to a Wahlburgers. Those are some, uh,

some, um, some solid burgers. Solid. Absolutely solid. Okay, sure, kinda steep for a fancy fast-food burger, but I thought maybe I could've seen Marky Mark. Or at least maybe one of The Funky Bunch: Mark's probably pretty busy, hanging with Turtle or whatnot. But that one over by Fenway has a sweet patio, brar. It's got the outdoor heaters and everything.

In Roslindale there was a building supply company called Whittimore Co. which stood on the land now occupied by the Dale Village Condos, specifically at the intersection of Harrison and Marion and extending back to the Fawndale Apts and the railroad.

When Whittimore sold, it was sold to Waldo Bros. Waldo continued the operation in Roslindale for many years more then closed that location and consolidated where they are now on Southampton St. The Roslindale building became abandoned, had a few fires (one rather large) and the structure was eventually leveled and the land cleared. The land became overgrown for the next 25 years.

Then, when the land was slated to be re-occupied by industrial users again (was still zoned for industry) then City Councilor Tom Menino came in and got it re-zoned residential.

The Dale Village Condo complex followed immediately in the mid-1980s. It was a major revitalization of the area and included new electrical lines and new water mains to handle the demand of over 200 units that Dale Village would have.

The part of Dale Village on Marion St was at one time the home to the Boston Ice House which of course, made ice. The Florence St section between Marion and the Bridge was the original home of the Cunningham Coal Co. which sold coal to local coal-burning homes. Coal was delivered there by rail, was sorted, crushed to size, and delivered. The old wooden coal storage and sorting building burned in 1962. It was a rather spectacular event that lasted several days.

When the Paradigm an Blakemore apartment building next to the bridge started construction (across from Budget Mart) , they ran into the granite slab foundation of the old coal company office building. The slab itself was the foundation of the original train station house that served the area until the 1940s when it was demolished. Trains continued to stop there till the late 1970s. My last departure from a train there was in 1978 during the infamous blizzard bearing the same date and name.

According to Waldo's web site they have another location in CT.

Many a sonotube bought there...

All the contractor supply places I used to drive around to are going. Don't know how long Karp's will hang around and Marr scaffolding is getting squeezed. Where the hell do they go, Quincy? All this construction is going to need supplies from somewhere....

This must mean the "methadone

This must mean the "methadone mile" will no longer exists. Can you imagine someone going to by a "luxury car" over there. The strange thing is that i can but it would be more like some skit from the dave chapelle show. Tyrone Biggums meets Donald Trump type scenario.

Driving tip: Never leave a lit candle in one of your car's cup holders
Mass and Cass cleared of tents tonight, but people still congregating there
More than half of Mass/Cass tenters moved into new housing; rest to be moved by Wednesday, Wu says
Fire at new Mass and Cass encampment destroys several tents
French restaurant in the South End closing
Citizen complaint of the day: East Boston grows weary of airplane complaints from the South End