The iconic statue that almost wasn't 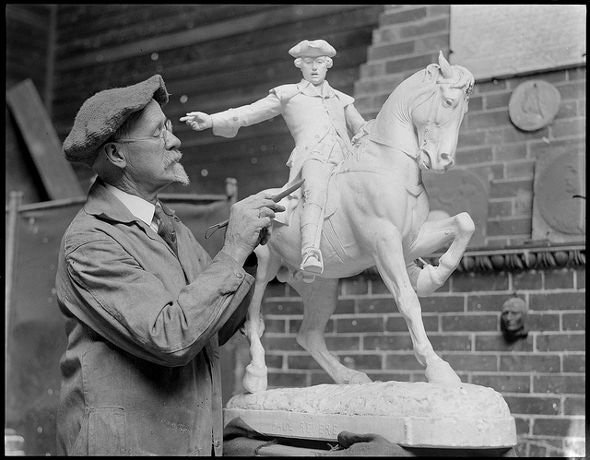 Dallin in his later years with a model of his statue. From the BPL's Art and Artifacts photo collection.

It'd be hard to imagine the space between Hanover Street and Old North Church without Paul Revere warning the colonists the Redcoats were coming, right?

And yet, it almost wasn't there at all.

In 1885, a Boston design committee picked a young Utah sculptor named Cyrus Dallin to commemorate Revere and his famous ride. The city agreed to kick in $5,000 and the committee vowed to raise the rest of the money in donations to erect the statue - with Copley Square initially being the leading contender since, as the Globe noted at the time, that's the part of town where most of the money would be coming from:

Since it is they who will contribute to the erection of the statue, that at least they should have something to say in the selection of a site, and no place, they claim, could be more suitable than Copley square

But then nothing much happened. For 55 years. Dallin, at first fairly unknown - among the people he beat out for the Revere commission was Daniel Chester French - eventually became famous for his work, which includes the praying Indian (OK, Appeal to the Great Spirit) outside the MFA. He moved to Arlington and taught at the Massachusetts Normal Arts School (today's MassArt).

It turns out, the Globe reported (but not until 1935) that a well known local sculptor, who hadn't even entered the competition, turned his nose up at the young upstart from out West and convinced members of the original fundraising committee to just not raise any funds rather than contribute to this "height of impudence."

Dallin, though, outlived the committee, and the sculptor, helped by a campaign led by Globe art critic A.J. Philpott, lived to see his statue dedicated - in the North End - on Sept. 22, 1940.

That outfit reminds me of the

That outfit reminds me of the time the Stooges went to Art School. Shades of Larry Fine.

So the identity of the blackballing local sculptor....

... Moroni, which graces pretty much every Mormon temple around.

He was born in Utah in the 1800s, it seems, and some people flipped their lids in Arlington when the Dallin Museum had the angel created for the Belmont Temple on display.

Because, you know, a work of Cyrus Dallin shouldn't be in the Dallin museum if it means people find out he was born into a Mormon family ... or something like that ... right.

So *that's* what that tiny

So *that's* what that tiny museum in the historic house in Arlington Center is.