State Police report the four were members of Troop E, which patrolled the turnpike.

The Supreme Judicial Court today dismissed the OUI case against a man who rolled his car over on a Rte. 3 ramp in Braintree in 2014 because State Police didn't issue him a citation until nine days later - a violation of a state law intended to fight ticket fixing. Read more.

WCVB reports the three troopers - two now retired - were assigned to Troop E on the turnpike, which State Police disbanded after the station reported on potential overtime abuse there. More to come after an 11 a.m. press conference by the US Attorney's office.

As it has done in years past, the Boston City Council voted today to formally ask the state Legislature to let Boston Police patrol the South Boston Waterfront. Although Boston officers respond there in emergencies, legally, State Police have jurisdiction. Read more.

State Police report 19 troopers from Troop E - who patrol the Massachusetts Turnpike - face hearings on whether they put in for overtime shifts they didn't work. Read more.

The Globe reports the trooper who arrested that Randolph guy the other night - and yes, of course, there's now a question as to whether he was shot or got injured some other way - has a long history of spewing racial and other epithets on a police-oriented online forum. The Globe gives a taste of the comments by "Big Irish," many of which they don't quote verbatim because the Globe is still a family newspaper, but one of which he concludes:

Fuck the people of Mission Hill and Roxbury!! They don't give a rats ass about us!!

State Police report somebody rigged up a system this afternoon to make hoax calls across the region that appeared to be coming from their South Boston barracks: Read more.

State Police get a drone

They say they'll use it to help investigate major motor-vehicle crashes.

State Police: Cabbie plows into cruiser in the Back Bay, then drives off

There were no injuries, State Police say.

State Police say they found the guy who stole a cruiser - as he walked down the turnpike, ripping up a Bible

WBZ reports on the arrest this morning in Newton of the suspect in yesterday's State Police cruiser heist in South Boston.

WCVB reports a State Police cruiser stolen from a state lot on D Street South Boston this morning showed up, abandoned, around 12:45 p.m. at Twin City Plaza in Somerville.

On the Arlington List, a Facebook group for residents of that town, one resident reported an odd occurrence around noon: Read more.

What's left of the State Police cruiser from that Expressway crash 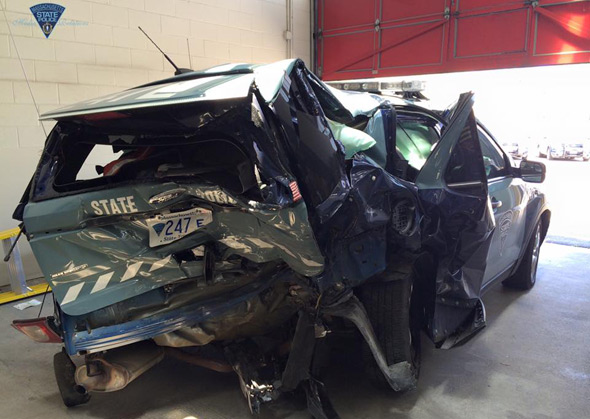 State Police released photos of the patrol car a trooper was in on I-93 south early Saturday when, police say, another car plowed into it - along with a statement by State Police Col. Richard McKeon: Read more.

Boston City Council speaks as one: It's time for BPD to patrol the streets of the Seaport

The City Council voted unanimously today to support this year's version of legislation that would give Boston Police joint jurisdiction over the streets of the South Boston waterfront, now legally under the purview of State Police. Read more.

The City Council approved a measure by at-large Councilor Steve Murphy to hold a hearing on a proposed state law that would let Boston police officers respond to calls in what has become one of Boston's fastest growing neighborhoods. H.2107, sponsored by state Rep. Nick Collins (D-South Boston), would give Boston Police joint jurisdiction in the area. Read more.

On Tuesday, the State Police placed the trooper depicted in the video on restricted duty pending completion of a department investigation. The name of the trooper is not being released while the internal investigation is underway.

The Massachusetts State Police will conduct a tactical response drill this Saturday, Nov. 29, at the State House in Boston, from the hours of 7 a.m. to 3 p.m. Any passersby who observe a large volume of troopers and police vehicles around the State House and on Beacon Street should be advised that this activity is a training drill and there is no reason for alarm. The drill is not open to the media or public.

State Police report troopers patrolling the lower level of Terminal C around 1 p.m. were approached by concerned citizens who'd just spotted a man drive up to a curbside trash can, put two containers in it and then drive away.

State Police Troopers and [bomb squad] technicians immediately responded, recovered two small containers from a trash can and secured and removed them from the area. The State Police continue to investigate the incident, but after speaking with the suspect do not believe there was any malicious or criminal intent, or that there was ever any threat to public safety.

The best policed blocks in Boston?

Yesterday morning, I drove down to the Renaissance Boston Waterfront Hotel on Congress Street (I was on a panel discussion).