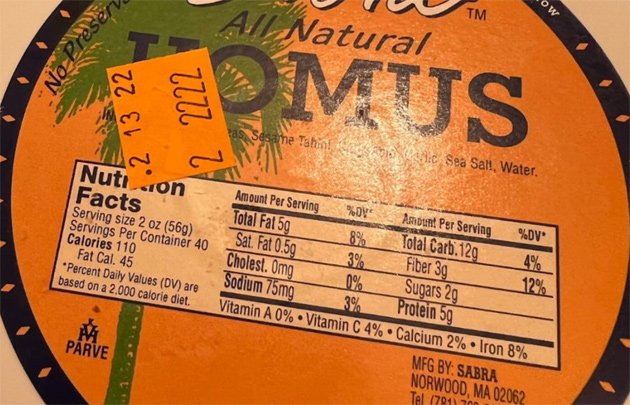 KVH symbol on lower left of Sabra hummus, or homus, tub. From the KVH complaint

The Rabbinical Council of Massachusetts, which provides certification of kosher foods under the name KVH Kosher, today filed a trademark lawsuit against Sabra Foods of Norwood, which the council says continues to stamp its hummus with the council's "kashruth" symbol even after being told to knock it off.

The company is not the same as Sabra Dipping Co., of South Chesterfield, VA., which also sells hummus called Sabra.

In its lawsuit, filed in US District Court in Boston, the council says it stopped certifying Sabra Foods hummus as kosher in 2016 "because of Sabra's persistent inability to comply with the terms and conditions of their license, for non-payment of fees, for adding new ingredients without informing KVH, and for failing to take corrective actions in a timely manner as required by KVH."

And yet, the group says, Sabra continues to use the council's mark on its packaging for at least one of its hummus offerings, which might fool unsuspecting consumers into thinking the chickpea-based food has been certified kosher - in a process in which a trained inspector has to ensure that not only are all the things that go into the hummus kosher but that the equipment used to make and package it is free from any non-kosher contamination.

The group adds it's not just observant Jews being fooled:

Many Seventh-day Adventists, vegetarians, vegans, those who are lactose-intolerant, and health conscious consumers consumer kosher foods due to the higher standard of quality and stringent ingredient control under which they are produced and manufactured.

The council asks a judge to order Sabra to knock it off, destroy any packaging with its kosher symbol on it and pay enough damages to make it think twice about trying to pass their stuff off as kosher again.

You don't have to be a rabbi

You don't have to be a rabbi to be a kosher supervisor.

That's like stolen valor.
But really, lacking integrity and misleading claims on labels are customer no-nos.
You couldn't get a rabbi to certify? Is this a job opportunity? Can't the rabbi hold additional job responsibilities In the office or production when not inspecting the line and ingredient storage?

Why not claim you have the same recipe preferred by 10 of 12 od Jesus' Disciples or Mohammed's Fave or something that can't be proven? Crusaders' Choice: Balsamic & Garlic

That kind of bull hockey lets you stand more securely in your brand identity than this!

"HOMUS" is awfully close to an LGBTQ plural AND they spell it with two ems in their product pulldown menu. Which is it?!

The person who makes sure

The person who makes sure things are kosher (mashgiach) does not have to be rabbi. From chabad.org:

"However, not every mashgiach is a rabbi, and not every rabbi is qualified to be a mashgiach."

On a Friday, no less

Adam, the complaint link just goes to the picture.

When I click on the link to read the complaint, I see a photo of the lid for the hummus container.

Locally owned company (Haverhill) and it is really, really good.

Sabra says Norwood on it but Sabra is headquartered 5,000 miles away and is a company with revenue of $5.6B. Haverhill is 25 minutes up I-93 and the profits stay local.

I'd agree, but some people care WHICH Hechsher is on things. (Cedars is OU).

Please help me out here.

A hescher is a kosher marking

A hescher is a kosher marking. Essentially it's a certification mark; that the particular organization that uses that mark has checked (and continues to check) that the product is kosher, based on its ingredients, how it was prepared, lack of contamination by non kosher substances, etc. (This is a modern practice due to the rise of prepackaged foods; when you lived in a village and knew the butcher, baker, dairyman, and farmers personally, it wasn't necessary)

There are a number of different organizations that do this, and some of them may be regarded to be laxer than others, which is bad if you, the consumer, have very high standards.

And technically anyone can claim their food is kosher without needing to be certified; the question is simply how convincing they are.

Anyway, one such organization is the Orthodox Union (OU) which uses as its hescher a U in a circle. As I recall it is the biggest of the certification groups so you likely have some packaged food bearing their mark. But there have been some scandals over the years and so their reputation isn't sterling. Some people might refuse to buy OU marked foods on the grounds that they can't be sure it really is kosher as the OU is claiming.

And concepts that would be understood by anyone needing such advice.

Buying locally certified? KVH and their employees are a local business, OU is international :-)

Not that Sabra, the local Sabra

In fact the offending company is Norwood based Sabra Foods, look closely at the picture of the packaging and you can see.

The Norwood Sabra even has a disclaimer on their website that they are not the international corporation.

Some links to help clarify

I had no idea there were two companies!!

I have shied away from Sabra hummus because some of it seemed so industrial and yucky, but was confused because I remember yummy small-batch tasting Sabra hummus. This explains my confusion!

I’m sorry the small local company hasn’t followed the rules for its Kosher certification and hope they figure it out without going bankrupt.

So many lawsuits these days about copyrights, when the justification is that it might confuse the consumer.

And here are some very confused consumers, but...

Added an explanation of that to the story. Another way to tell the difference: The national brand sells "hummus," while the local company sells "homus."

Sounds like a scam. Sabra probably made a minor change to the recipe and the kosher mafia said "You have to recertify. Pay us money." and Sabra was like "We already paid you money." and they were like "That was before. Pay us today."

I'm more inclined to think a company that cleverly "shares" a name with a giant national brand is also being accused of other using symbols and trademarks that they shouldn't.

But you keep going with that jewish mafia theory, it's a great look on you.

It's either that, or "Big Kosher". Still a racket.

I think you're out of your

I think you're out of your league on this thread.

The certification is, to my understanding, that these ingredients from these sources using this process on these machines is, according to this interpretation, kosher and couched as such by the listed authority. Not all that plus bacon but not vouched for in spite of their mark on it.

The company doesn't actually have to get certification...

Someone please do a quick Venn Diagram

Rosh HaShana is only 2 weeks away, and everyone is starting to shop now.

I had no idea that there was a local Sabra company

unrelated to the national brand, and selling some of the same products. How does this not cause a trademark lawsuit?

I know people with food allergies who look for hechshers (kosher certifications) because they can be assured, for example, that if it's kosher there's no shellfish or shellfish extracts in it, and if it says parve (like the one in the picture) that means there's no dairy in it. If Sabra is adding ingredients without notifying the authority that provides the hechsher, it is dangerous for those consumers.