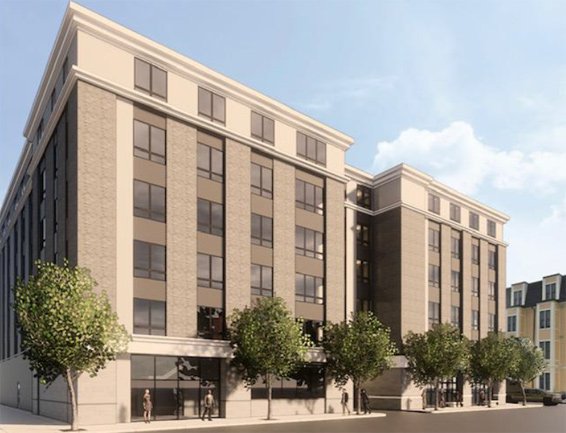 Rendering by Arthur Choo and Co.

A developer has filed plans with the BPDA to replace an old auto-repair place at 34 B St., at West 5th St., with a six-story, $13-million building with 54 "compact" apartments aimed at young professionals and families who are willing to give up some room to live near the Broadway T stop.

Joe Hassell, of Boston Real Estate Capital downtown, has filed under the city's "compact living" pilot, under which developers can build units smaller than normally allowed, with less parking provided - in this case none - on the theory they'll charge less, making the apartments somewhat more affordable.

Nine of the units would be marketed specifically as affordable.

The proposal includes nearly 4,000 square feet of "shared" interior space. The plans do not specify what this space, required under the pilot rules - would be used for - as well as a 2,200-square-foot roof deck/garden.

The pilot rules also let developers reduce the amount of parking they provide - especially for buildings near subway or train stops. Hassell says the building would be a third of a mile from the Broadway T stop. However, his application adds that because the project will include elimination of what is now a 40-foot-long curb cut, the city will gain some additional on-street parking.

The proposal also calls for 54 spaces for bicycles for residents and another 12 for visitors - as well as a shower and changing room next to the bike-storage area.

34 B Street filings and calendar.

I'm all for it as long as there's a roof deck, bike parking, and a keg cooler in the 4x8 common area.

800sqft two bedroom unit can be quite spacious as long as the layout is efficient and space isn't wasted on an oversized bathroom or mostly nonfunctional pretend walk-in closets like you see in current "luxury" 1000sqft units with 10x10 bedrooms.

This. A huge portion of the

This. A huge portion of the two-bedroom brownstone units in the South End are smaller than 800 SF, and have been since they were built over a century ago. Doesn't stop anybody from wanting to live there.

That's a pretty typical two bedroom in a two-family or triple decker.

Much bigger than your typical 1960s house trailer, too.

Spare us your anti-urban nonsense, please.

I get why you want a shower and changing room next to bike parking in an office building but why would you want it in a residential building?

Employees can use shower/changing room

I just looked at plan. It says shower/changing room for residents and employees. My building has a shower room for employees near the maintenance office. This is a nice convenience for them and also perhaps a health/sanitation benefit. Could provide on-site, immediate relief for accidental exposure to chemicals or sewage?

If they reduce the parking

There are *very* few buildings permitted in Boston these days with a lower parking ratio than the average vehicle ownership rate in their respective neighborhoods. Most buildings actually have the opposite problem: Many unused parking spaces. The MAPC actually did a study showing that on average HALF of all newly built parking spaces are never occupied.

Anyway, I would love to hear how you went about determining which cars on your street belonged to the occupants of new buildings. And once you're done explaining that you could also tell us why you think that residents of new construction are somehow less deserving of the (free, city-provided, public) on street parking than you are.

So what if they reduce the parking

Are you implying that every other residence in the adjacent blocks has parking and none of those tenants park on the (PUBLIC) street?

Do you also support denying anyone who moves into the D Street projects across the street after this building is complete a resident sticker since they are close to the T too?

Fair is fair. If you don't agree, you are a hypocrite.

Can you get a city resident sticker if you live

in the D St projects? It seems like there is a whole other parking permit system in there, I know you can't park with a South Boston resident sticker.

How much will their property taxes be rebated for not claiming that parking that other taxpayers get as of right?

This is probably a huge can of worms - Winchester got shitsmacked for trying to not collect trash from apartments and condos because those buildings were property taxed the same as others.

How about putting some color on this building which looks very drab in this rendering. Boring design. Come on! It doesn’t take much to design something attractive.

park on the curb cut now so the net gain in on street parking is zero.
Developers will tell you the earth is flat.

Court upholds Cadillac Frank Salemme's conviction for killing the owner of the Channel; he will now die in prison
It was tool time on the T, at least until the police got to Andrew
Body in a movie trailer
Ferry service between East Boston and Seaport to start next week
It's not easy finding a place for a scrap-metal business in Boston these days
The South Boston hill that helped seal a glorious Revolutionary triumph is named for a glorious failure