South End now has highest rate of Covid-19 infection in Boston; could be linked to higher testing rates at neighborhood homeless shelters 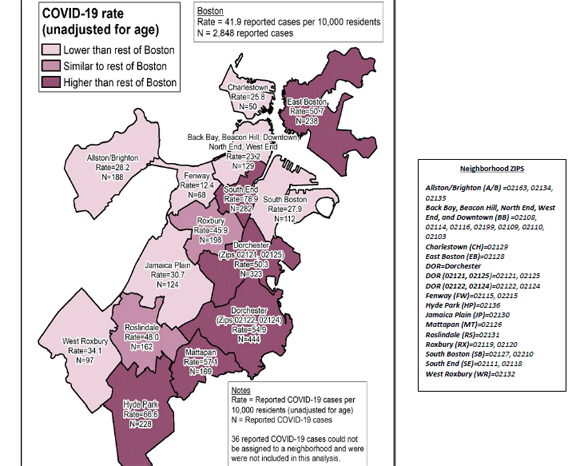 Boston Public Health Commission figures released tonight show the South End now has the highest rate of Covid-19 infection among city neighborhoods - its 282 confirmed cases as of Thursday give it a rate of 78.9 cases per 10,000 people, compared to a rate of 66.6 in the neighborhood with the next highest rate, Hyde Park.
44 d
The commission does not provide any possible explanations for the high numbers in the South End, which reflect a fourfold increase over its numbers last week. However, earlier this week, city officials said they had conducted "universal" testing at some city homeless shelters, two of the largest of which, the Pine Street Inn and Rosie's Place, are both in the South End, so it is possible the high rate reflects increased testing in 02118, or that the numbers reflect a particular outbreak of Covid-19 among the city's homeless population, or both.

A task force appointed by Mayor Walsh will focus on a higher rate of infection among black residents than in other groups, as well as higher-than-average rates in Hyde Park, Mattapan and part of Dorchester.

Total number of cases citywide by week and number of visits to emergency rooms for coronavirus-like illnesses:

No clear picture yet

The point about the shelter testing sounds plausible.
But in general it seems like it's too soon to draw conclusions. If impact was strictly tracking socioeconomic status, Roxbury would be worse off and 02122 would not be getting whacked like it is. If it was heavily influenced by language and cultural barriers, you'd see worse numbers for Latinos and Asians.
It seems likely that existing disparities in things like asthma, diabetes, and heart disease will drive more severe cases among African-Americans.
But as of now, the city says it only has racial data on about half the cases. We just don't have the full picture yet.
They've done a lot of outreach through community networks and health centers and now Walsh is putting together a group to give the issue more scrutiny.
I hope they stay on top of it so we don't see the kind of disparities happening in some cities.

Zip code 02111 (Chinatown) is being lumped into the South End without attribution for COVID-19 reporting. I'm not sure why, but given the perception that SE is now a mostly white/wealthy downtown neighborhood with some Section 8 housing, adding Chinatown without attribution while placing the 02116 part of the SE into Back Bay (Dartmouth St. to Tremont St. to Berkeley St. to Columbus Ave, mostly free market housing with limited Section 8 housing) may mask/obfuscate a high infection rate of lower income Boston residents of color in the part of the city officially designated as South End for COVID-19 reporting purposes.

Many South End residents are

Many South End residents are also employees at BMC which has close to 200 staff positive. Not surprising given taking care of pts from neighborhoods that were most affected at last count.

Contrary to popular perception, as of the fairly recent past, about half or maybe a little more of the South End is subsidised housing according to a map that I once saw at a neighborhood meeting. These include Villa Victoria, Cathedral Housing, Susan Bailiss, elderly housing on Blackstone Square, Castle Square and other smaller developments and townhouses. Add in Pine Street Inn buildings, Rosies Place and the shelter next to BMC, and it is clearly not a small proportion of the neighborhood.
Many people do not realize this.

If I remember correctly, zip code 02122 includes the Port Norfolk section of Dorchester, which is home to a large number of police officers. That could help explain the large number of cases in a middle-class area.

The Fenway will continually have the lowest per capita infection rate in the city.

I don’t see how we can put

I don’t see how we can put any faith in any of the stats about infection rates, given that hospitals and doctors are routinely telling patients who call them reporting symptoms not to come in and not to get tested. My wife and I are 2 such patients. I doubt we show up in any stats but we both clearly have it. I suspect the actual number of cases is probably an order of magnitude higher than what’s reported in the stats. The reality is we have no clue just how widespread COVID really is.

THIS guy gets it

People are so data driven now in their dailys lives that they're using these models as gospel.
Except that without across the board testing on a significant scale in EVERY neighborbood, we have no way of knowing exactly where it is.

That data will come during the post-mortem stage of this plague but for now we need to assume it's EVERYWHERE.

Because if we don't, then ya know some asymptomatic fitness junkies will see low numbers in their area, go for a 10 mile run and breathe, spit, and sweat all over the city.

Wind pipe so dry it hurts to breathe.
That must hurt.

The rich and shameless

Can flee to the islands of Martha's Vineyard and Nantucket by ferry and yachts to escape the virus but the homeless and poor cannot seek refuge on the Island of Long Island. Has anyone even looked at the feasibility of using Long Island as an alternative to the convention center?

These numbers are meaningless

It isnt voting patterns it's a virus, unless every woman man and child is tested in Boston the numbers are just an interesting yet useless bit of info.

Driving through Upham's Corner the other day - City officials reprogrammed the digital message information board that's been parked next to the burying ground for nearly a month.
No longer is the neighborhood fighting the CARONA virus - apparently that curve got flattened and they're now fighting something called CORONA virus.

These divisions make absolutely no sense. For instance, why is Fenway a discrete division yet Back Bay, Beacon Hill, North End, West End and Downtown (whatever the hell that means!) all get lumped together? Why is Fenway as a neighborhood its own tidy little designation?

Skeptical without universal testing for every resident

Until there is a simple Covid-19 test with quick and accurate results, one which every Boston resident can take, these neighborhood percentages don’t mean a whole lot because they are based on very limited and incomplete data. We don’t know who already has it, and according to news stories, a quarter of those who have it can be asymptomatic.

Please everyone, wear a mask every time you go out. I grocery shop for my family, my elderly mother-in-law and an elderly neighbor. About half the people shopping in the supermarket are wearing masks, half aren’t. On my walk to the supermarket, it’s the same thing. Let’s get that percentage up to 100%, that is one thing fully in our control. And stores could enforce it by having an employee at the door turn away those who aren’t wearing a mask.

Mayor Walsh and Governor Baker, tell everyone in MA to comply so that they aren’t inadvertently spreading the virus further. Stay safe, everyone.