The Supreme Judicial Court ruled today that Gov. Baker has the power to order businesses shut and to limit the size of gatherings during a public-health emergency, such as the current Covid-19 pandemic.

The ruling by the state's highest court comes in a suit brought by health clubs and tanning salons, including the Bare Bottom Tanning Salon, several churches, a conference center and an Italian restaurant in the North End - Antico Forno.

The court started by saying that the state civil-defense law, enacted in 1950 to deal with the aftermath of nuclear attacks and large natural disasters, does, in fact, let the governor issue public-health restrictions.

Although the 1950 law does not specifically mention pandemics as a reason to let the governor sign emergency orders, it does refer to "other natural causes" in its list of disasters.

"We note first that COVID-19 is naturally caused, as scientists believe it originated from an animal, likely a bat," the court begins, continuing that the phrase therefore "encompasses a pandemic on the scale of the COVID-19 pandemic."

Given that COVID-19is a pandemic that has killed over a million people worldwide, it spreads from person to person, effective vaccines have not yet been distributed, there is no known cure, and a rise in cases threatens to overrun the Commonwealth's hospital system, it is a natural cause for which action is needed to "protect the public peace, health, security and safety, and to preserve the lives and property of the people of the commonwealth."

The court, which noted that after issuing his orders, Baker issued followup orders easing the restrictions as the epidemic waned over the summer, also held that a public-health emergency involving a highly contagious disease lets a governor set restrictions on such things as the number of people who can congregate in a restaurant or church. It cited a 1905 Supreme Court case in which the Supreme Court upheld a fine levied against a Cambridge minister who refused a smallpox vaccination for himself and his son in the midst of a smallpox epidemic.

It added that this past May, the Supreme Court again upheld that 1905 decision, in a case in which a church sued California over that state's attendance limits, in which Chief Justice John Roberts wrote:

The Constitution principally entrusts '[t]he safety and health of the people' to the politically accountable officials of the States 'to guard and protect.'

The court also rejected the argument that Baker's orders cross over into the authority of the legislature, that his orders are valid executive actions aimed at carrying out the will of the legislature, generally in the case of the Civil Defense Act and more specifically about Covid-19. The court noted the orders didn't stop the legislature from passing several Covid-19 laws, including a moratorium on foreclosure and a law allowing for the expansion of take-out and delivery options by restaurants.

Can't wait for the testing of this rule at that Wicked Patriotic Trump worshiping church in Worcester. WPD should use water cannons this time to enforce the rule limiting gatherings.

Church outbreaks have been well documented to have caused a huge spread in Maine and one church over the border in New Lebanon NY caused the early outbreak in Pittsfield.

Get into that one on one thing with Buddha / Allah / Yahweh / Frank / FSM / Jesus entity relationship Sky God worshipers for a few more weeks. I don't want more to die because of your belief system. Thanks.

I must disagree with the SJC

"We note first that COVID-19 is naturally caused, as scientists believe it originated from an animal, likely a bat,"

No. Here's the truth of its origination: 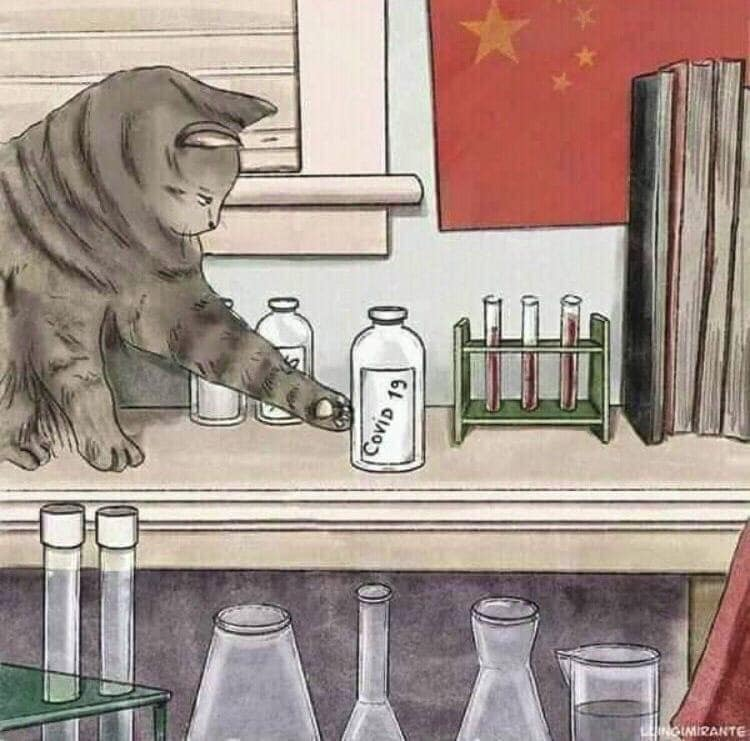 Let's not associate cute cats with your xenophobic conspiracy theories, thanks.

Let's not associate your name with mediocre bus companies that have since closed down.

Pee Wee Herman could do better than that.

But at least, "but this content is not "dumb, bigoted and dishonest".".

I understand why it's problematic showing anything that involves nuance to a nation of idiots, but this content is not "dumb, bigoted and dishonest".

The thing about jokes, if you

The thing about jokes, if you have to explain it...

Plenty of “jokes” are dumb, bigoted, and dishonest.

Furthermore, it’s super easy to say/post bigoted stuff and then fall back to the disingenuous “I was just joking” excuse. It’s a win-win; the poster gets to propagate their bigoted views and gets the “it’s a joke” get-out-of-jail-free card.

Well, allow me to retort.

I'm not going to hide behind shit.

China's theft of intellectual property and suppression of Uighurs should be of concern to any decent human being. Their treatment of the people of Hong Kong should be renounced. Their disgraceful treatment of Tibet has been on record for years. But, CNN waits until after the election to reluctantly report that the supposed President Elect's son, Hunter, is being investigated by Delaware for tax fraud and was making deals with Red China that might have involved family members, all suppressed by social media in a most profoundly obvious and abhorrent way. This was all on record in October. Didn't get the word? Maybe it's because of intentional repression of news like this by the social tech industry and legacy media. 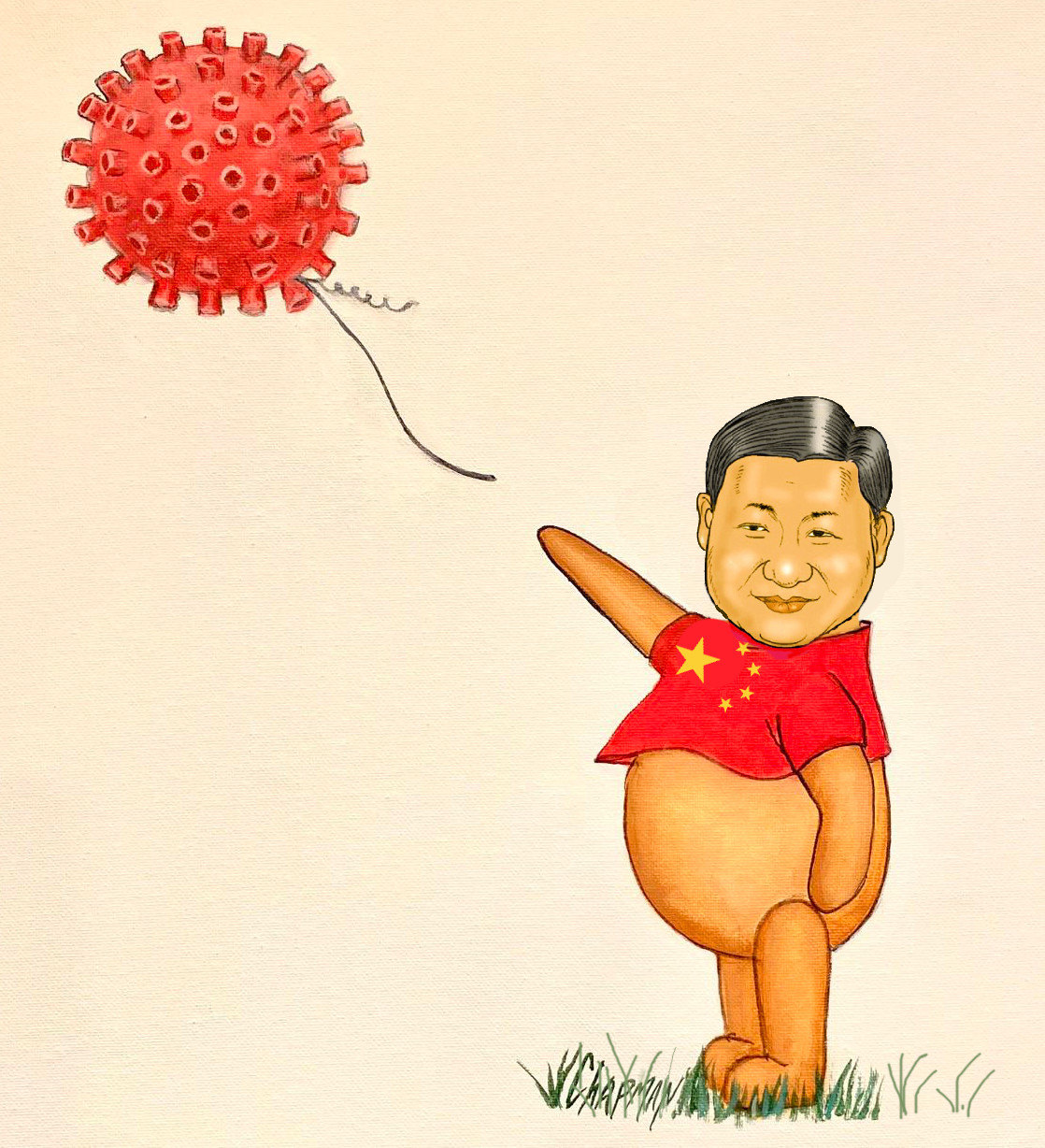 No, you think this is 'easily debunked'? Fine. Watch what happens to the Bidens. The execrable Eric Swalwell, on the Intelligence Committee no less, finally got laid. By Fang Fang, a Chinese Communist government spy. Here, enjoy some 'right wing, easily debunked' talking points:
https://www.nbcnews.com/news/world/uighurs-accuse-...
https://www.npr.org/2020/07/04/887239225/china-sup...
https://www.theguardian.com/world/2020/oct/16/thou...
https://www.msn.com/en-us/news/world/concentration...

Change the subject, derail the conversation, throw a bunch of stuff on the wall and see what sticks. Another one of your classic techniques.

"This poster commonly posts easily-debunked right-wing talking points, so it is not obvious that if this is a joke or not."

Well, it was obvious to anyone but a humorless sad soul such as yourself.

But, since you decided to hit it, so to speak, I figure I'd throw some 'easily-debunked right-wing talking points' at you.

‘Whatever’ sounds about right.

Whatever does the human rights abuses in China have to do with the courts ruling in favor of Baker’s emergency orders? If there is a connection you fail, per usual, to thread that needle.

You derail conversations into irrelevant digressions to make it easier for you to flood the zone with sh*tposts.

Swalwell was warned by the FBI in 2015 and ceased all contact immediately.

It sucks to be you but your opinion means very little anymore. By hitching yourself to that bloated Orange Carnival Barker you've lost any and all credibility. So be prepared to deal with the laughter and the mocking you're gonna recieve for the remainder of your time here on earth.

All I needed to see

Go away. Go far away.

Now, like a bad penny, I'm back. I figure AG could use the page hits.
Maybe it'll be President 'Really Popular' Harris after all.

Yeah this guy needs a ban

Hope the hammer hurts you. 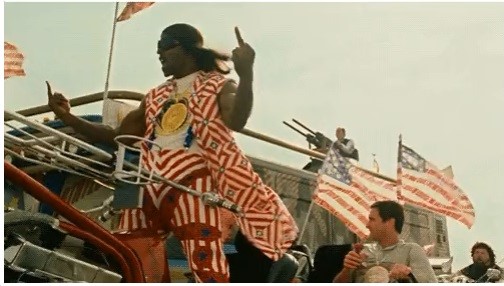 It's pretty directly a joke based on the conspiracy theory that Covid-19 was a manmade virus created by the Chinese (I like how they had to add a little Chinese flag in the background to make sure you got that part). I'd call that pretty dumb, bigoted, and dishonest, wouldn't you?

Considering the source, the intent is obvious. My pseudo-apologia is withdrawn.

Does this mean the honeymoon is off?

It's a letter L, not a letter I, and I wouldn't touch you with a ten foot dung fork, you cheeto-faced treason weasel.

It's a joke about cats. That's all. Cats love to knock things off tables. It's What They Do.

so what’s the purpose of the chinese flag?

the world is a big, confusing place

"The mind is a terrible thing to waste."

Linear thinking is a disease.

It started in China. Remember? Trump, the racist, throttled air travel on January 31 of 2020. He's a racist. Wuhan, China was the epicenter of the outbreak of what was called the Wuhan Virus until Xi started to make phone calls to his bought and paid for minions in the US. 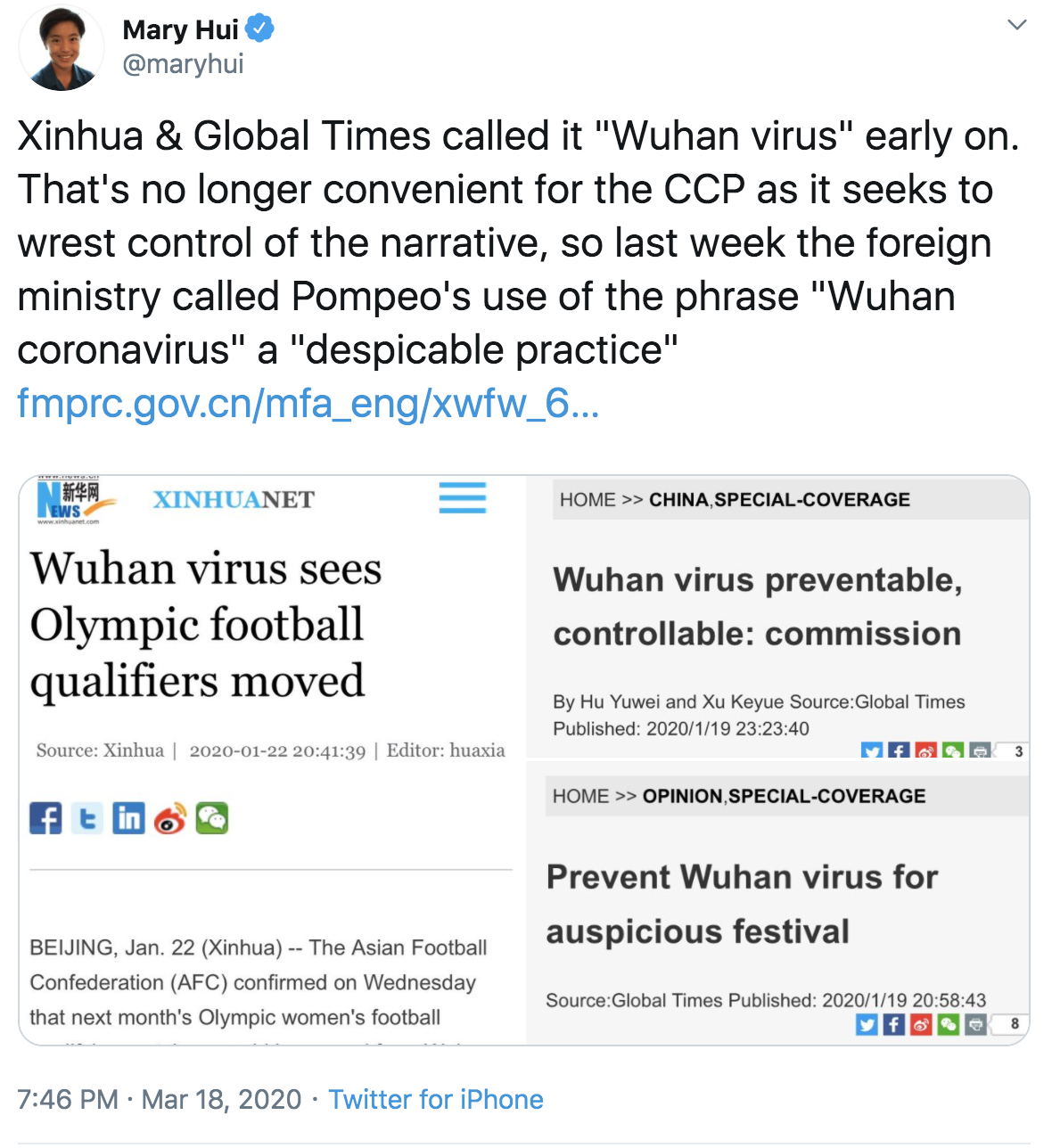 Trump is a racist.

And so are his supporters. Or they are at least OK supporting a racist and joining a coalition that includes a large groups of racists.

"...it originated from an

"...it originated from an animal, likely a bat"

Ironic. That is an animal batting stuff.

Then why does he allow the

Then why does he allow the biggest polluters in the state continue to destroy our air and water and give people disease
https://www.gazettenet.com/UMass-researchers-list-country-s-top-water-ai...