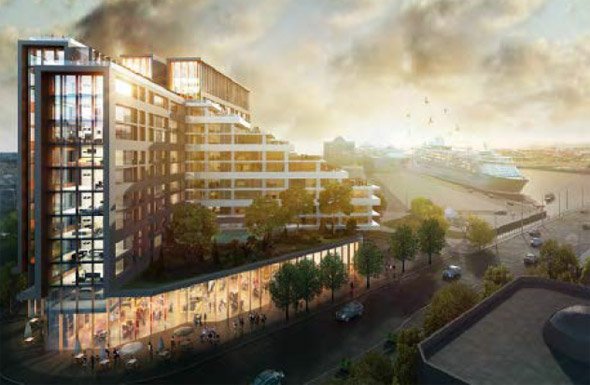 Architect's rendering of a dark and stormy day on the waterfront.

A developer this week filed formal plans for a 15-story, 411-room hotel at 660 Summer St. in the Flynn Marine Industrial Park.

The Marine Wharf hotel would be split between a Hampton Inn and Homewood Suites by Hilton, under the proposal submitted by developers Eamon O’Marah and John Matteson of Harbinger Development of Wellesley. The BRA had tentatively designated the company to build a hotel at the site last fall.

O’Marah and Matteson say the project will have benefits beyond simply making money:

The addition of both select-service and extended-stay hotel rooms at an underutilized site that is adjacent to new, more active uses, will support the expansion of the vibrant live, work, and play area that the Seaport District has become. The proposed Project's proximity to Black Falcon Terminal and Cruiseport Boston will place a variety of accommodations within walking distance to the more than 380,000 passengers who use Cruiseport Boston each year.

The Project will activate an underutilized site with enhanced streetscapes that include landscaped sidewalks and improved open spaces. The adjacent parkland owned by EDIC will become newly enlivened by improving its connections to Parcel A and the new pedestrian amenities provided there. New street lighting, signage, plantings, and public seating will enhance the currently under-defined public spaces at both locations.

The Project will provide services to new innovation-oriented economic development and job-growth opportunities in a variety of industries that operate within the Marine Park. The Project will also support the expanding water-dependent operations of Black Falcon Terminal and Cruiseport Boston, particularly with hotel use. In this way, the Project will include uses that are both incidental to and supportive of water-dependent industrial uses in the Marine Park as contemplated by the MIP Master Plan.

In addition to BRA and zoning-commission approval, the project also needs sign off by the Boston Conservation Commission and the state Department of Environment Protection because of its location near the water.

The developer hope to begin two years of construction in mid-2017.

Chapter 5 of their report has a brief summary of dealing with this.

Good use of space

Not much to complain about .. good use of empty space.

I wish the BRA just sold off the land but it's within the "park" so no chance of that. Also, it's a bit of a stretch to say a hotel is "incidental to and supportive of water-dependent industrial uses" but 1) they have to say that, in order to be allowed into the Park; and, 2) 'tis true, cruisers will stay there.

I SAID, PEOPLE ON CRUISES WILL .. WHAT? YOU CAN'T HEAR ME? THAT'S BECAUSE OF THE HORN ON TH .. NEVER MIND.

this image used for this

makes it look like a giant flaming inferno. looks like a recipe for disaster. don't see a fire escape either. where is zoning on this?

Fire escapes are so last century

They don't install those anywhere anymore.

Zoning is set by each municipality. It covers what type of building use is located where in a municipality as well as off-street parking, building heights, setbacks, overlay districts (historic for example). It is generally an evolving document based upon how each municipality wants to grow and change.

The Building Code in MA is set by the MA Department of Public Safety.

MA Building Codes generally frown upon Fire Escapes. I'm sure existing ones are grandfathered in, but a lot of building owners got rid of them. For tenant/guest safety in hotels you'll find rated stair wells (typically 2-hour*) located at strategic points throughout each floor plate. The location is defined in the building code as a length of travel one has to walk to get to each and that they can't be too close to each other. Once a person has entered a rated path of egress, that route is supposed to remain rated until one is clear of the structure.

*the rating is a construction type that has been tested by independent testing agencies (UL or Warnock Hersey) until failure. That would be a fun job, I think.

I Thought It Was Another UHub Story About Something On Fire

Clouds in the sky don't obstruct visibility at ground level. This looks like smoke billowing across the landscape, causing things in the distance to look fuzzy.

Is it possibly trying to suggest the bygone era of coal-fired steamships?

The MIP is a far cry from

The MIP is a far cry from when I worked down there from '91-'99. It's crazy how much that whole area has changed!

Maybe they brought in the storm clouds to obfuscate the use of a potentially copyrighted photo ? Or perhaps they were going for the Admiral Benbow look to remind people that sailors stay ashore sometimes, too. Anyway, if they do approve this then they need to increase the size of the Marine Industrial Park by an equal measure someplace else so as to maintain viability for its intended uses. The transfer to the BRA of an equally large and equally accessible contiguous nearby lot, for specific and exclusive addition to the MIP, should be a condition of approval.

Anyway, if they do approve this then they need to increase the size of the Marine Industrial Park by an equal measure someplace else so as to maintain viability for its intended uses. The transfer to the BRA of an equally large and equally accessible contiguous nearby lot, for specific and exclusive addition to the MIP, should be a condition of approval.

How so? According to the Master Plan and the previous UHub Article Adam linked:

The proposal, by Harbinger Development, calls for the hotel on a lot off Summer Street that is one of two in the industrial park not required to be used for marine or industrial use.

There's marine industrial lots all over First Street in Southie in an area that's not specifically zoned for it. I think they can lose a parcel in this wasteland of a park. Perhaps the industry could grow up and not have to rely on govt-protected land to make sure it's viable.

I thought that photo looked familiar. Swear someone posted that either on Universal Hub or a Southie page few months ago.

That lens flare tho