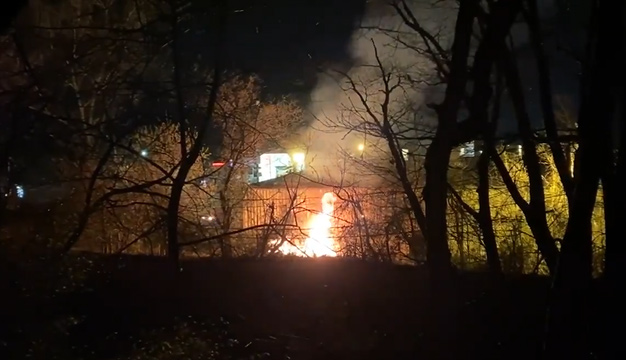 Boston firefighters responded to the rear of Party City, 1580 VFW Parkway shortly before 11:30 p.m. when a flames from a pile of burning trash extended to the building. Firefighters doused the flaming debris and the rest of the fire before it could breach the walls of the building. Arson investigators were requested since trash doesn't usually self-immolate like that. Read more.

On a drive up from Dedham today, Gio Valencia noted the length of the line to get into the new West Roxbury Popeyes, the one that opened last weekend in the middle of the pandemic, just up the road from the Dedham Chick-fil-A: Read more. 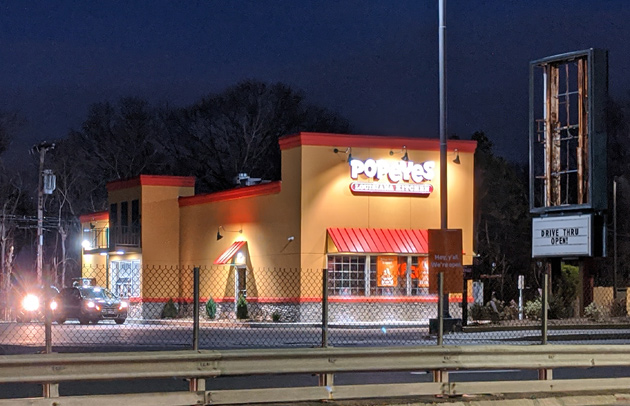 Popeyes opened its newest fried-chicken place this weekend, on VFW Parkway northbound in West Roxbury, between the McDonald's and the Burger King. Read more. 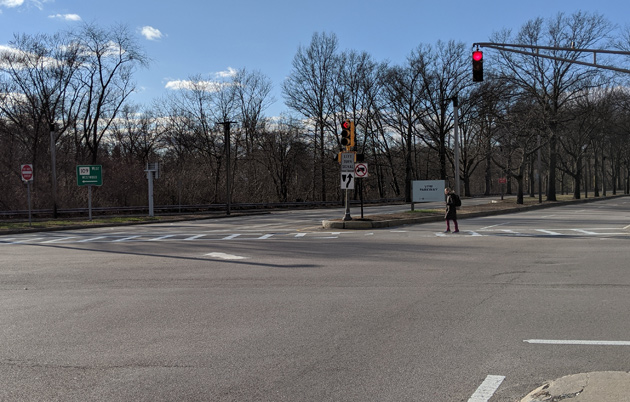 In a normal afternoon rush hour, there'd be long lines of cars on both VFW Parkway and Spring Street at this intersection. 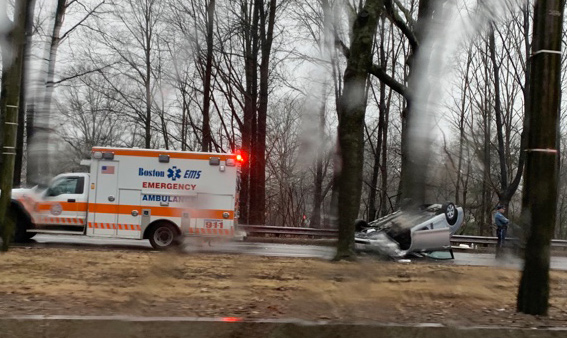 Perry Donham photographed the scene on the VFW Parkway near the VA Hospital, where a driver somehow flipped a car on the outbound side around 11:50 a.m.

The Zoning Board of Appeal today denied a developer's proposal to raze a single-family home and garage at the corner of Chellman Street and VFW Parkway and replace it with a duplex after neighbors objected to such a thing. Read more. 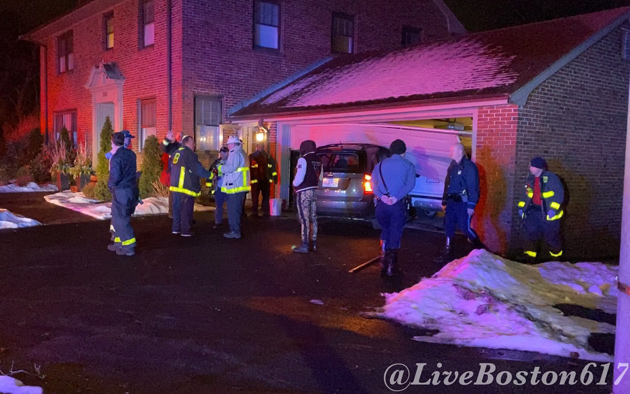 Live Boston reports no injuries after a driver heading towards Jamaica Plain on VFW Parkway drove right into the garage of the house at the rotary on the way towards West Roxbury Parkway towards Centre Street, sometime after 2 a.m.

The Zoning Board of Appeal today approved plans by B'nai B'rith Housing New England for 60 affordable apartments in a building between VFW Parkway and Baker Street, to the rear of Savers. Read more.

Chicken war close to erupting on the Dedham/Boston line 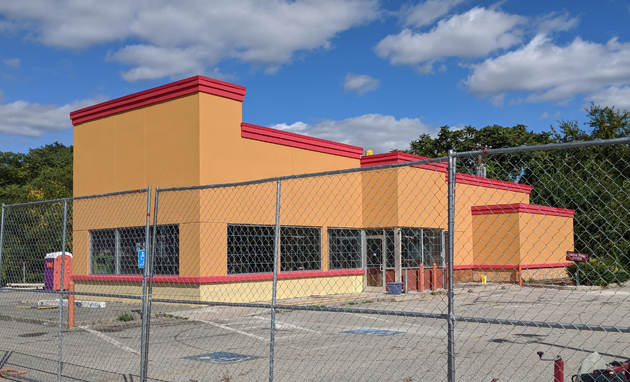 Boston's newest Popeyes, on VFW Parkway in West Roxbury, is getting nearer to opening, just a quick jog up the road from the Chick-fil-A on the Dedham side of the line. Read more.

B'nai B'rith Housing New England of Brighton wants to buy an approved but as yet unbuilt 60-unit residential project off Baker Street in West Roxbury and hopes to rent all of the units as affordable. Read more. 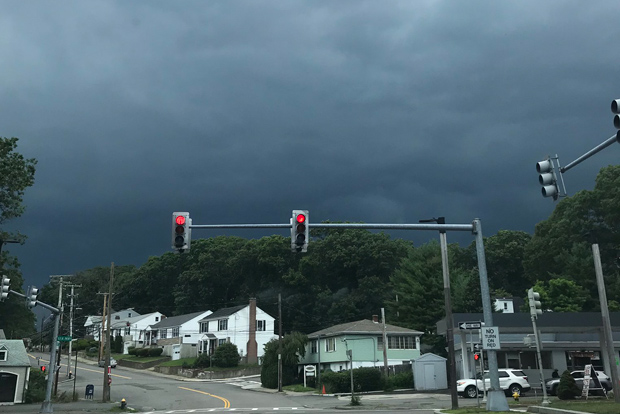 Lena takes in the view north from VFW Parkway in West Roxbury:

Being in Boston but feeling like in Stranger Things 3.

Developer Peter Davos of West Roxbury is proposing 70 apartments and 18 townhouse condos behind the 80-unit Oak Row apartment building he recently finished on VFW Parkway next to the Home Depot lot. Read more.

A tree plunged to the ground on the southbound side of the VFW Parkway at Spring Street, around 10:30 p.m. State Police shut the road to let a crew chop the treemains into small enough pieces to cart away. 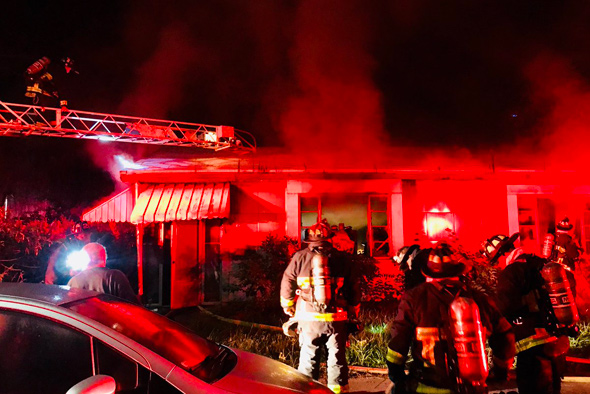 The Boston Fire Department reports firefighters responded at 2:53 a.m. to 59 Chellman St., at VFW Parkway, for a fire that caused an estimated $250,000 in damage.

The one resident of the single-story home was safely evacuated, the department reports. The cause is under investigation.

City's edge in West Roxbury to get an urban feel with new apartment complex, developer says

A Waltham developer has filed plans for its two-building, 258-unit apartment development along VFW Parkway, between the Boston Trailer Park and Prime Motors. Read more.

BPD is turn people aroun' so they don't drown on Spring Street in front of the Star Market, while State Police are turning people back on VFW Parkway near the West Roxbury Education Complex, because of the deep downpours this evening.

Boston's only trailer park could get company: Two apartment buildings 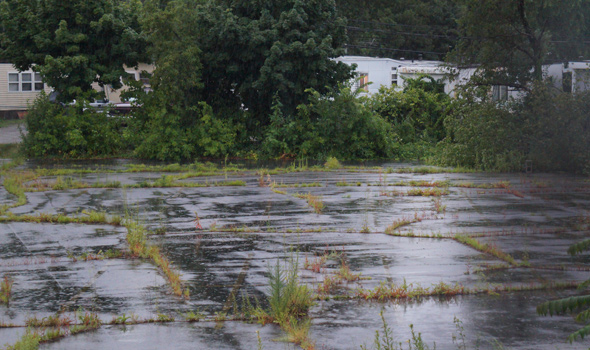 Abandoned parking lot next to the trailer park could be torn up for apartments.

A developer has proposed replacing an abandoned parking lot and scrubland on the southbound side of VFW Parkway with a two-building, 258-unit apartment complex. Read more.

Widening a parkway in West Roxbury in 1932

Widening a parkway in West Roxbury and Jamaica Plain

The Boston City Archives have posted this digitized film reel from 1932, showing the work to widen Centre Street between VFW Parkway in West Roxbury and the Arborway in Jamaica Plain.

A DPW inspector made the film (look for the brief shot of William T. Morrissey, the engineer who later got a boulevard in Dorchester named after him); his son donated it to the West Roxbury Historical Society, which in turn gave it to the Archives. 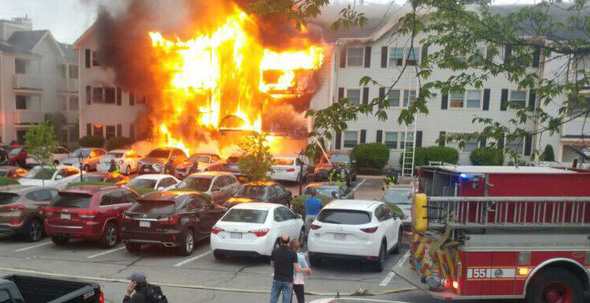 Boston firefighters responded at 5:50 a.m. to 1212 VFW Parkway - across from the Home Depot - for a fire that quickly escalated to six alarms as a leaking gas main kept feeding the flames. Read more.

The Boston Licensing Board next week hears requests from a brewery that wants to open in Roslindale Square and a convenience store that wants to start selling adult beverages on VFW Parkway. Read more.