Good thing the Tobin doesn't have toll booths anymore, because the elevator shaft up to them caught fire

The Boston Fire Department reports firefighters responded to the Tobin Bridge around 11 p.m. on Monday for a fire in the shaft that used to carry toll takers up to and down from the bridge's toll booths from Terminal Street in Charlestown.

Some plastic about halfway between the ground and the lower deck caught on fire in the shaft, which is in the process of being demolished, the department reports. There were no injuries in the two-alarm fire, but outbound traffic was delayed.

Sunset over the Tobin

Matt Frank watched the sun go down over the Tobin Bridge this evening.

Chris Devers watched the sunrise over the Tobin Bridge this morning - warning, of course, about the crummy weather coming this evening.

Sunset over the Tobin 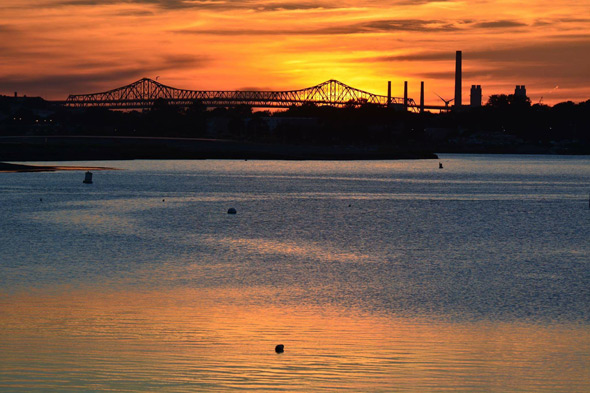 John Gage captured the sunset over the Tobin this evening. 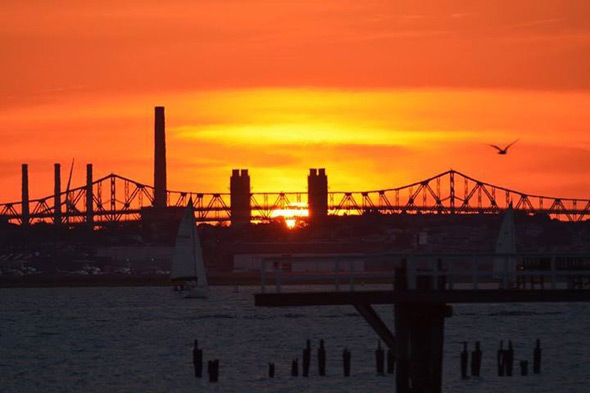 John Gage watched the sun set over the Tobin this evening.

'Romantic' rarely a term associated with the Tobin 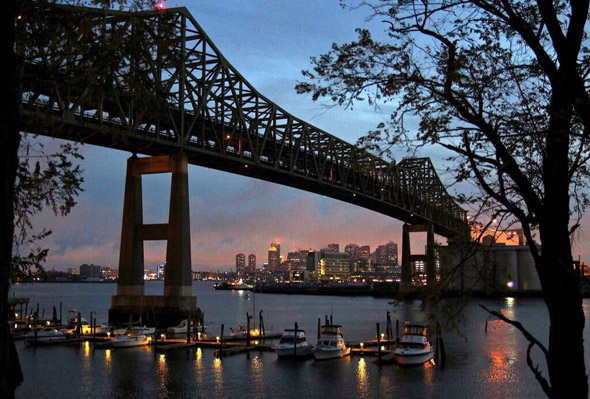 Rick Macomber watched the sun go down behind the Tobin Bridge.

Morning on the inner harbor

Ryan went for a walk this morning and captured Boston Harbor and the Tobin Bridge.

Man climbs to top of Tobin Bridge; traffic halted as negotiators try to talk him down 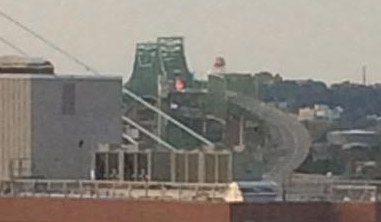 UPDATE: 9:07 p.m. Negotiators succeeded in talking him down and he's now in police custody.

The Tobin Bridge is shut to inbound traffic as Boston and State Police negotiators try to convince a man who climbed the girders up to the top to come down. Just in case, the Coast Guard and the Boston Fire Department have personnel stationed on and near the Mystic River. 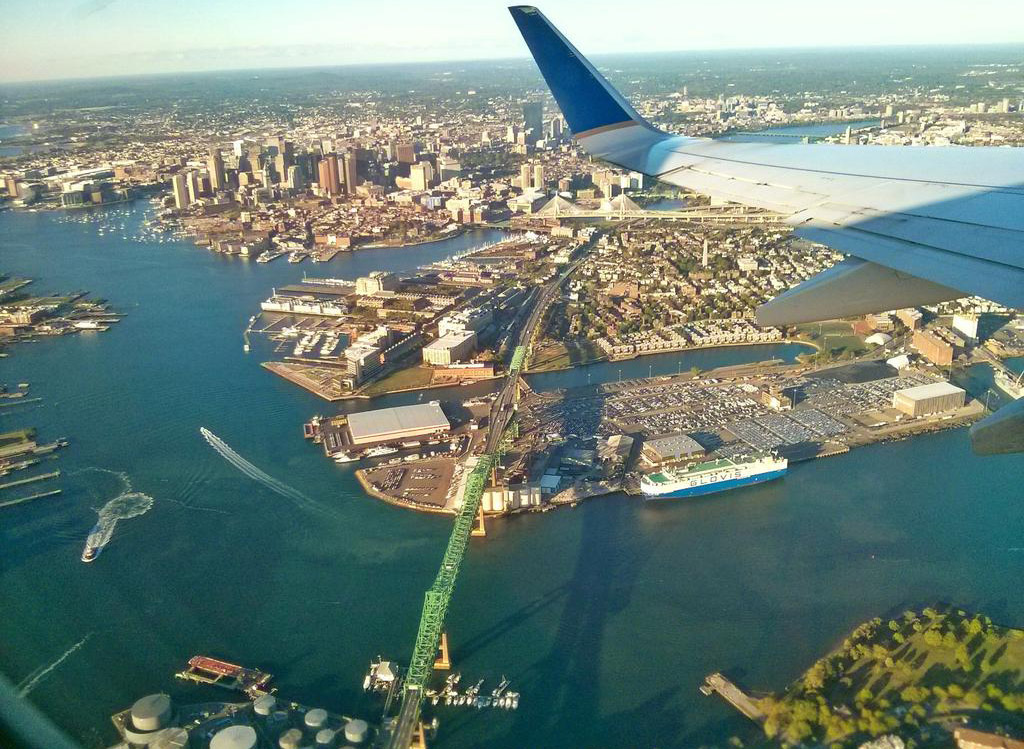 Be Brilliant got a bird's-eye view of Boston Harbor, the Mystic River and the Tobin this morning.

Man apparently jumped off the Tobin Bridge this morning

State Police investigating an abandoned motor vehicle on the Tobin Bridge at about 6:40 this morning observed the body of its apparent owner on a Charlestown street below the bridge. A death investigation is now under way by State Police detectives and other specialized units. The evidence does not currently suggest foul play.

Another person jumps off the Tobin Bridge

The Suffolk County District Attorney's office reports on an incident shortly before 7:30 p.m.:

State Police detectives assigned to the Suffolk DA's office, along with uniformed troopers and specialized State Police units, are on the upper deck of the Tobin Bridge and on the street below in Charlestown for a death investigation involving an adult who left a motor vehicle and went over the rail. The preliminary evidence does not suggest foul play, but the investigation is still in its early stages.

Chelsea Police report Officer Paul McCarthy received an award for saving the life of Mostafa Laassal, who, allegedly, on being pursued by police after stabbing his wife, jumped off the top level of the Tobin Bridge, only to be snared in safety netting installed for workers on the bridge repainting project:

Traffic across the Tobin Bridge came to a halt around 10 a.m. when a man being pursued by Chelsea Police jumped out of a livery car, went to the side of the bridge and jumped.

Ted Pendergast reports he got caught in safety netting set up for the bridge repainting project. He'd brought a knife with him and tried cutting through the netting, but first responders managed to get to him before he could. They "packaged" him and put him in an ambulance for transport to a nearby hospital.

We're about to transfer passengers from one bus to another... IN THE MIDDLE OF THE TOBIN!

Ask not for whom the Tobin tolls ...

State Police say they've identified a Chelsea man as the person who caused a crash that injured five people on the Tobin Bridge around 11:30 a.m. and that once they find him will charge him with a variety of offenses, including speeding and leaving the scene of an accident.

State Police say the Corolla driver, 38, ran down the ramp from the lower deck into Chelsea, leaving his passenger, a 38-year-old woman from Roxbury, to fend for herself.

The state says it's permanently blocking the leftmost cash lane on the bridge tonight as it begins to prod motorists into getting an E-Z Pass transponder in preparation for all electronic toll collection later this year.

If you have a fondness for the leftmost tollbooth, visit it before 10 tonight.

It appears that the deceased was on foot and went over the rail on the northbound side of the bridge.

MassDOT said today it's begun firing up the new toll system that will replace the current Tobin toll plaza this summer:

The cameras and technology, necessary to collect tolls at the posted speed limit, are in place as motorists exit the Tobin Bridge to Rutherford Ave or Interstate 93 (customers may notice a flash associated with this testing). MassDOT will work to limit the intensity of the flash by altering the ambient lighting at the toll collection site. The cameras are capturing license plate images which will allow MassDOT to bill vehicle owners who do not have an E-ZPass transponder.