Police can't use stored body-camera video collected inside a home in one case as evidence to arrest somebody in another case without first getting a warrant to search it, the Supreme Judicial Court ruled today. Read more.

BPD officers worked 9,000 hours at bigot march, but not a second was captured on body cams

WBUR reports Boston Police do not require officers working overtime to wear the cameras, and all the officers who worked the parade and subsequent arrests were on overtime.

Police to begin rolling out body cameras on Monday in Dorchester, South Boston

The Dorchester Reporter reports officers in districts C-11 and C-6 and members of the BPD gang unit will start donning body cameras on Monday.

Mayor Walsh announced today that "the City of Boston plans to expand the body-worn camera program through a phased-in approach and the City is engaging in conversations with the police unions." Read more.

The mayor's office says it's not waiting for the results of a pilot study on BPD body cameras - its put $2 million for "permanent adoption of police-worn body cameras" in the proposed budget for the fiscal year that starts July 1. Read more.

Northeastern researchers have released a preliminary report on a Boston Police pilot of body cameras - and say they found a small, but noticeable decrease in problems in interactions between officers and the public: Read more.

Around 1 p.m. on Tuesday, District E-18 officers responded to a report of a house break-in on Avila Road in Hyde Park - including one officer wearing one of the body cameras the department is testing out. Read more.

WBUR reports a Suffolk Superior Court judge today agreed with the city that it can order 100 police officers to wear body cameras to test whether the system could work in Boston.

The city and the patrolmen's union had worked out an agreement for voluntary participation in the pilot, but BPD Commissioner William Evans announced plans to order 100 officers to wear the cameras when none actually volunteered.

Cops on the beat may resist body cameras, but some of their bosses will try them out

As the city and the police union await a judge's decision on whether Boston Police can force 100 officers to wear body cameras in a pilot, BPD is announcing that eight commanders will start wearing the devices. Read more.

The Herald reports the Boston Police Patrolmen's Association is aghast at the way the city ordered 100 officers to test out the cameras when the union and the city negotiated such a nice agreement calling for officers who volunteered to wear the cameras to participate.

You may recall, of course, that Police Commissioner William Evans issued his order when no officers volunteered.

Mayor Walsh and Police Commissioner William Evans today announced they have reached a deal with the Boston Police Patrolmen's Association for a six-month, $500,000 pilot to test body cameras worn by 100 volunteer officers.

However, no date for the beginning of the pilot - which advocates had once hoped would start this spring - was announced.

Start date of the pilot program, along with other specific policies related to body cameras, are in the process of being finalized by BPD.

Boston police commissioner: Not opposed to body cameras, but doesn't want to be rushed into them 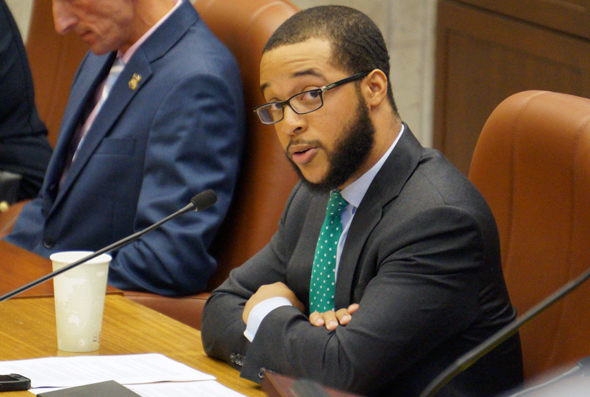 Boston Police Commissioner William Evans told a City Council committee today he wants to learn from the mistakes of other cities with body cameras before equipping Boston police officers with them. Read more.