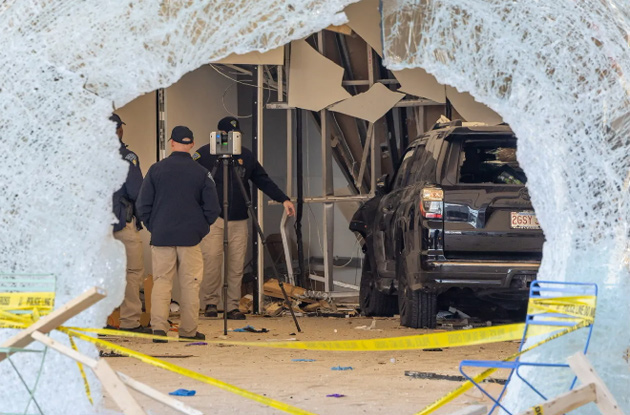 The Plymouth County District Attorney's office reports Bradley Rein, 53, of Natick, has been charged with reckless homicide by motor vehicle for the crash at the local Apple store yesterday that killed one and send numerous other people to area hospitals, many with serious injuries. If convicted, he could face up to five years in state prison.

The owner of a Hingham printing company says Massachusetts Republican Party Chairman Jim Lyons is blaming it for some spat it has nothing to do with and has barred the party and official Republican candidates from using its services. Read more. 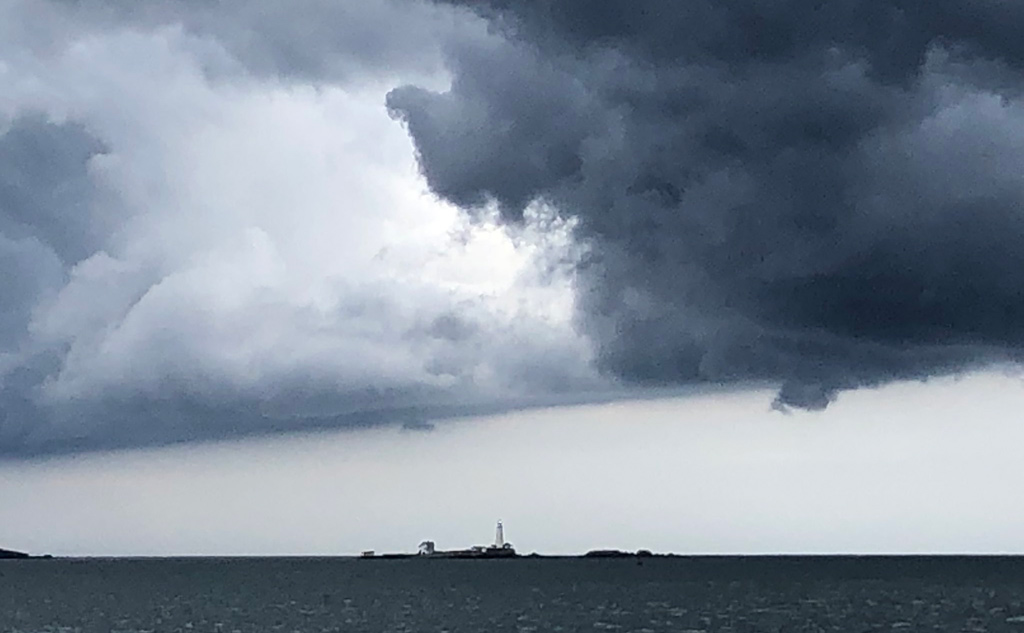 Michael Spicher couldn't help but notice the ominous clouds from the ferry from Hingham back to Boston this afternoon. Read more.

Swimmers warned to stay out of the water off Hingham.

Life in line: 'Please buy all my produce, I have SO much produce, I don't know what to do with it!' 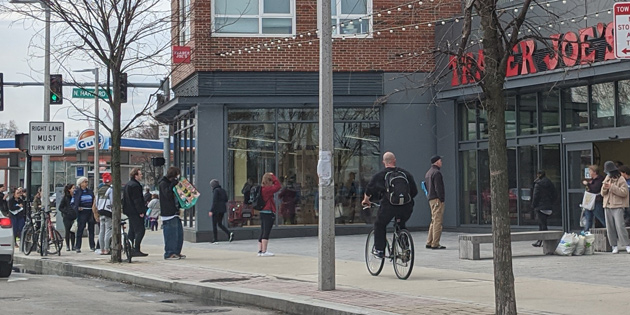 Local Trader Joe's remain open, but stores are limiting how many people they'll let in at a time - as one person exits, another one from the line outside is let in.

At the Hingham store this morning, the manager got on a bullhorn to alert shoppers to a two-per-thing limit, except on produce, which he pleaded with them to buy, as Geminiluvin shows: Read more.

Man barricades himself inside building in Hingham Shipyard; shoots at police

Jessica Bartlett of the Boston Business Journal videoed a deer swimming alongside her Hingham-to-Boston ferry this morning. 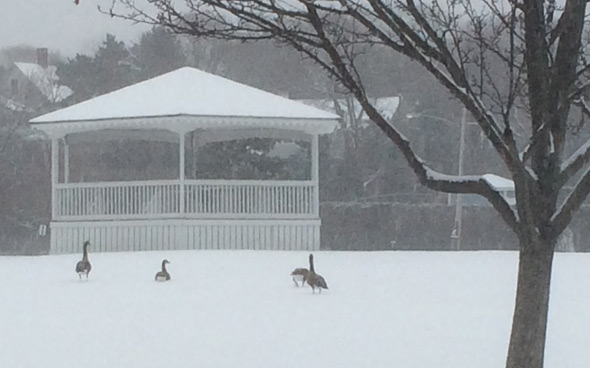 Neil the roving UHub photographer went for a stroll in Hingham this morning.

No, you didn't just win the Publishers Clearinghouse sweepstakes

Hingham Police report a local resident was convinced by a caller that he'd just won the sweepstakes and all he had to do was provide his Social Security number, his date of birth and his Mass. driver's-license number. Police say he did not win the sweepstakes, but he now has to watch out for identity fraud.

Police in Hingham seek person with screwed up priorities

A boat's name says a lot. We'd like to talk to whoever dumped this boat/trailer today in the Hingham Yacht Club lot. pic.twitter.com/aGitcABC2x 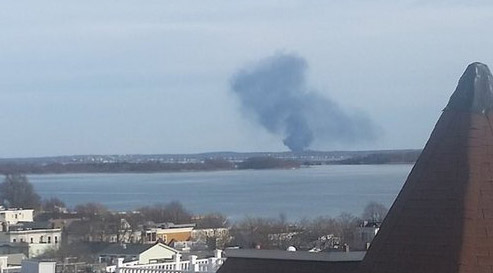 Andrew Davis in South Boston was among the many who wondered what was burning on the South Shore this afternoon. It was a tire dump on Hobart Road in Hingham.

A pet's last visit to the dog park

Dave Pham wondered why there was a box of chew toys at the Stodder's Neck dog park in Hingham. Then he read the note on the side.

Weather at the end of the world

Don't fence her in

Hingham Police report firefighters managed to cut away the fence and the deer ran away.

The officer let him continue on his way to Lottery HQ in Braintree with just a warning to slow down.

Woman reaches over to pet her cat, only it's a raccoon

The episode in Hingham did not end well for either party, although the raccoon got the worst of it.

World's End was once an island, but is now a gorgeous property maintained by the Trustees of Reservations. Landscaped by Frederick Law Olmsted, it consists of approximately 250 acres of paths, meadows, woodlands, and seascapes.

The sweetest blog of the day

Gabbie's Goodies is the chronicle of a start-up bon-bon shop in Hingham.

Living history: Court ruling on whether some Hingham residents can use a beach hinges on colonial ordinance

The Massachusetts Appeals Court ruled today that some families living on Hingham's Crow Point can continue to use a small beach that had been blocked off in 2004 by some other families closer to the water - decades after the entire neighborhood first began using the beach.

In its ruling, the court said a lower-court judge erred in siding with the blockers by incorrectly interpreting part of the Colonial Ordinance of 1641-1647, which codified what is still Massachusetts law on property rights of seaside residents.

At issue was whether the man who owned the land in the late 1800s could separate ownership of the "tidelands" directly next to the water - the beach - and the "uplands" a bit further inland in his will. The lower-court judge said that could not be done under the Colonial Ordinance, because you couldn't have tidelands without uplands, and that therefore the beach access his will granted to neighbors was invalid.

In his reliance on the Colonial Ordinance for the conclusion that a landowner cannot own tidelands without ownership of abutting uplands, the judge appears to have applied a rule of construction that has developed from the Colonial Ordinance: in construing deeds of land adjacent to the sea, "[t]he 'presumption of law is, that title to the flats follows that of the upland on which they lie, and proof of title to the upland established a title to the flats.' ... '[A]n owner may separate his upland from his flats, by alienating the one, without the other. But such a conveyance is to be proved, not presumed, and therefore ordinarily proof of the title in the upland thus bounded carries with it evidence of title in the flats.' " ... However, as the quoted language makes clear, the principle is not absolute, and it is possible to sever tidelands from abutting uplands.

However, the ruling is only a victory for half the 24 families that sued - the court said the easement applied only to the 12 properties specifically covered by "an instrument executed by the trustee under the will of Samuel Downer, dated May 14, 1929."