New England Folk Festival Association President Janet Yeracaris announced today the group has called off its annual festival in Acton next month because of Covid-19, in part because part of what makes the festival so special is what also would put attendees at risk: People of all ages holding hands and dancing face to face in tight quarters. Read more.

This is nuts: Car in Acton goes up in flames, likely after squirrel's nest catches fire 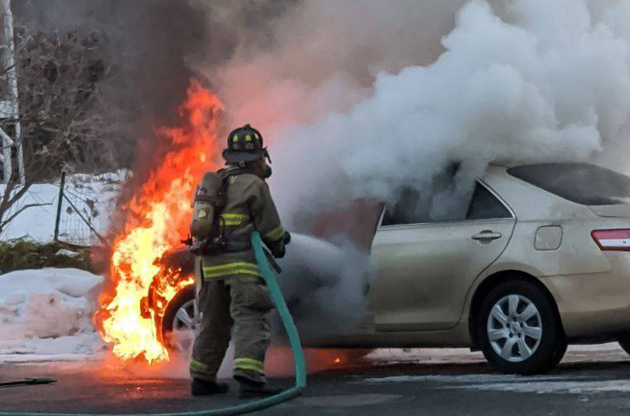 Chestnuts roasting on an open fire? Acton Police report a car erupted in flames this morning.

Early investigation indicates it was possibly a squirrel's nest.

The owner of the Incredible Shrinking Sears and KMart announced more closings yesterday, in a move that will mean eastern Massachusetts will be Kmart-free save for one remaining outlet in Hyannis.

The Supreme Judicial Court ruled today that the town of Acton can't give a church in its historic town center a grant to repair its stained-glass windows, at least for the time being, not because of the First Amendment, but because of a section of the Massachusetts constitution related to grants to private institutions. Read more.

At 7:38 a.m., Finn tweeted from aboard an inbound Fitchburg Line train:

we're supposed to be arriving in Boston now. Instead we're in Acton going in the *reverse direction*.

Oops, they did it again: Local biotech firm sues Texas rival for second time over patent

AsymmetRx Medical, an Acton company that holds a patent on an antibody used to diagnose prostate cancer, is suing Santa Cruz Biotechnology of Dallas on charges the Texas company offers a product that uses the same basic idea.

In its lawsuit, filed this week in US District Court in Boston, AsymmetRx, founded on the work of a Harvard researcher, says Santa Cruz started selling its product after it had agreed in 2007 not to do so - to settle a similar lawsuit AsymmetRx filed over the same exact patent.