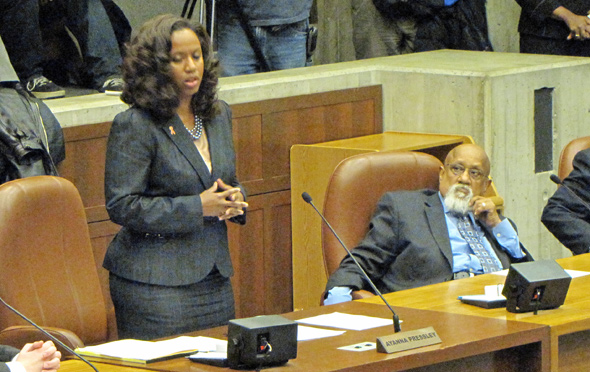 Pressley explains what Turner has meant to the city and to her, before turning to him to say she would vote to expel him.

City Council President Mike Ross says he is reluctantly urging his colleagues to expel Roxbury Councilor Chuck Turner at a meeting on Wednesday.

In a letter to councilors, Ross said he appreciates the long years of hard work Turner has put in, but said the council has little choice but to expel him immediately now that he's a convicted felon, rather than waiting to see if a judge lets him out on probation in January, as Turner had requested, in the hopes he could finish out his term:

We have but one judicial system in this country, and whether we personally agree with the verdict or not, a jury of his peers found Councilor Turner guilty of very serious crimes. As public officials, we are sworn to uphold the laws of this city, state and nation. We are not above the law and none of us is above the rules we have established as a body. If we act as if we are this body loses its credibility, its integrity and the trust of the people we serve. Many are cynical of government as it is, we cannot add to their distrust.

Ross said if the council agrees, he would also move to continue paying Turner's staff members to continue their constituent work and to hold elections in Turner's District 7 as soon as possible.

The council meeting begins at 3 p.m. in the council's fifth-floor chambers in City Hall.

Menino: Time for Turner to go

Chuck Turner has forfeited his right to serve, mayor says.

Boston.com talks to Jim Hennigan and Matt O'Malley, one of whom will be elected on Nov. 16 to represent West Roxbury and Jamaica Plain on the city council. Both say they would vote to expel turner because of his corruption conviction last week. City Council President Mike Ross set the date so that whoever wins the election to replace John Tobin can join the expulsion discussion and vote.

Turner: 'I would rather die in jail' than admit taking a bribe

Convicted City Councilor Chuck Turner maintained his innocence and blasted a conspiracy by the powers that be to bring him and former state Sen. Dianne Wilkerson down, in an interview tonight with Joe Heisler on BNN.

City Council to consider whether to expel Chuck Turner on Dec. 1

The City Council won't wait until after Chuck Turner is sentenced on extortion and perjury charges to consider whether to strip him of his seat on the council.

In a letter to Turner today, Council President Mike Ross said he's called a hearing of the council after its regular meeting on Dec. 1 - a date chosen to let whoever wins the vacant District 6 (West Roxbury and Jamaica Plain) have a say. That district's next councilor will be selected in a special election on Nov. 16.

Chuck Turner, convicted last week of extortion and perjury, said today he won't appeal - but will fight any attempt by his fellow councilors to boot him out of office. In a statement on his Web site, he writes:

Candelaria Silva says she was a Chuck Turner supporter right up until he got on the stand and testified at his corruption trial last week. Now, she says, all she can do is come up with a modern tongue twister:

But she has no love for Reluctant Witness Ron Wilburn, worries that "the other perpetrators of fraud in the licensing bureau are still hiding in plain view," concludes:

Chuck Turner: Pride before the fall

Mike Ball considers the case of the now convicted city councilor, concludes Chuck Turner fell victim to his own myth:

He has long been great on bluster as well as leveraging his race, age, class and whatever tools he finds lying around. Unfortunately the 70-year-old Harvard grad has often done so without those messy facts or provable details.

A bribe is still a bribe even if you only take part of it: Jury convicts Turner

The jury convicted him on one count of extortion for taking the money and three counts of perjury for lying about it. At his trial this week, Turner said he either couldn't remember taking the money or even meeting Ron Wilburn that day or that he engaged in a "preacher's handshake" in which he never looked to see just what it was Wilburn was handing him. His own lawyer argued that, maybe, Turner took some money, but tried to cast Wilburn - who testified for the prosecution only on threat of imprisonment - as a bigger slime, charging him with pocketing $800 of the $1,000 bribe money from the FBI.

Gintautus Dumcius at the Dorchester Reporter tweets Turner will be sentenced on Jan. 25.

The Globe and BZ radio report in breaking news that Chuck Turner was just found guilty on all four counts.

As we wait for a verdict, David Boeri fills us in on the closing statements; talks to Turner outside the courtroom about what he'll do if he's convicted and goes to jail (organize inmates, of course).

So he takes the stand against his lawyer's advice and then doesn't remember a thing about his meeting with the Reluctantly Cooperating Witness.

Cooperating Witness says he also bribed Wilkerson, detail cops, but with his own money

The Herald reports from the Chuck Turner trial.

Why the feds went after Chuck Turner

Uncooperative Cooperating Witness got $30,000 to help make the case against Chuck Turner

WBUR reports on the payment to "Cooperating Witness" Ron Wilborn, the restaurant owner who helped bring down Dianne Wilkerson and who is saying he won't testify against Councilor Chuck Turner in his corruption trial, which got underway today.

The Dorchester Reporter details who's on the prospective prosecution and defense witness lists for Councilor Turner's payoff trial, slated to begin Wednesday in US District Court in Boston. Why, Sam Yoon might have to fly back from Washington. One interesting possibility on the prosecutors' list: An executive from Martignetti Companies, a Norwood-based wine and liquor distributor.

The Globe reports riders of the 28 in Mattapan love the new, larger buses the T has put on the route but that people in Grove Hall are, um, disquieted by the buses. The Globe doesn't cite any specific complaints about the specific new vehicles in Grove Hall, but seems to indicate that City Councilor Chuck Turner wanted the buses pulled off the roads after one month because of the legacy of 30 years of the T treating the neighborhood like dirt.