Person shot in the head in Allston

Around 10:15 p.m., Scott Eisen reports. The homicide unit was called to the scene, near Cambridge Street, due to the severity of the victim's injuries.

Shell casings were found around the corner on Pratt Street, near the Garage nightclub parking lot, which was taped off as a possible crime scene. 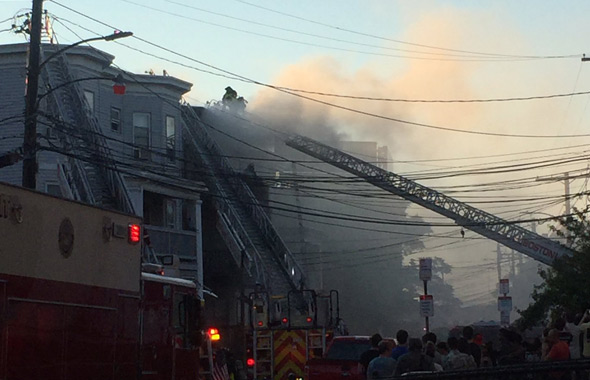 A fire that started on the first floor, then spread up the outside walls of 27 Linden St. in Allston, displaced 13 people and did an estimated $750,000 in damage but caused no injuries, the Boston Fire Department reports. Read more.

Masshole delays Green Line when he starts to bitch, whine

After trying, but failing, to cut off a trolley at Linden Street and Comm. Ave. around 6:30 p.m., the driver of the Escalade could have backed off, let the trolley, and the other trolley coming from the other direction, through, then been on his way. But, no, of course not. As URNotinvisible shows, the guy got out of his land yacht and began yelling at the T driver.

As of 7 p.m., the T reported no problems due to yelling people standing on tracks, so presumably this particular logjam has been fixed (you didn't, however, ask about the signal problems at Park Street).

The Boston Licensing Board votes Thursday whether to let the Russian Benevolent Society on Linden Street more than double its seating capacity, stay open an hour later at night and add bottle service and a patio.

The society, once a social club that mainly rented its space out for functions, has already won approval from city inspectors to increase its capacity from 214 to 440 patrons.

The mayor's office and city councilors Mark Ciommo, Steve Murphy, Ayanna Pressley and Felix Arroyo all supported the request for a license change, saying the society has been very responsive to requests from the community and police.