The statute of limitations begins when somebody is served notice of something, not when an official signs the notice, court rules

The Massachusetts Appeals Court ruled today that a judge improperly dismissed an inmate's disciplinary appeal because she decided the statute of limitations started when an official denied the inmate's appeal, not when the inmate received notice of that, several days later. Read more.

Imagine being able to take commuter rail from here to Philadelphia

Forget for a moment the question of why you'd want to do that, on a slow trip that would involve changing trains several times. The New London Day reports Connecticut legislators are considering a plan that would extend that state's commuter-rail system, which now ends at New London, to either TF Green Airport in Rhode Island or Worcester's Union Station - both of which are now also served by MBTA commuter rail. Read more.

The Daily Collegian reports on the annual Blarney Blowout festivities this past weekend, featuring crowds more akin to what you might see in Florida, only more warmly dressed and in a state that still has Covid-19 restrictions.

Worcester hospital to Mass General Brigham: Keep your grubby hands away from Westborough

Alexa, how do you sue Amazon?

Two Massachusetts residents say Amazon's Alexa devices are "recording every conversation she has with users" but without the consent required under the state law on recording conversations, so they've sued. Read more.

The Hampshire Gazette reports the Commonwealth's Flagship Campus has ordered all students - including off campu - to stay in their rooms except to get testing or meals due to an outbreak that has so far hit several hundred. The Daily Collegian reports one frat was suspended for "two massive back-to-back parties, packed to the brim with young people dancing and drinking."

Worcester man charged with using other people's credit-card numbers to snap up $100,000 worth of MBTA commuter-rail passes for resale

A Worcester man was arrested this week on charges of wire fraud and aggravated identity theft for a scheme in which he'd allegedly buy commuter-rail passes to resell them at a discount over their face value. Read more.

After trip to Washington, Worcester hospital employee no longer has a job; first IDed for her role in an attack the night before the riot by own daughter

UMass Memorial Medical Center reported this evening that one of its caregivers who may have stormed the Capitol during the failed coup attempt "is no longer a part of our organization." Read more.

Update: One UMass employee no longer has a job.

State releases 'final' report on middling-speed rail to Springfield and Pittsfield, which calls for further study

You can read the whole thing here, which hinges in large part on talks with CSX on whether passenger trains can or can't travel on its tracks west of Worcester, but bottom line: Don't be penciling in a relaxing, roughly three-hour ride to Pittsfield on your schedule anytime soon.

No snow days for Worcester schools, but some kids got an Internet-outage day today

Parts of Worcester lost their Internet service today - along with cable TV and credit-card processing.

Worcester Public Schools, which announced in October it wouldn't cancel school because of snow, at least while classes were being taught remotely, announced today: Read more.

Albany, NY wants in if we ever build middling-speed rail out to the Berkshires

The Albany Times-Union takes note of the latest Massachusetts effort to consider extending the Worcester Line to Springfield and maybe even Pittsfield and asks that as long as we're going to the bother, could we push the line a bit further and hook them up? Read more.

State to re-open Worcester field hospital in a couple weeks

Gov. Baker today announced the state will be re-opening a 240-bed field hospital in the DCU Center by December as the Covid-19 hospitalization rate continues to rise.

Police can't pin somebody down to have his blood drawn after an OUI crash, even with a warrant, court rules

The Supreme Judicial Court today ordered a new trial for a man convicted on OUI charges for a 2014 crash because state troopers handcuffed him and restrained him so a nurse could withdraw two blood samples that were then used against him at his trial. Read more.

Franklin Matters posts a copy of an alert from Town Administrator Jamie Hellen that a town employee provided what should have been secure login information that enabled a hacker to drain $522,000 from town accounts. Read more. 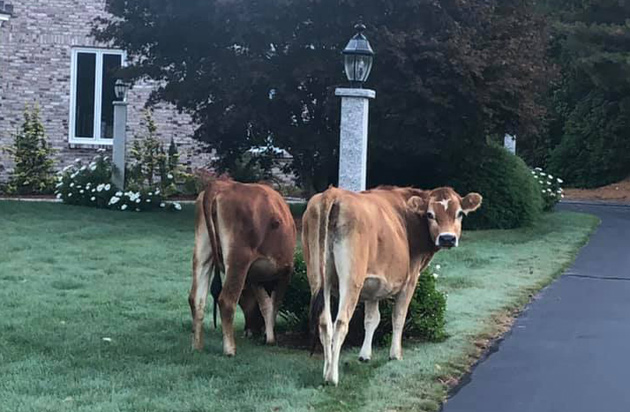 Police in the I-495 town of Westborough report four cunning cattle from the Uhlmans ice-cream stand went on the moove this morning before finding a particularly tasty lawn on Wachusett View Drive. Police say that with the help of the town animal-control officer and Uhlmans, they were able to wrangle the bovines back to the ice-cream stand.

The Massachusetts Appeals Court had to consider laws and court decisions dating to the 1600s to determine which quarreling neighbors could park and drive on an unpaved path down to a lake in central Massachusetts, but sent the case down to Superior Court yesterday for a judge there to determine whether one of the neighbors could keep his two-slip floating dock in the water at the end of the path. Read more.