Boston Restaurant Talk has the news, hot out of the oven.

Area Aussies, chefs team up for benefit for bushfire victims

KO Pies has become the Dread Pirate Roberts of East Boston Australian meat pies: The East Boston Times-Free Press reports that after getting ready to shut down this year, KO will be open through 2020.

Boston Magazine reports that KO Pies owner Sam Jackson plans to sell his shipyard eatery and move out of the region. Read more. 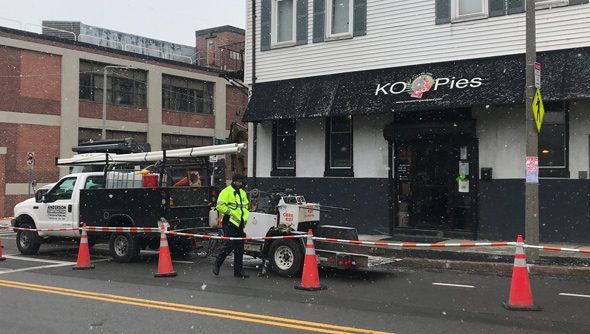 UPDATE: KO Pies reports the blocking was by a contractor working for Verizon, that the shop will be able to re-open today and that Verizon swore that, in the future, any similar work would only be done when the shop is normally closed.

KO Pies reports it had to close its South Boston outlet this morning "until further notice" when an excavation contractor showed up and blocked off all access, with no advance notice.

Needless to say, they're not very happy: Read more.

Number of Australian coffee shops in Boston set to double

CuppaCoffee, which serves coffee and Australian meat pies on Merrimac Street, is planning a second location in the 275 Albany St. residential development.

When finished, 275 Albany will house 400 apartments in two buildings, across the street from the Ink Block project.

Couple must really love them some Australian meat pies

KO Catering reports its East Boston Shipyard location will be closed on Saturday - for a wedding.

Couple extra hours to get Australian meat pies in East Boston; no extra time for Chinese food in Dorchester

A meat pieThe Boston Licensing Board this week gave KO Catering and Pies, 256 Marginal St. in East Boston, two more hours in which to serve up its flaky down-under comestibles.

The Australian meat-pie place convinced the board - along with neighbors and city officials - to extend its closing time from 10 p.m. to midnight. City officials and members of the Jeffries Point Neighborhood Association said KO has proven an asset to the area as the shipyard is revitalized.

There was no such luck, however, for Yong Hon, 772 Blue Hill Ave., Dorchester, whose request to extends its closing time from 1:30 a.m. to as late as 2:30 a.m. on weekends was quashed by the board.

Unlike in the East Boston case, city officials rose as one to urge rejection, so that people getting out of bars would have one fewer place at which to raise hell.

Something fishy in East Boston

We did not set out to explore Harbor Arts' Shipyard Gallery in East Boston today. We just wanted some Australian meat pies.

Limeduck reports the Cuppacoffee being built on what used to be a Merrimac Street parking lot is close to opening.

The best thing she's ever eaten in Boston

Cissy Huang says it's the sausage roll by KO Catering and Pies, which she made the mistake of tucking into on the T:

I had to stop eating it midway as to not frighten the people on the T with my slavish devotion.

Sometime this fall, A Street in South Boston will be getting KO Catering and Pies, "Boston's first Australian food truck serving savory pies and fresh food off the grill." No word if they'll also be serving vegemite sandwiches.