For the second time, a federal court has ruled that Mt. Ida College owes students nothing for the way it suddenly shut down, not even those who were screwed because the closure didn't leave them enough time to find placement at a different school. Read more.

UMass Amherst calls off May commencement

UMass Amherst Chancellor Kumble Subbaswamy told students and parents that he's postponed graduation exercises originally set for May 8 and that while he wants to honor seniors at some point, he really has no idea when that might be possible: Read more.

UMass Amherst, which had earlier said it hoped to have students return to campus on April 6, today announced it's just having students move out for good this weekend. In an announcement to the campus and parents, Chancellor Kumble Subbaswamy writes: Read more.

Entire UMass system shifting to online classes, but maybe not for entire semester

Word first broke at UMass Lowell of a new policy that applies to all five UMass campuses. Unlike at many other colleges, however, there's still a chance UMass students could return to campus, on April 6. Read more.

UMass Amherst set to remain open to students after spring break, but says to stay tuned, just in case

But the Commonwealth's Flagship Campus would prefer it if students express their hatred for Nazis in ways that do not include the use of profanity if at all possible. Read more.

So UMass Amherst will be competing with UMass Boston after all, at least in some fields

When officials announced UMass Amherst's plans to buy the Mt. Ida College campus less than a mile from the Boston line, they offered vague statements about how they'd use it to let UMass Amherst students get internships in Boston and tie into the local hi-tech community. Read more.

Why is UMass Amherst moving into the Boston area?

Aaron Lecklider, chairman of the American Studies department at UMass Boston is not real happy with the news that the UMass system has found upwards of $50 million to buy the Amherst campus a Newton outpost even as the Boston campus is cutting departments and laying off staff:

The Mt. Ida campus will be used not by (minority-majority, working-class) UMass Boston, but rather by (predominantly white, middle-class) UMass Amherst in order to give their student body access to Boston internships. In other words, the UMass system wants to facilitate internships in Boston for students in Amherst while depriving resources to the 18,000 students on the existing campus in Boston. The Amherst campus will now have a campus in Boston that is literally segregated from the existing Boston campus. ...

Apparently, having a sister school in Boston isn't enough for UMass Amherst

The Globe reports UMass Amherst is buying Mt. Ida College in Newton, which it will shut down and remake as UMass Amherst's Boston campus (UMass Amherst Boston?). Current Mt. Ida students will be able to transfer to UMass Dartmouth.

In 2014, UMass Amherst senior James Haidak made headlines with a lawsuit alleging the college sexually discriminated against him for expelling him in what he said was a he said/she said case involving a UMass student he'd been dating.

Yesterday, a federal judge in Boston threw out his suit, saying that while UMass made a mistake in its disciplinary proceedings by delaying them five months, in part because of summer break, Haidak deserved everything he got. Read more.

Officials at MIT and UMass Amherst said today that high-school students shouldn't worry about their admission status if their high schools discipline them for walking out of class in anti-gun protests.

UMass Amherst students gathered on the plaza at the base of the high rises of Southwest quad last night for the traditional post-sportsball riot, which this year resulted in at least 12 people being taken to the hospital and six being arrested after campus, Amherst and State Police in riot gear and on horseback dispersed the crowd with the aid of at least one shot of PepperBall, the school reports. Read more.

Fortunately for students at UMass Amherst, there are alternatives to Philadelphia Cream Cheese 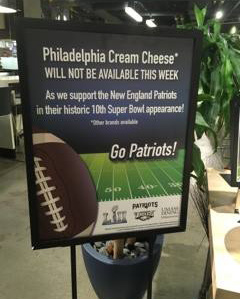 These signs went up this week in the cafeterias at UMass Amherst, which has the best food in the country and where the motto this week is "You Were. You Are. You Can't Get Any Philly Cream Cheese This Week."

Maureen Rogers reviews the dismal attendance at Gillette Stadium for UMass football games - and the $5 million the state school is paying in rent:

What's wrong with having a nice little local program? Play the other New England state universities, and schools like Holy Cross? Why not keep it on campus, where students can attend more easily? What's wrong with 13,000 people watching a football game on a nice Indian Summer day? Does it have to be 90,000 diehards screaming for blood?

A student at UMass Amherst is making a federal case out of the way the school promptly expelled him as part of a new crackdown on rioting after sporting events.

In a lawsuit filed yesterday in US District Court in Boston, Cullen Roe charges the expulsion violates his 14th Amendment right to due process because officials ordered him out without even the disciplinary hearing he says is required by the school conduct code.

Anna B rips into Tracy Jan's article in the Globe on the suckitude of UMass Amherst: