Everett announced a 30-day shutdown for its schools, while Arlington, Bedford, Belmont, Burlington, Lexington and Winchester said they are closing their schools for at least two weeks. Read more.

I'm looking for a restaurant with German food, things like wiener schnitzel and interesting sausages. A restaurant rather than a bar or beer garden, something like the now-closed Jacob Wirth. Thanks.

WFXT reports National Grid has told that worker who blared his horn and yelled at a Belmont woman with Warren, pro-LGBTQ and national-park stickers on her car that his services are no longer needed.

WFXT has today's moment of sunshine from Belmont, where a National Grid worker who supports Dear Leader spotted a car bedecked with evil Elizabeth Warren, pro-LGBTQ and national-parks stickers and decided it made perfect sense to sidle up behind it in his work van and lay on his horn and when the owner of the car came out to see what the fuss was about cranked up the Rush Limbaugh on his radio and, after pretending to play dumb as he sat there in his Trump 2020 hat, decided to give the woman a piece of his big ol' mind.

And now he has to sit through lectures from his bosses about how that's not the best idea.

Transit Police report a man, about 21, was hit on the tracks by a train at the Brighton Street crossing and was killed, around 6:20 a.m.

Blogging Belmont reports on the intimidation campaign against one of this year's candidates for selectman.

One of these days, Keolis will learn to really communicate with riders, maybe

Mark A. Grasso was heading into town on Train 414 on the Fitchburg Line, which pulled into Belmont shortly after noon - and then just sat there. He reports: Read more.

A federal judge yesterday dismissed a lawsuit by the company behind Craft Beer Cellar outlets against an online site that lets people post reviews of their workplaces, because of a federal law that protects sites against suits over comments made on sites by third parties. Read more.

The turkeys were forced to cross the narrow bridge single file

The company behind Craft Beer Cellar outlets is making a federal case out of negative reviews on Glassdoor.com, a site that lets people review the companies they work for. Read more.

Jiaan Hyland watched firefighters from Belmont, Cambridge and Watertown battle what turned into a three-alarm fire tonight at 52 Grove St.

Joe Morrissey reports the fire started in the basement.

There's probably a good reason why the pedestrian bridge over Rte. 2 at the Arlington/Belmont line is packed with all the old Christmas trees that David Weininger spotted this morning.

To Every Cloud a Silver Lining: Tackling Climate Change in 2016

Prevailing sentiment in progressive haunts is “2016, don’t let the door hit you on the way out.” Between a stressful election season, acts of terror, and the crisis in Syria, many of us will be glad to see the calendar page turn on Sunday night. Still, to every cloud there is a silver lining, and at least when it comes to tackling climate change in the US, Massachusetts was a bright spot amidst the clouds of 2016.

Major delays on the Fitchburg Line again this morning, this time due to a car/train collision at Brighton Street in Belmont. NECN reports the car was stopped on the tracks and the driver was trying to get three children out when the train hit.

Sorry, but close only counts in horseshoes 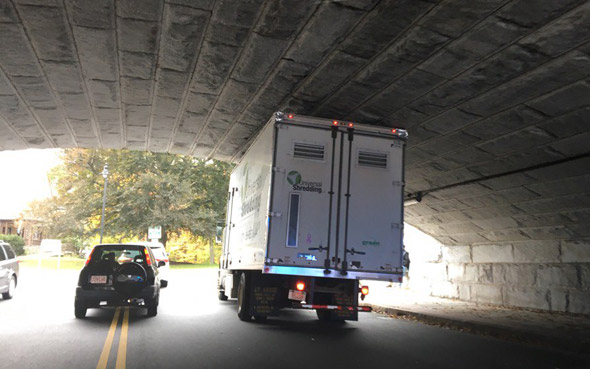 Nasty Tasha came across a truck that almost made it out of the tunnel in Belmont Center, but instead wound up nice and storrowed early this afternoon.

Belmont Moose hit by car and is euthanized

BPD&BFD respond to car on a pole at Hittinger st. No injuries.

The Supreme Judicial Court today upheld a Belmont man's OUI conviction that came about due to an anonymous 911 about a swerving car on Memorial Drive by a state trooper who didn't actually see the swerving.

But in upholding John DePiero's conviction for a 2011 arrest, the state's highest court broke with the US Supreme Court, which ruled in 2014 that anonymous 911 calls are inherently legitimate as tips that can lead to a traffic stop these days because false 911 calls can be tracked. The SJC ruled that, in Massachusetts at least, unless 911 callers are first informed their calls can be tracked, an anonymous caller with malice on his mind might still make that false report if he was unaware he could be tracked. Read more. 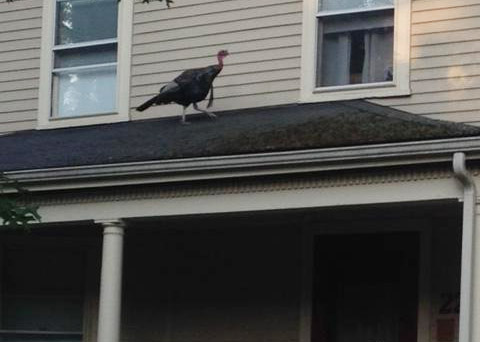 Tim shows us a member of an elite turkey shock troop headed straight for a second-floor window at his parents' home in Belmont yesterday.

The Library of the Royal Irish Academy wants to identify the people in the photograph below. Please contact the Library if you recognize any of the subjects. The Library can be reached via Twitter @Library_RIA, or by email at www.ria.ie/library/contact, citing "8 May Photo Query Tweet."

If more information regarding the location, subjects, time, et cetera, of the photograph become available, I will update this post.