It's Harvard, what do you expect? The Crimson reports members of Congress, including at least one who went to school in Cambridge, are pushing a bill, basically aimed at Harvard, that would prevent colleges from punishing students who join single-sex clubs. Read more.

Berkeley not very genial with Harvard, MIT over biotech patents

The Harvard Crimson has the details in the dispute over who discovered a particular gene-changing technique first; Berkeley is using words like "pattern of deception" and "cherry-picked data" in a complaint filed with the US Patent and Trademark Office. Harvard and MIT volleys back with words like "baseless."

A federal judge yesterday sentenced Nicholas Zuckerman to 15 months in prison and three years of probation for threatening to travel to Harvard and blow things up and shoot participants in a commencement event for black students, the US Attorney's office reports. Read more.

Matthew S. Schwartz of NPR reports on a lawsuit against the Ol' Crimson brought by one Tamara Lanier. Per Lanier "Papa Renty" is the patriarch of her family. And in a lawsuit filed Wednesday, she says Harvard is using those photos without permission — and in so doing, profiting from photos taken by a racist professor determined to prove the inferiority of black people."

A federal complaint filed on behalf of a Harvard College student is shedding light on how the school handles disability rights and accommodations for Harvard students with disabilities. 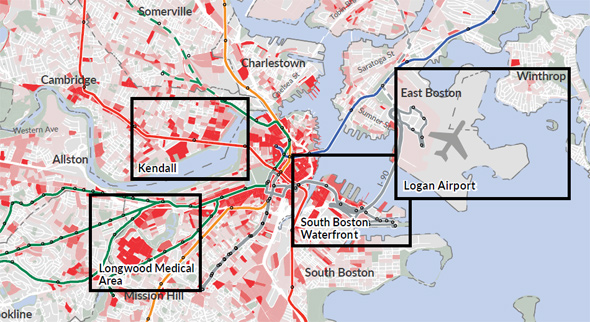 Five elected officials who represent Allston/Brighton want the state to include the area around the Allston turnpike exit as a "priority place" in its 2040 transportation plans because development in and near the old Beacon Park rail yard will otherwise mean "unacceptable congestion." Read more.

The BPDA board yesterday approved Harvard's request to ditch all the zoning on 14 acres it owns in Allston so the university can begin figuring out exactly how it wants to build out an innovation district of its own that would include 900,000 total square feet of office, lab and hotel space and new residences. Read more.

Allston to MassDOT: Give us Transit Not Traffic 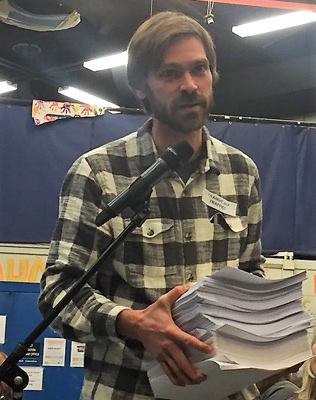 Allston park to get major redo

Mayor Walsh and Harvard President Drew Faust get their ceremonial shovels out today to officially launch a $6.5-million upgrade of Smith Field that will include a street-hockey rink, a splash pond, new walking paths, an amphitheater for public performances and upgrades to the existing playground and playing fields.

The ceremony starts at 4 p.m. at the park off Western Avenue.

Nadya Okamoto, a Harvard freshman who started a group to help supply women with menstrual supplies, has filed papers with state elections officials to run for a seat on the Cambridge city council. Read more.

The Crimson reports two Iranian sisters, one headed to do mathematical work, the other to study philosophy, were barred from a flight from London on Sunday despite having visas. They were denied seats on three other flights as well. The two have a sister who is already in Cambridge, working at the Harvard-Smithsonian Center for Astrophysics.

A woman who graduated Harvard last year says the university violated a federal equal education law by not educating students about sexual assault and harassment - and by failing to protect her after she complained about the actions of a former boyfriend who also attended the school. Read more.

The Harvard Gazette reports researchers at Harvard, MIT and the Joslin Diabetes Center have successfully tested an implantable bundle containing human pancreas cells in mice and primates with type 1 diabetes.

Key to the research is alginate, a substance derived from seaweed that blocks the immune system from attacking the container for the new cells as "foreign" without the need for expensive and risky immune suppressing drugs. Read more.

Is new Brighton development too much?

In recent months, 427 units of housing have been proposed in a small Brighton neighborhood:

An inflamed colon on a chip

The Harvard Gazette reports researchers at Harvard's Wyss Institute for Biologically Inspired Engineering have developed "a model of human intestinal inflammation and bacterial overgrowth in a human-gut-on-a-chip" that should make it easier to figure out and develop possible remedies for such ailments as Crohn's disease and ulcerative colitis.

Co-star of Fever Pitch gets parade through Harvard Square

617 Images watched Jimmy Fallon in a chariot procession through Harvard Square before being honored by the Harvard Lampoon as "Emperor of Comedy."

Harvard is seeking BRA approval to tear down what it considers an inadequate auditorium on the Business School campus in Allston and replace it with a more elegant and larger structure able to "host global events and create a first-class learning environment." Read more.

Cambridge Day reports on Harvard's revised plans for the space.

The Crimson reports Harvard dished its new Allston science center will now consist of one large building rather than four smaller buildings, at a recent residents meeting, but declined to release any renderings or floor plans. Also, Harvard said the new building will focus on undergraduates - the plans shelved in 2008 kept them on the other side of the river.