Although as the Globe notes, they're probably Boston and New York investment types. 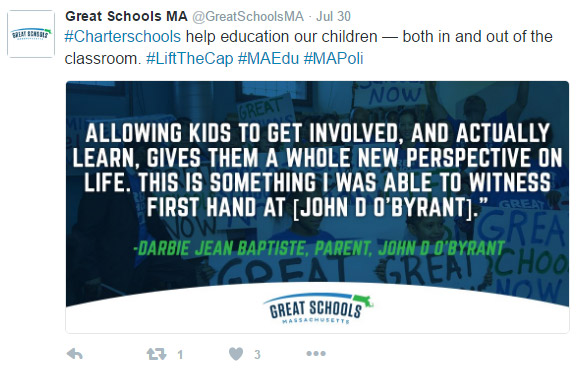 Heshan Weeramuni, an active supporter of Boston Public Schools, noticed this tweet by a group working to lift the cap on charter schools in Massachusetts that turns "education" into a verb and sings the praises of the O'Bryant - which people who actually live in Boston know is a BPS school, not a charter.

Oopsies: The Great Schools campaign took down their tweet this morning after Weeramuni posted a copy - just like Boston 2024 did last year.

In Opposition to O'Malley's and Jackson's Charter Position

* The following is an open letter (to councilors George, Wu, Flaherty, Pressley and Zakim) and will be shared with www.universalhub.com

I am writing to oppose Councilor O'Malley's and Councilor Jackson's proposal to stand against the charter expansion referendum in the State of Massachusetts. First, and most importantly, it is about our city's children.

In September, the Boston School Committee will debate whether to oppose a ballot question that would lift the state's cap on new charter schools. Read more.

The ballot battle over public-education funds this fall

Alternet and the Boston Institute for Nonprofit Journalism take a look at the forces behind a ballot question that would expand the number of charter schools in Massachusetts.

My First Boot Camp: Inside the Boston school that suspends kindergarteners

Well, or did until word got out. WBUR takes us inside UP Academy Holland in Dorchester - a tough-love school still owned by the city but no longer controlled by BPS, where wiggling in your seat brings discipline and they even have a room for kiddie solitary confinement for the really tough eggs.

The state this week approved plans to add 1,100 new charter-school seats in Boston.

The board of the state Department of Elementary and Secondary Education decided Tuesday to let Neighborhood House Charter School in Dorchester add 429 seats and expand to grades 9-12 - and to let the Brooke schools add 691 students and a high school. Read more.

WBUR reports on the 6-4 vote by the state education board to make Dorchester Collegiate Academy shut down due to low test scores and high attrition rates.

About 20 stunned parents in bright yellow shirts with the DCA logo stormed out after the vote, many in tears.

Bridge Boston Charter School has filed plans with the BRA to renovate an old health center at Warren and Townsend streets into a 400-student school across Townsend from Boston Latin Academy. Read more.

City plans meetings on single application for BPS, charter schools; not everybody happy

Mayor Walsh announced a series of meetings on his proposal to give parents a single system for applying for seats in both BPS and charter schools. Read more.

Jamaicaplainiac ponders the news that some high-priced lawyers are looking at a civil-rights lawsuit to force the state to end its cap on charter schools, decides to look at some enrollment and test numbers in Boston and comes to somewhat different conclusions:

If the contention of the potential lawsuit is that charter schools are so much better than district schools that it’s a civil rights violation to cap the number of charters, well, I just don’t see it.

Indeed, some of those ELL and students with disabilities numbers are so suspiciously low that if I were running one of these schools, I would get pretty nervous when people start bringing up civil rights violations.

And I have to wonder not only why they’re fighting to expand charter schools, but why some of these schools haven’t been closed down.

What do you get when you subtract 1,001,279 from 1,041,640? If you answered *38,000 and change,* or *the margin by which the new governor of Massachusetts, Charles Duane Baker, Jr., swept into office,* you would be technically right. But these are bold new days and we are thinking big, bold thoughts, which means that the correct answer is *a bold mandate to replace all of our old failed and failing schools with Excellent New Schools.*

Parent Imperfect reports how a Wellesley state rep managed to get a bill drafted and passed in just 24 hours to remove the cap on charter-school expansion in Massachusetts. No public hearings, etc., because that would just be so boring, or something.

A reasonable person might ask if Rep. Peisch’s alleged personal involvement with charter and other educational reform organizations might create a conflict of interest, or at least a conflict of conscience for her on this issue. One might wonder such things, but, in Massachusetts, such questions often go unanswered.

~75 local parents, teachers, communities members and many of their children showed up at the steps of the State House this afternoon to protest the proposed 2014/2015 BPS budget cuts and to ask the state to consider holding the lifting the charter cap until the state finds away to make sure both school systems are fully funded.

Several parent and student organizers spoke to a lively crowd, with some excellent chants led by public and charter high school students.

Parent Imperfect explains why he doesn't think much of the "third way" proposal by state Sen. Sonia Chang-Diaz and state Rep. Russell Holmes to lift the cap on charter schools.

Acting School Superintendent John McDonough announced today that the state has chosen two private education groups to take over control of the Holland and Dever schools in Dorchester, which the state says BPS has been unable to get into shape and which are rated as low as you can get under the scoring system used by the state to judge schools.

Election roundup: Charter schools, District 8 forum and a look back at America's most corrupt politician

The Globe reports the mayoral forum sponsored by the Boston Teachers Union was just what you'd expect: Candidates opposed to expanding the cap on charter schools (Consalvo, Ross, Yancey and Arroyo) got a much warmer reception than those who didn't (Connolly, Walsh, Walczak and Barros, with the strongest charter supporter of them all - Conley - not present). Golar Richie continued her position of not really taking a position on the issue.

The Globe reports a pro-charter group plans to spend up to $750,000 for ads and door knocking for John Connolly (Stand for Children's release on its endorsement is attached below).