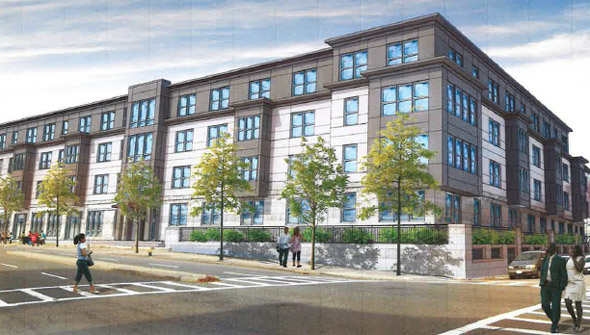 Two non-profit groups have filed plans with the BRA to replace the old Cote Ford dealership at Cummins Highway and Regis Road with a 76 apartments - 52 in an apartment building and 24 in three townhouse buildings.

The Planning Office for Urban Affairs and Caribbean Integration Community Development say the proposed Cote Village, next to the planned Cummins Highway stop on the Fairmount Line, would remove a neighborhood blight and provide much needed affordable housing in a transit-oriented development. Read more.

Teen shot in the hand near Mattapan Square; car also shot up

Around 9 p.m. on Rexford Street near Cummins Highway.

No bottle service at Mattapan Square club for now

Rather than risk rejection after the mayor's office opposed them, the owners of Macumba Latina on River Street have withdrawn their request to offer bottle service at several VIP tables.

The owners made their pitch at a Boston Licensing Board last week - at which the mayor's office opposed the proposal, in part because they had yet to talk to any residents' groups.

In the left side, shortly before 10 p.m. on Thursday outside 1633 Blue Hill Ave.

Mattapan hot-dog place to be grilled on proposal to stay open until 3 a.m.

Simco's, 1509 Blue Hill Ave. in Mattapan Square, goes before the Boston Licensing Board on Wednesday for permission to extend its closing time from 1 a.m. to 3 a.m.

The venerable hot-dog stand, which years ago had later hours, got a one-day suspension last fall when a police lieutenant found it open at 1:45 a.m. one August night.

The board's hearings start at 10 a.m. in its eighth-floor hearing room in City Hall.

Two teens who robbed two women - and pistol whipped one of them - near Ashmont station early this morning were arrested not long after when police activated the tracking app on one of the phones.

Simco's, 1509 Blue Hill Ave., will have to serve a one-day suspension after a police lieutenant found it open 45 minutes past its licensed 1 a.m. closing time one night in August.

The Boston Licensing Board ordered the punishment after Lt. Det. Eric Eversley testified at a Tuesday hearing that when he drove past the venerable stand around 1:45 a.m. on Aug. 9, he found the place humming: Not only were there eight to ten patrons waiting in line, there were cars double parked out front and there was even a guy selling CDs on the sidewalk.

Simco's is only licensed to stay open until 1 a.m.

Board: Mattapan club not to blame for melee that brought cops from all over

The Boston Licensing Board said Macumba Latina was not to blame for the aftermath of a fight that brought cops from three Boston precincts and State Police to River Street in Mattapan Square on April 28.

Police had cited the club for "a large fight, patron on patron," but the board ruled "no violation."

The club said much of the confusion that night was caused by police showing up en masse at closing time and blocking the narrow River Street with their cruisers just as patrons were leaving.

Did large police response to a fight at a Mattapan club help quiet things down or make them worse?

Police and the owners of Macumba Latina, 477 River St., agree that around 1:45 a.m. on April 28, a punch was thrown, a man was bloodied and scores of club goers emptied into the street.

But other than that, the two sides painted dramatically different versions of the incident at a Boston Licensing Hearing this morning, called to consider a police citation for "a large fight, patron on patron."

Police said it took large numbers of officers from three different Boston districts and State Police to quell what they said was a fight that kept starting up despite the initial presence of two BPD officers right outside the club.

Mattapan man admits stabbing relative to death in a fight

Derrick Bullock, 42, was sentenced to 12 years in prison today after admitting he plunged a knife into Curtis Cox's neck during a fight on Blue Hill Avenue on July 31, 2012, the Suffolk County District Attorney's office reports.

Prosecutors had originally charged Bullock with second-degree murder, but agreed to reduce the charge "in light of the circumstances of the fatal altercation and the wishes of Cox’s family members," the DA's office says.

Bright lights of the big city

Somebody runs up to livery car in Mattapan Square, stabs occupant

Around 5:30 p.m. at Blue Hill Avenue and River St. The victim in the black Cadillac is expected to survive; the stabber may have also been injured, possibly by getting dragged by the car. He's described as 17, thin, with an Afro.

City to Dorchester Chinese restaurant: Are you kidding, you want later hours?

City officials are opposing a request by a Blue Hill Avenue Chinese take-out place to extend its closing time from 1:30 a.m. to 2 a.m. weeknights and 2:30 a.m. on weekends.

If anything, Yong Hon, 772 Blue Hill Ave., should be scaling back its hours, representatives of the mayor's office and city councilors Charles Yancey and Steve Murphy told the Boston Licensing Board.

They said Blue Hill Avenue has a problem with people congregating there after the bars close and noted that even Simco now only stays open until 1 a.m.

Police are looking for two men who fired a gun at a car as it was passing 439 River St. around 8:25 p.m. The driver was not injured.

According to a Boston Police report, a semi-automatic weapon was used to shoot up the area around 7 Rockdale St. around 8:40 p.m. on Monday. According to one report, two women got into a gunfight, but failed to hit anybody.

MBTA Transit Police say a 17-year-old was robbed at Mattapan station around 9 a.m. on Sunday, Aug. 12, by a guy who pointed to a gun in his sweatshirt pocket and threatened to use it if the teen contacted police.

A Mattapan man who allegedly stabbed his nephew inside the Mattapan House of Pizza Tuesday night will be charged with murder now that his relative has died, Boston Police and the Suffolk County District Attorney's office report.