The tide rolled in and then just kept coming 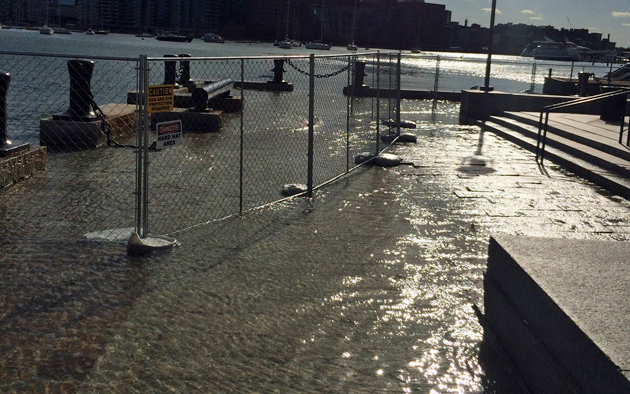 Adam Castiglioni took a walk down to Long Wharf today - just not all the way to the end, since it was covered by water in a king tiday. 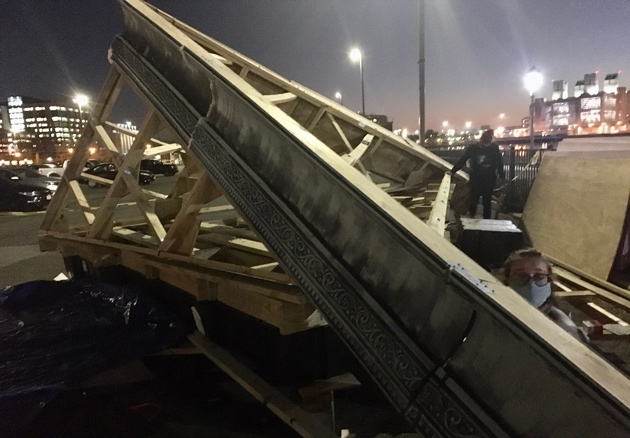 The Fort Pointer captured artist Zy Baer at work on what will soon be Fort Point Channel's latest art installation, Polarity, which will show a future in which the channel floods and rises until only the upper floor and copper cornice of a building remains above water. Read more.

Not a cloud in the sky, but Long Wharf still sees flooding 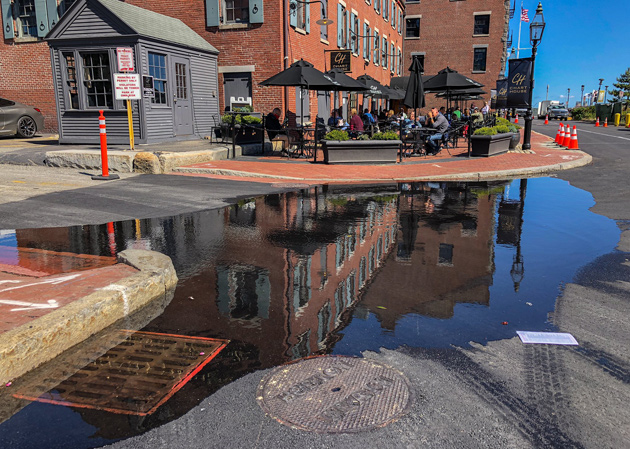 Shortly after high tide, around 1:15 this afternoon, Jonathan Berk photographed seawater "coming up through the storm drain on a perfectly sunny day" way back on Long Wharf, by the Chart House. 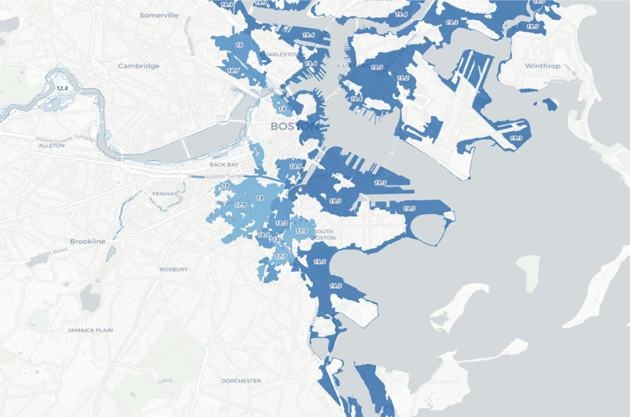 Boston areas that could see sea water in the streets in coming decades.

City officials are looking at a possible zoning overlay that would require homeowners looking at extensive renovations consider how to deal with seawater flooding that will come as sea levels continue to rise and storms intensify, and they've developed some possible guidelines for retrofitting those most Boston of dwelling units: Triple deckers. Read more.

Can Boston out-Canute the tides as sea levels keep rising?

The Washington Post, which has lots of ex-Bostonian staffers these days, takes a long look at what Boston's trying to do to stave off rising sea levels now that we've apparently rejected plans to build a giant dam around the harbor. Naturally, while Seaport buildings lay in "aqua fences" to keep themselves dry, "there are no sea walls where most of Boston’s poorest residents live," although it does note the city's planning for a new seawall along Day Boulevard and a re-do of Moakley Park to turn it into a giant sponge during really high tides.

Climate protesters arrested when they refuse to leave the State House

MassLive.com reports the protesters wouldn't move from Gov. Baker's office and were arrested on trespassing charges. 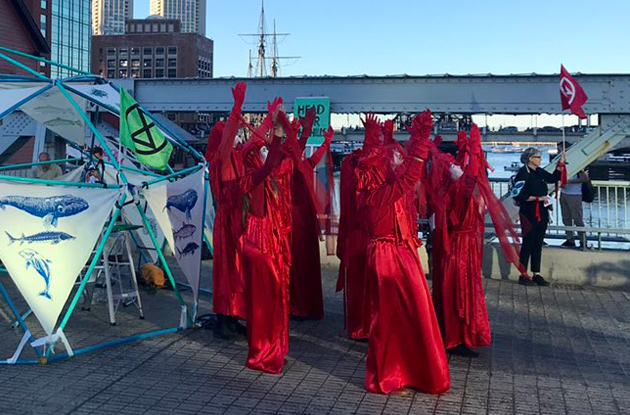 Extinction Rebellion shut the Congress Street Bridge at rush hour this afternoon in a protest over climate change. Among the protesters: Women dressed as lobsters (photo by Chris Walton). Read more. 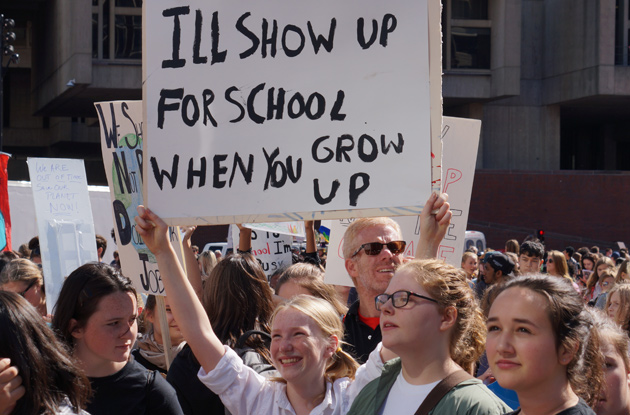 Thousands of high-school students and more than a few adults from across the Boston area jammed City Hall Plaza today as part of global climate-strike protests. Read more.

Bloomberg BusinessWeek takes a look at the booming Seaport at sea level at a time when sea levels are rising and reports that the newly opened Martin's Park, in addition to serving as a memorial playground for Martin Richard, is also the first in what could be a series of raised surfaces aimed at protecting the area from climate-change-induced flooding.

City officials have proposed spending up to $1 billion on a series of berms, seawalls, raised surfaces and dunes to protect the Seaport and other vulnerable parts of South Boston.

Yes, our weird weather could be due to climate change, meteorologist says

On the whole, meteorologists just hate to link any specific weather pattern over a short period to climate change. But Pete Bouchard says it's time to face facts: While may be impossible to say the specific wet weather we've been seeing over the past few weeks is due to climate change, the fact that we're seeing more and more unusual weather patterns that last long periods of time is: Read more.

Climate-change die-in at Prudential Center; shoppers just move to the side and keep going 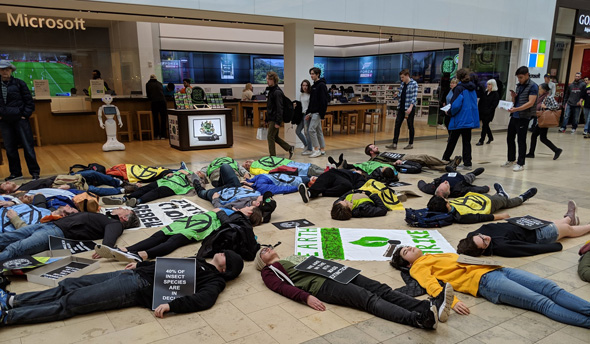 Eric Maki and a robot at the Microsoft Store were among the few stopped to watch a climate-change die-in at the Prudential Center mall this afternoon:

Nearby consumers are unfazed.

As he does pretty much every year, City Councilor Matt O'Malley (West Roxbury, Jamaica Plain) has formally asked the city to begin a pilot program to collect people's discarded coffee grounds and other foods to turn into compost. But this year is different, because the costs of dealing with recyclable materials is going through the roof, O'Malley says. Read more. 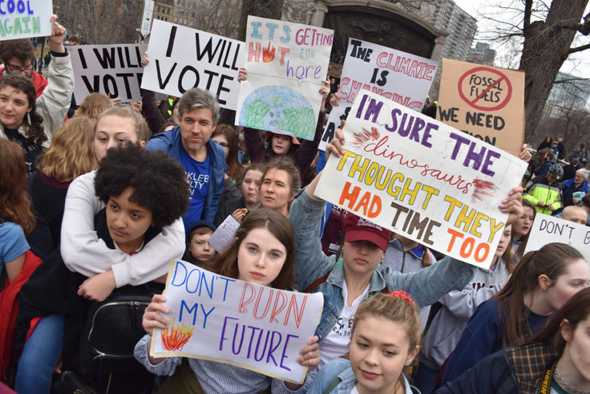 Reuters reports the Supreme Court has rejected an appeal from ExxonMobil over a Massachusetts court ruling that it hand over documents related to the company's efforts to not just hide evidence of climate change but to discredit the science involved. Read more.

Commonwealth Magazine takes a look at a possible market-based way to reduce carbon emissions - by basically driving up the cost of auto fuels. 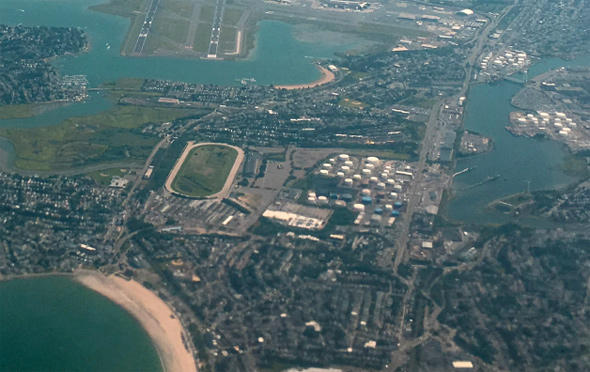 The Dorchester Reporter reports that in addition to the usual concerns about traffic and rootless condo dwellers, opponents of developer's plan to put 96 condos on the very tip of Port Norfolk have a new issue: Ever higher tides caused by climate change. A BPDA planner told a recent meeting that "over the next 50 years or so, the 2018 village will shrink to a sliver in the center as tidal waters eat away at the edges."

City says it can flood-proof South Boston as seas rise

The city today released plans for keeping rising seas from reclaiming all the parts of South Boston that sit on fill - which is much of the neighborhood. Read more.

Hundreds rally for the earth, jobs and immigrants in East Boston 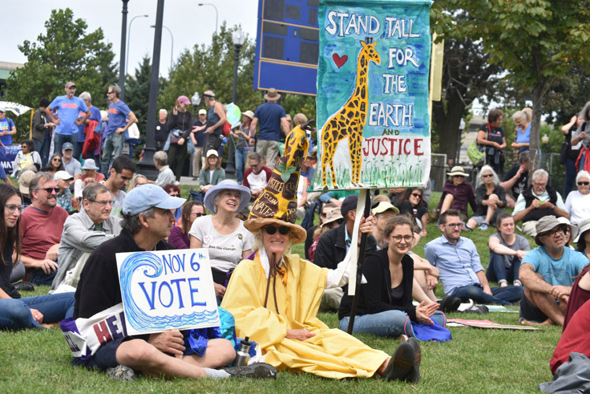