GBH and WBUR, which still likes its W, will team up to provide local news for an NPR podcast about, well, local news. Read more.

WBUR lays off 29, ends Only a Game, as recession crashes revenues

Dan Kennedy gets the memo - also, the station is losing four of its top exec and has frozen salaries for the coming year.

'Mature Poets Steal': 'Evening of Inspired Leaders' is a MassPoetry fundraiser happening on Monday, youse all.

As the old saying goes: You can take the girl out of Boston...but you can't take the Boston out of the girl who is taking a trip outside Boston. Not too long ago I received an email from MassPoetry about its Evening of Inspired Leaders fundraiser event (LMAO @ MASSPOETRY ASKING ME FOR MONEY YEAH AIGHT) happening this Monday, March 25 at 7pm at the Huntington Theatre Company.

WBUR self-reports the departure of Charlie Kravetz as general manager. The station reports the decision was one of those mutual time-to-go-separate-ways things and that while his formal resignation becomes effective June 30, he is no longer involved in day-to-day operations - and he did not attend the staff meeting at which the news was announced. Twitter feed from the meeting.

Boston City Council to unionized Boston journalists: We've got your back

The City Council today approved a resolution in support of journalists at the Globe and WBUR who are battling management over workplace conditions and pay and benefits. Read more.

WBUR self-reports on the overwhelming vote.

Meanwhile, over at the Globe, relations between the newsroom union and John Henry are getting a bit heated over contract talks, Dan Kennedy reports.

Organizers hope to form a local affiliated with SAG-AFTRA.

WBUR host to move from local to national issues

WBUR says it's chosen McSweeney's to create a pilot show that could replace the Car Talk reruns the station now airs.

The show would be hosted by Chris Monk of Arlington, who now runs McSweeney's Internet Tendency and who obviously has the Massachusetts roots to replace a show famous for its Boston accent. Who else but a Bay Stater could have come up with this list?

Tom Ashbrook wants to get back into broadcasting; Jim Braude tells rival station to lighten up

WGBH's Emily Rooney interviewed fired WBUR/NPR host Tom Ashbrook, will air it on her media show on Channel 2 tonight, but tells Eagan and Braude that Ashbrook wants to get back into broadcasting, maybe starting with a podcast, so she doesn't think he'll sue 'BUR for firing him.

Braude, meanwhile, acknowledged that, yes, Boston has an NPR station besides WGBH, but says that other station needs to learn what a joke is. Read more.

BU Today reports the NPR station found no evidence that the now former On Point host sexually harassed anybody but that he was canned "after an independent review verified claims that he had created an abusive work environment."

WBUR self reports on Tom Ashbrook, the "On Point" host put on leave last week.

WBUR reports on its own Tom Ashbrook, host of the nationally distributed "On Point" talk show. Boston University, which owns the station, and station management would not detail the allegations.

Current reports WBUR will use a $300,000, three-year grant from the Barr Foundation to hire three investigative reporters and that it hopes to team up with other investigative units, including the Globe Spotlight Team, Pro Publica and the New England Center for Investigative Reporting. 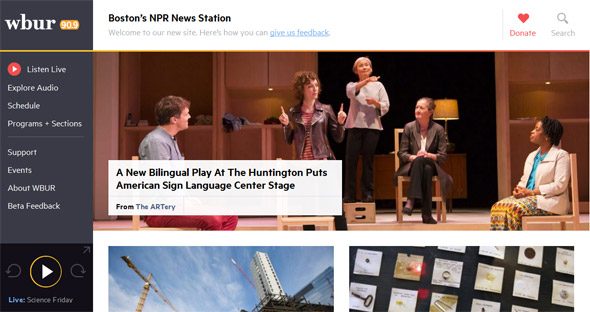 WBUR went live today with an all-new look for its Web site featuring large photos and type on its stories and an easier way to listen to the station online - just click the little button in the left-hand corner (or the bar at the bottom of the mobile-friendly mobile version).

WBUR jumps on the politics bandwagon

WBUR today launched Politicker, headed up by former Globie and Deval Patrick aide Richard Chacon - who of late had been in charge of 'BUR's news strategy:

WBUR Politicker will cover New England’s races the WBUR way, with deep and serious treatment of issues, sound-rich feature reports from the campaign trail, plenty of perspective and context from our signature analysts, and loads of data.

It's long past time for men to stop being so hung up, WBUR advises in its report on a seminal study of the topic, if you get our thrust.

Mornings with the mayor

Hand-lettered farewell on the Red Line. Photo by Dan Meade.

Almost 10 years ago, I took a position as a newscast writer for WBUR. Mine was the early morning shift, and my job was to arrive at 4 in the morning and start putting together the local news portion of Morning Edition. The other part of my job was to call some of the people about whom I was writing - local lawmakers, state officials, an occasional bereaved relative, and get "tape" (what most non-journalists call soundbites). I'd often wince while the phone rang, imagining it jangling in someone's bedroom.

One of the Car Talk guys has died

Tom (c) and Ray Magliozzi at Honk in Somerville in 2007. Photo by Greg Cook.

WBUR reports that Tom Magliozzi, co-host of Car Talk with his brother Ray, has died at 77. Greg Cook reports the cause was complications of Alzheimer's.

In a statement, the station says:

No one could have imagined, when two native Cambridge guys came into the WBUR studios in 1977 and started taking listeners’ calls about cars, that they would change public radio forever. But in fact that is exactly what happened.