Acting Mayor Kim Janey today cited Boston's unique vulnerability to rising sea levels in announcing she was withdrawing a waterfront plan developed by then mayor Marty Walsh under which the Chiofaro family would have finally gotten to build a skyscraper next to the New England Aquarium, long blocked because of the family patriarch's unceasing feud with Tom Menino, and which would have let developers replace the James Hook seafood trailer and the rest of its fire-ravaged pier with a hotel. Read more. 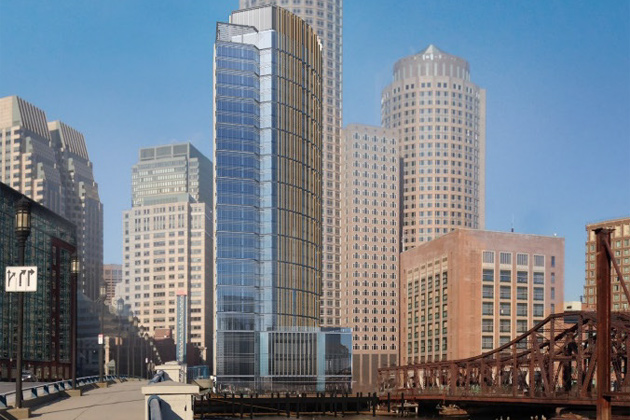 Rendering by Elkus Manfredi of the view from next to the Barking Crab.

A development team last week filed plans for a 25-story, 357-room hotel with 9,000 square feet of room for the James Hook seafood concern on what is now Hook's almost half acre of land on Atlantic Avenue between the Moakley Bridge and what's left of the Northern Avenue Bridge. Read more.

The Globe reports the family owners of James Hook & Co. are looking to replace their current seaside digs on Atlantic Avenue with a 22-story residential tower - and space for them to keep selling lobsters and other seafood in a new restaurant.

The Herald reports on parking concerns from the Municipal Harbor Plan Advisory Committee.

Lobster place wants to turn itself into a building with elevators

NorthEndWaterfront.com reports on a recent BRA planning meeting at which an architect for the Hook family discussed how it would like to build some sort of tower on the current property - with the lobster place staying in the first floor.

James Hook site up for sale

The skeptics were right, although the Hook family wants to lease space in whatever gets built:

What a tail: James Hook re-opens at old location

BostonZest gets the scoop: They re-open today.

Why they were closed.