Some trolleys are late in broken-door spate

The MBTA is reporting delays of up to 20 minutes on the C Line inbound because of a trolley with a door problem.

The MBTA is blaming a "power problem" at Park Street for delays on the Green Line. Shortly before 8 a.m., Jed reported:

At 8:25, he shows us how passengers got from the trolley to the station: Read more.

C Line is at a standstill; one trolley might need a ride to the landfill

The MBTA reports delays of up to 15 minutes on the C Line due to "a disabled train with a mechanical problem" at Dean Road.

The T, which plans to run shuttle buses between Kenmore and Cleveland Circle on the C Line and Kenmore and Fenway on the Riverside line for the rest of the night following this morning's derailment, says it plans to resume regular service on the two Green Line branches first thing Sunday morning.

But are you surprised? The Green Line riders lost whatever chance they might have had when, naturally, their train was taken out of service at Kenmore.

At the end of the C Line, things were far from fine 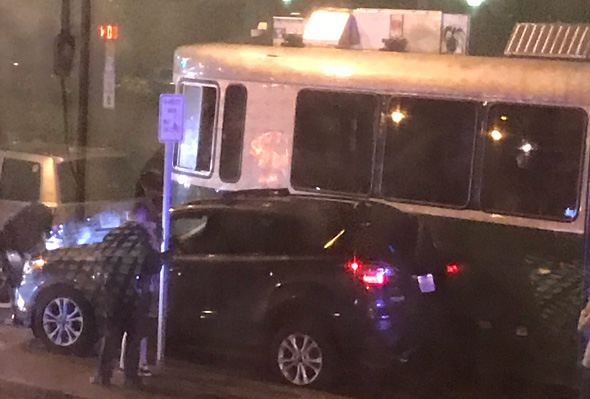 Danielle Jones shows us some of the carnage in Cleveland Circle where a trolley and several cars had a rather sharp disagreement over who should go where shortly before 8 p.m. Read more. 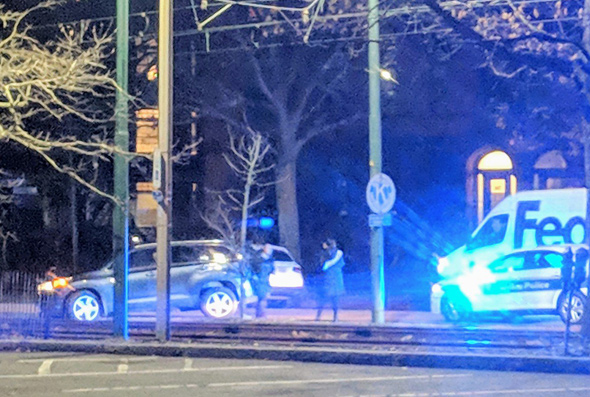 Henry Wong shows us the SUV whose driver somehow managed to get the vehicle's wheels ensnared on the inbound tracks of the C Line near Englewood Avenue sometime after 6:30 p.m. The T reports it had to stop trains at Coolidge Corner and bring in some buses to get riders between there and Cleveland Circle.

C Line is at a halt; cab on tracks at fault

There's probably a good reason a Bay State Taxi cab wound up on the Green Line tracks on Beacon Street near Coolidge Corner, as Jason Kashdan shows us. Whatever the reason, the line is now dead.

No Beacon of hope; a C trolley decided to mope

The MBTA reports delays on the Green Line outbound along Beacon Street due to a trolley that gave up the ghost.

Things are not fine at end of C Line

Green Line workers are currently trying to haul away a dead trolley at Cleveland Circle. Their counterparts on the Red Line are doing the same thing with a dead train at Porter Square. Delays abound.

UPDATE, 3:30 p.m. The power problems persist and are now affecting the Riverside line, too.

The MBTA reports "minor" delays on the C Line due to yet another unspecified power problem. Robinec helps define "minor":

I've been on the C line for more than 30 minutes now and we’re still not even underground.

Green Line power off once more; getting somewhere again a chore

A deceased trolley at North Station is causing "minor" delays for the ride to Lechmere, the MBTA reports.

C Line not so fleet; dead train at Washington Street

"Moderate" delays due to the froze-up trolley at Washington Street, the MBTA says.

MassDOT announced today that it's installing specialized traffic signal systems along Beacon Street in Brookline, and Comm. Ave. and Huntington Ave. in Boston that will switch to green lights for approaching trolleys. Mass. Ave. in Cambridge will get similar treatment for buses. Read more.

Transit Police report arresting a Canton man for "conducting himself in a lewd manner" on a C Line trolley as it approached Coolidge Corner around 9:30 p.m. yesterday.

NBC Boston reports a trolley derailed at the Cleveland Circle yard and Beacon Street around 7:20 a.m. No injuries, no effect on service.

Turkeys take on T and win - in Brookline, of course

Shortly before 5 p.m., as Katrina Demulling shows us, service halted on the C inbound due to a pair of turkeys that refused to yield the tracks to a trolley.

The T ran fine in the snow; it's today the trains won't go

The T says service was pretty durn good on the four subway lines thanks to all the investments in things like new third rails and plows and dispatch centers.

So far this morning, the T has reported Red Line problems that include dead trains at South Station and near Ashmont, signal and switch problems on the Braintree branch and at Park Street. Green Line trolleys ran even slower than usual on the C line.

Dead trolley at Hynes causing problems on B, C and D lines

Just "minor" delays on the Green Line so far, the T reports.