State starts telling some freelancers it wants its pandemic money back

WBZ Newsradio reports a year after the feds approved money for unemployment for people who normally wouldn't qualify - gig workers and freelancers - the state Office of Labor and Workforce Development is now trying to claw some of that money back, demanding up to $30,000 in repayments from some people.

Some freelancers said they resorted to self-medicating to deal with the stress of unexpectedly owing thousands, or had even become suicidal.

WGBH reports on a unionization effort among workers at Pavement Coffeehouse. If successful, they would be the first local coffeehouse workers in a union.

Live Boston reports on an incident at Boston Children's Hospital last night that sent a worker to a nearby trauma center with serious injuries.

Drop in Boston unemployment towards end of 2020 masked the numbers of people who just gave up, report says

The BPDA says unemployment in Boston dropped from a peak of 16.1% in June to a still high 7.4% in December - but in a new report says there's an important caveat with that decrease: Read more.

Dan Kennedy reports that reporters at Stat, the Globe's medical and biotech Web site, have joined the Newspaper Guild.

Giant inflatable rats are so passe

WBUR reports a senior Baker aide accused teachers of trying to push old people and people with serious underlying conditions out of the way in their mad dash to get vaccinated now that the state is going to force all schools to return to in-class learning and the governor isn't having it. Read more.

Northeastern University announced today it's planning on fully re-opening its Boston campus for the fall semester, although students and staff will still need to keep those faces covered and maybe even come in for some Covid-19 testing. Read more.

CVS adds school workers to list of people who can get a Covid-19 shot in Massachusetts; state to follow suit

The move comes the morning after Pres. Biden said he was telling states to add school workers to the top of their priority lists, something Gov. Baker had steadfastly refused to do. Read more.

What's a plaintiff in this town have to do to get a judge with no connection to Harvard?

Last October, Stephen Brussard sued Harvard in federal court in Boston, alleging he was fired as a maintenance worker for blowing the whistle on managers having other employees work on their homes. Read more.

Boston University goes to 24-hour ventilation, finer filters and lots of fans to reduce coronavirus inside its buildings

Boston University advised faculty and staff today it's taking a number of steps to reduce the odds of any airborne Covid-19 infecting people who have to spend time in its buildings - including dorms - as the school re-opens. Read more.

Above the Law reports Boston-based Ropes & Gray recently told associates to remove TikTok from their phones - even their personal phones, if they use those to connect to the firm's e-mail and case systems. Seems the firm is concerned that the app could phone home with at least some of the contents of the phones - including potentially sensitive client information.

Workers at the Whole Foods stores on River Street and Alewife Parkway - including one who says she was fired from the River Street store on Friday - have filed what they hope will be a class-action discrimination suit against the chain over the issue of being sent home if they show up for work with masks reading "Black Lives Matter." Read more. 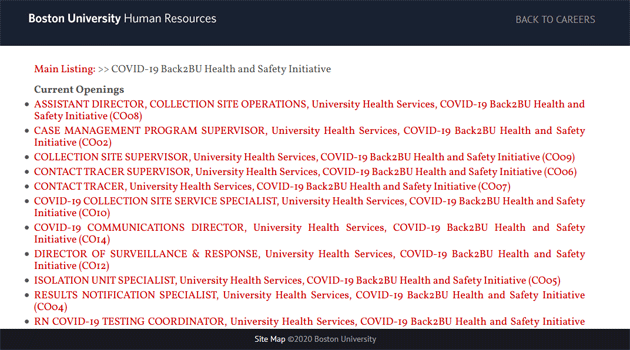 Some of the Covid-19 job postings at BU today.

Both Boston University and Northeastern are looking to hire nurses, lab technicians, medical assistants and contact tracers as part of their ambitious plans to test thousands of students, professors and staff every day come this fall. Read more.

Boston University President Robert Brown yesterday detailed more of the steps the school will be taking to tamp down any potential Covid-19 infections as school re-opens this fall. Among the steps: Required weekly Covid-19 tests for students who live on campus, their professors and any other BU employees who have regular contact with students - as well as for any students and employees who take public transit to and from the school. Read more.

Boston University President Robert Brown today told professors and staffers that uncertainties and new expenses caused by Covid-19 are forcing the school to stop contributions towards their retirement - in addition to instituting a previously announced salary freeze. Read more.

Mayor Walsh said today that office buildings in Boston will re-open a week later than in the state because the sheer potential crush of people going back to work here means the city needs to spend some extra time working with office-building owners and employers to ensure things are done safely. And he urged barbers, salon owners and religious leaders to think long and hard about whether they're really ready to re-open safely. Read more.

More than one million Massachusetts workers now on unemployment

WBUR reports on the latest figures, which include both people who have filed for traditional unemployment insurance and nearly a quarter-million people filing under the new "pandemic" insurance, which covers freelancers and gig workers - so we've now surpassed the numbers from the 2008-2009 recession.