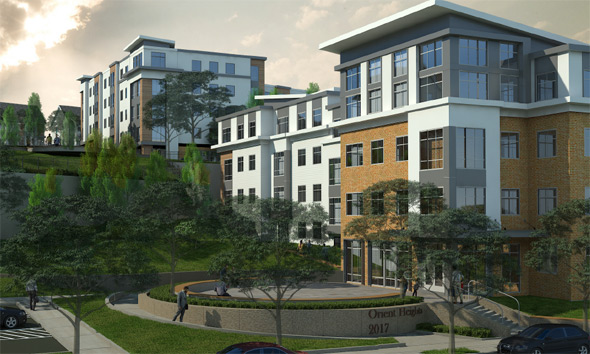 Rob McDougall reports the pedestrian was hit at Saratoga and Bennington streets. WCVB reports the driver stayed on scene after the 10:15 p.m. crash.

The Zoning Board of Appeals this week approved an Orient Height storeowner's proposal to put six condos atop his building after he reducing the total number of units - agreeing to eliminate planned three-bedroom units as a way to discourage somebody from buying a unit and renting it out to college students. Read more.

Trinity Orient Heights Limited Partnership has filed a letter of intent with the BRA to replace the 331-unit Orient Heights project on Vallar Road with 331 new low-income units and 42 market-rate apartments. Read more. 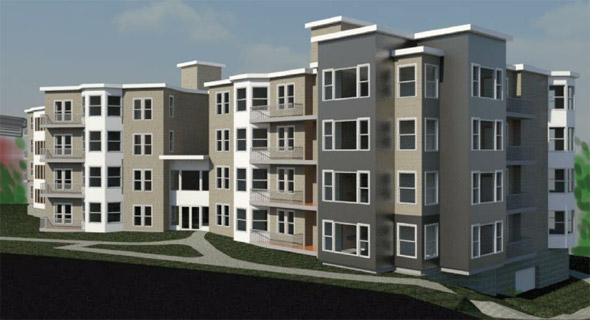 An auto-repair garage and an old apartment building at 1181 Bennington St. would be torn down and replaced by 44 two-bedroom residential units under a proposal now before the BRA. Read more.

Firefighters aim streams of water at fire on Saratoga. Photo by BFD.

A fire at 1051 Saratoga St. jumped to 1053 Saratoga before being brought under control, the Boston Fire Department reports.

Two firefighters were injured while battling the fire, reported at 12:53 a.m., the department says - one with heat exhaustion, one with a knee injury.

The Boston Fire Department reports a first-floor short circuit at 192 Leyden St. in Orient Heights did an estimated $200,000 in damage.

There were no injuries in the fire, reported around 1:20 p.m.

When Blue Line signals clock out, riders can only sigh, pout

The Blue Line is currently experiencing "severe delays" due to "a signal problem at Orient Heights."

Boston Police report officers assigned to check on the well being of a resident of 232 Brandywyne Dr. this afternoon found him dead, with several gunshot wounds. The man was in his 30s, police say.

Firefighters battling a brush fire off Bennington Street south of Orient Heights asked the T to shut down the Blue Line around 8:20 p.m., because the fire is close enough to the tracks they did not want to have to worry about what might happen should their streams of water hit the overhead electrical lines.

Damien Bundu, 23, is scheduled for arraignment today in East Boston District Court on a charge of aggravated assault and battery causing injury for an incident Dec. 8 at the Orient Heights Blue Line station.

The Boston Licensing Board today meted out an unusually stiff four-day suspension to Las Vegas, 964 Saratoga St., after police found bottles of gin, tequila, whiskey and vodka behind the counter of the former King Tacos, which is licensed only to sell beer and wine.

Owner Raul Santos and his manager said the bottles were purely decorative and were not used to serve customers. But at a hearing on Tuesday, neither could say where the bottles came from or even who had purchased them.

In the downstairs children's room.

Orient Heights to get mosquito spraying on Thursday

The Suffolk County Mosquito Control Project will use truck-mounted aerosol shpritzers to douse areas in the vicinity of Orient Avenue, Boardman Street, Andrew Road and Horace Street between dusk and 11:30 p.m. - or on Monday if the weather's not good.

The trucks will spray sumethrin:

The T is warning Blue Line passengers to expect "significant delays" this afternoon following a train slipping off the rails at Orient Heights.

MBTA spokesman Joe Pesaturo reports the train was moving from the Orient Heights train yard onto the main tracks around 2:40 p.m., so it wasn't carrying any passengers. The T has swapped in buses for trains between Suffolk Downs and Airport.

On track for Christmas on the Blue Line

The MBTA forwards this photo from the Blue Line repair facility in Orient Heights, where workers have made a Christmas tree out of a "bolster rack" of trucks used to hold the axles of Blue Line cars.

Firefighters gearing up to go in. Photo by Steven Klise.

Rob McDougall reports somebody was shot in the arm shortly before 7 p.m. The suspect was described as a black Hispanic male who fled in an older Civic last spotted headed toward Revere.

Andy Dost reports cops were in no mood to explain what was going on to bystanders:

Armed police have set up a tape perimeter at the Orient Heights stop. An officer told me when I asked, "Escaped zombies."

Boston Police report East Boston Variety, 3 Gladstone St., was held up around 6:45 this morning by a pack of knife-wielding robbers - one of whom gave the clerk a dollar, then pulled out a knife and yelled "Gimme the money!"

A second suspect was described as black male in his late teens early twenties, wearing a black hoodie with red lettering "Lazy But Talented" with the hood pulled up, black hat with 3 stickers visible on the brim, black pants, and black and white sneakers.