Does anyone have any idea why the manhole covers on Chestnut Hill Ave between Dean Rd and Rte 9 are smoking? My mother wants to know, thanks.

Somerville used to date-stamp its manhole covers, so that's how Chris Devers could tell how old this catch basin cover on Washington Street near McGrath Highway is.

They're the ones for you, New England, New England Telephone (even before the Nynex family) 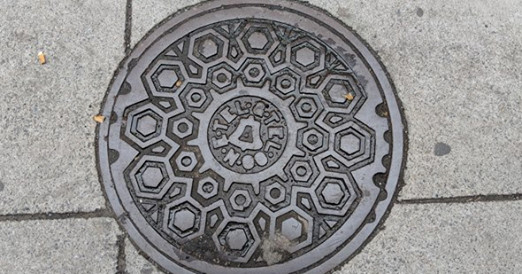 For the most part, Boston's history is best viewed when looking around or up. But sometimes, it pays to look down: Places such as downtown, the North End and Chinatown are filled with remnants of our commercial past, in the form of manhole covers. Read more.

Manhole bursts into flames in Brighton

Apparently a manhole outside 505 Boylston St., just past Clarendon, has been steaming all week, giving passersby a strong whiff of something awful. But today, it started steaming even more than usual, and firefighters, at first thinking they were dealing with a flaming manhole, doused the thing with liberal amounts of water. They summoned NStar, whose hole it is, to the scene; before an electrical crew could arrive, firefighters discovered the smoke was, in fact, steam.

Fire in the holes KOs parts of downtown, Back Bay

Channel 4 reports fires erupted from manholes this morning when an NStar cable failed a bit catastrophically.

NStar worker injured, but expected to survive the flash fire under Freeport Street. The Crimson reports on flaming manholes early this morning:

A fire started underground on the corner of Mass Ave and Dunster Street was visible through several manholes in the Square this morning. Harvard's Holyoke Center, Cambridge Savings Bank, Au Bon Pain, and other nearby institutions were evacuated, and automobile access to the Square had been severely restricted by the Cambridge Fire Department. ...

NeutralSurface took photos, including the one on the right. Sushiesque was on the scene later in the morning taking photos of the aftermath:

Mishka gets the day off.

Flaming manholes of death explode in the North End

Then again, it has been awhile since manholes last exploded in the North End. Also, despite the cool headline, nobody died from the geysers of flame, although, as you might expect, people were none too happy.

Channel 5 has some video.

The Pulitzer for Best Explanatory Paragraph goes to the Globe for really bringing the story home - especially for all its readers in Kansas:

Manhole explodes this afternoon on Needham Street near Rte. 9 in Newton (two blocks from Margalit, who is starting to wonder what the deal is with her neighborhood's karma).

Tires blown at coverless manhole on Nonantum Road in Brighton this morning.

If you survive a flying manhole cover, call this number immediately

Drivers are advised to pull onto the shoulder, completely out of travel lanes, before making a call.

You can also report dangerous conditions via the Web, although MassHighway says that page is only staffed during business hours.

Two more, in the same basic area on the Southeast Expressway as the one that got wedged in a bus yesterday; one driver lost control and slammed into a Jersey barrier.

Couple this with Josh Simons's HazMat game (identify hazardous cargos by the numbers on the placards on the back of the trucks) and you get a new way to spice up the commute: "Say, Bob, whadaya think would happen if a flying manhole cover sliced through that truck with the '3' hazardous placard?"

Oh, we thought we were just supposed to check manholes on 128

Manhole cover gets wedged under bus on Southeast Expressway.