If you get separated from your wife at the House of Blues, maybe don't storm into the women's room and start kicking the stall doors open

A married couple who got off a party bus to enjoy the House of Blues one January night wound up getting the venue hauled before the Boston Licensing Board today because after they became separated, he began rummaging through a women's room - slamming a stall door into another woman's head when he kicked it open in his search for his wife. Read more.

Three women think they got spiked drinks, but is a Lansdowne Street bartender to blame?

Update: The board found a violation for providing free drinks, but not for the possible drink spiking, which was not a subject of the bar's citation.

The Boston Licensing Board will have to decide whether a bartender at Game On on Lansdowne Street gave three young women free shots - possibly spiked with a date-rape drug - during a brief July visit, or whether something else might have caused their memory loss, heavy vomiting and odd behavior after they left. Read more. 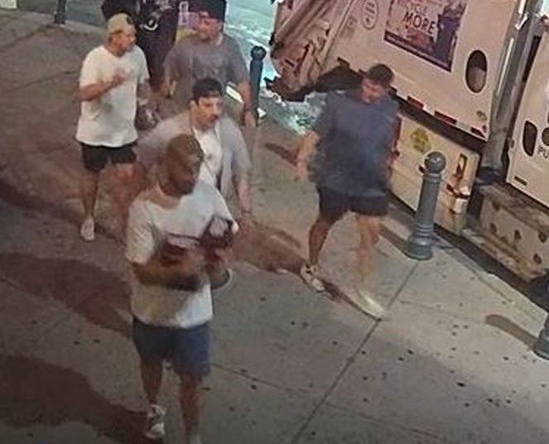 Boston Police are seeking the public's help to identify the pack of bros who beat a man at Lansdowne and Ipswich streets early on Sept. 9. Read more.

The Zoning Board of Appeal today approved marijuana shops proposed for what is now the Little Steve's pizza place on Boylston Street and the basement of the Cask 'n Flagon at Brookline Avenue and Lansdowne Street. Read more.

The developer behind the 23-acre Seaport Square project in the Seaport says it will soon file plans to redevelop a total of eight acres around Fenway Park - including a deck over the Massachusetts Turnpike - that will include eight new buildings with offices, residential space, restaurants and stores. Read more.

Boston Police report that what began as an investigation into a reported sexual attack at the House of Blues on Lansdowne Street last night turned into a large-scale crowd control effort involving some 1,000 fans of the rapper Kodak Black, upset because he'd failed to show up for his performance - since he was in federal custody in upstate New York, although nobody knew that at the time. Read more.

Update: Police initially called to House of Blues on report of a sexual attack.

Cops from across the city swarmed Lansdowne Street after a brawl broke out around 9 p.m. at what was supposed a concert by Kodak Black concert at the House of Blues, only the performer didn't show - turns out he had been arrested at a Niagara Falls border crossing on gun and marijuana charges. At least one person was arrested - and two taken to a local hospital with injuries. Some photos.

The Boston Licensing Board decides Thursday whether the House of Blues deserves any sort of punishment for a mosh pit on that police said this close to becoming something worse at a June 1 rap concert. Read more.

Angry guy who was asked if he could punch a girl decided he could; now he faces a criminal charge

Police say a man who accidentally spilled beer on fellow concertgoers at the House of Blues on March 30 wound up getting in an argument that ended with him about to punch a woman, only to stop when she asked "You're going to hit a girl?" a BPD detective told the Boston Licensing Board this morning. Read more.

WBZ reports two men stabbed at Lansdowne and Ipswich streets late Wednesday night made their way to a Mobil station on Memorial Drive in Cambridge, where police caught up with them and found them reluctant to discuss the incident.

So a guy walks into a bar with a butt-biting emotional-support dog ...

On the evening of July 20, a man who said he was a Marine walked into Game On on Lansdowne Street with what he said was an emotional-support dog. By the time he left, police and bar managers said, he slapped one woman in the face, punched a bouncer twice and unleashed his now snarling dog on the crowd, urging it to bite everybody. Read more.

Hubbub at the Pru 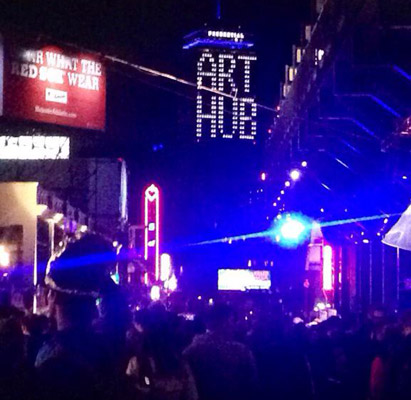 Grace Holley looked up from Illuminus on Lansdowne Street to see the Prudential lit up in honor of both it and HubWeek.

He flew down Ipswich when the cops arrived, but was unable to evade their tag. No word what he measured on a radar gun.

Lansdowne Street bars forced to deal with racist Sox fans from NH, an angry ex-serviceman and a dumb credit-card thief

Bouncers managed to avert physical contact and injuries at Bill's Bar on May 17, when a guy in a group of white Sox fans about to get on a bus to go back to New Hampshire after a game and some drinking decided to scream a racial slur at a small group of black men entering the bar, police and bar workers told the Boston Licensing Board today. Read more.

Yeehaw: Boston to get country-themed restaurant

The Lyons Group wants to turn a closed taqueria on Lansdowne Street into a down-home eatery serving old-fashioned Southern food to the sound of country, bluegrass and folk music.

The Boston Licensing Board formally votes this afternoon whether to allow the company to convert La Verdad into Loretta's Last Call.

Hot diggity dog: Soon you won't have to wait for a Sox game to buy a Fenway Frank in a bun

The Zoning Board of Appeals today approved a plan by the Red Sox to operate a hot-dog stand on the Lansdowne Street side of Fenway Park whenever the Red Sox aren't playing.

Sox attorney Dennis Quilty did not specify exact hours, but noted that under its existing food-serving license, Fenway can sell food until 2 a.m.

The stand, to be called Fenway Franks, will also sell burgers and soda, he said, adding, however, that beer will not be on the menu.

He said the Sox are also preparing a formal request for a food truck on Yawkey Way.

Police: Suburban man gets up to ramming speed on Lansdowne Street

Officers on patrol near closing time on Lansdowne Street early this morning arrested a Norfolk man after watching him "running at full speed, run smack dab into the side of a cab that had stopped to pick up a fare," denting the vehicle.

DA: Visiting New Yorker not part of 'trivial' bar argument that ended with his death

Hector Guardiola, 25, of South Boston, was ordered held in lieu of $75,000 bail at his arraignment today on a manslaughter charge in connection with the death of a visiting New Yorker at the Lansdowne Pub early Saturday, the Suffolk County District Attorney's office reports.

If nothing else, employees of Tequila Rain learned today they have to call 911 immediately when a patron starts acting up, even if there's a detail cop right outside.