Insurance companies can't be forced to reimburse Massachusetts patients for medical marijuana use, at least not until the federal government legalizes it, court rules

The state's highest court today rejected an injured worker's request that the company that paid him worker's comp pay for his purchases of the medical marijuana that eased his pain following complications from surgery for a work-related injury. Read more.

The reports from other countries were that this was happening mostly to older people who had illnesses to begin with. But we are seeing in Boston that this is happening to younger people who don't really have any predisposing illnesses like cardiac disease or cancers.

You think people in California realize Boston has hospitals? 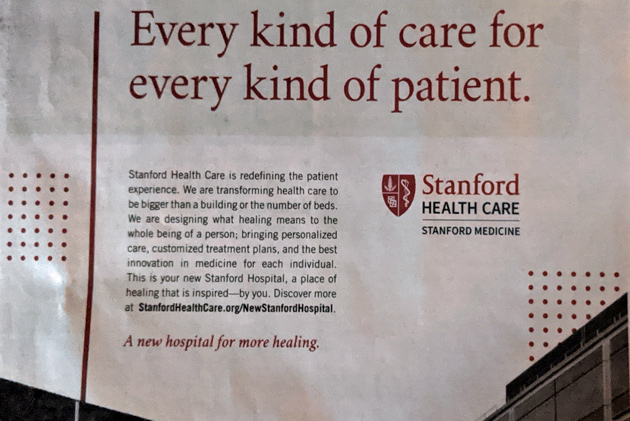 Today's Globe has a full-page ad that promotes all the wonderful care patients can get at a newly rebuilt hospital - in Palo Alto, CA. Read more.

WBUR reports at least 20 children now receiving care at Boston hospitals for, among other things, cancer, cystic fibrosis, HIV, cerebral palsy, muscular dystrophy and epilepsy have been given about a month to get out of the US because the government no longer cares to let their kind stay in the US, no matter how sick they are.

NBC Boston reports Tufts Health Plan and Harvard Pilgrim Health Care are looking to become a single insurer. No word on which college name will get dropped from the new entity or if they'll just have a computer generate some nebulous sounding new name.

Standing for abortion rights at the State House 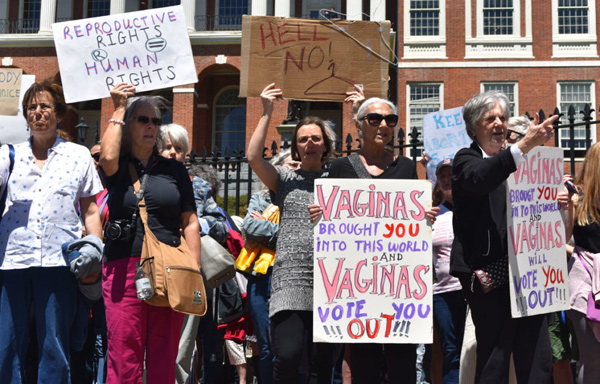 Greg Cook attended a rally and protest at the State House over abortion bans being enacted in several states. 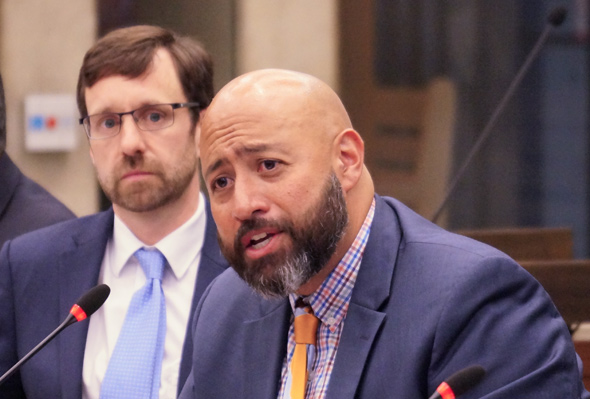 Boston officials say they plan to go to court - and to state environmental officials - to try to overturn a decision by the Quincy Conservation Commission to reject plans for construction of a new bridge to Long Island, where Boston wants to build a new addiction treatment campus. Read more.

WGBH tries to answer questions about the referendum question that would mandate certain nurse/patients ratios in hospitals.

The Herald reports Mass. General, Brigham and Women’s and Boston Medical Center agreed to share a total of $1 million in fines for violating patient privacy during the filming of ABC's "Save My Life: Boston Trauma” in 2014 and 2015 - although the hospitals say they didn't violate patient privacy.

WBUR reports on Children's Hospital's new transgender surgery center - which only takes patients over 18 - and interviews its first surgical patient.

The Boston Business Journal reports Mayor Walsh had something to do with the health center's decision to rescind layoffs announced Thursday, although it was not clear exactly what.

A federal judge today dismissed a lawsuit by an anesthesiologist who sued Mass. General over double-booked surgeries - but gave her 45 days to come up with detailed proof the government was billed for operations senior surgeons did not actually participate in and so re-open the suit. Read more.

The State House News Service reports the individual mandate - basically a requirement for people to get or buy health insurance - will remain in Massachusetts thanks to the 2006 Romneycare law.

UPDATE: Boswell has resigned or been fired.

It's not just that a Fenway employee has been accused of multiple instances of sexual assault and bullying, but that CEO Stephen Boswell covered it up and when the board of directors found out, they participated it in the coverup, Bay Windows writes.

Kindred Healthcare of Louisville, KY, has notified state regulators it plans to shut its Harborlights nursing home on East 7 Street by the end of March. Read more.

Not enough ambulances in Boston?

WFXT takes a look, includes the story of a two-year-old in seizures for nearly 20 minutes until an ambulance arrived in East Boston - which has just one BEMS ambulance serving it.

The House vote to gut much of the Affordable Care Act will cost Massachusetts more than a billion dollars a year, Gov. Baker says. After the vote, Baker, like the majority of the House, a Republican, vowed to fight the measure in the Senate.

The proposal would also effectively diminish a woman's right to abortion by banning insurance companies that offer insurance through the state health connector from covering abortion and would block MassHealth members from getting care at Planned Parenthood. And even people who get insurance through work could be screwed, because the law would let insurers offer plans to companies with operations in multiple states that are based on the one with the worst (for consumers) plans.

The measure now goes to the Senate.

The Boston Business Journal reports that Mission Hill's only hospital specializing in bone and joint care is casting its lot with Beth Israel Deaconess Medical Center and the Lahey Clinic in their bid to take on Partners.

Baker: Massachusetts would get screwed by Republican health-insurance plan

State would lose billions in coming years, the Herald reports. And that doesn't include the risks to people who would no longer be able to get coverage at all.