The Globe reports that Kevin McCrea, a South End resident who ran for mayor in 2009 and as a clown named Pat Payaso for an at-large City Council seat in 2017, has died of a heart attack.

Kevin McCrea (yes, that Kevin McCrea) proposes using some of that there smart technology to deal with winter space saving: Basically charge residents for city space savers embedded with GPS devices that could report to City Hall:

After a snowstorm, when a 'host' shovels out a spot and needs to drive off they put their "Official City of Boston Space Saver" in their spot and log that spot into the 'Space Saver Hub'. They give their account and password and enter when they need to return to the spot. The "Space Saver Hub" uses the GPS embedded into the device to log the location. A display screen on the device could flash "Free until 6 pm" or whatever time the person plans on returning. The host is responsible for keeping the device charged and/or batteries installed.

A 'guest' driving through the neighborhood would have two ways of finding a space to park. One is to look for the flashing displays on space savers, the second is to have their smart phone alert them to available spaces in the neighborhood.

UPDATE: The date has been changed to May 25.

A Suffolk Superior Court judge today set the hearing date for a lawsuit first filed in 2005 by three residents against the Boston City Council - on both their original complaint and new allegations that the City Council continues to evade the Open Meeting Law.

After his run for mayor, McCrea heard there were openings on the Boston School Committee. So he applied (note to non-Bostonians: Unlike pretty much every other place in the state, Boston has an appointed School Committee). And McCrea, who knows something about the state Open Meeting Law, promptly learns the appointment process in use for 10 years or so, may not be in compliance with the law (also, he didn't get one of the seats).

Campaign notes: Kevin McCrea's anguish over an endorsement; And Sam Yoon as the Boy Wonder

Kevin McCrea explains why he's voting for Flaherty tomorrow - and how he almost endorsed Menino instead, he and his wife even went to dinner with the Meninos at Hammersley's Bistro in the South End. In the end, he writes it came down to a single issue:

The South End News gets the scoop.

Last week the potential deputy mayor told the Jamaica Plain Gazette that Kevin McCrea didn't get any more votes than Donald Duck would have. Oh, and Floon joked about the number of public-records and open-meeting complaints filed by McCrea - including, you know, the lawsuit against the City Council, Michael Flaherty, president, that McCrea won:

Guess what? McCrea tells the paper this week that Yoon called to apologize after the remarks showed up on the paper's Web site.

Menino could get wish: Legislature looks closer to approving casinos

And what better place to put a "resort casino" than Suffolk Downs?

Unlike Sal DiMasi, who managed to quash casinos, successor Bob DeLeo favors them.

Tom Menino has long supported a casino in Boston - two years ago, he backed a casino at the racetrack - and repeated that support earlier this week at a candidate's forum in the Back Bay, saying it would help create jobs.

Large turnout at the forum, sponsored by the Wards 4 and 5 Democratic committees at the BAC on Newbury Street. Here's the blow by blow: Yoon, Flaherty and McCrea this morning.

The three mayoral candidates today charged Tom Menino and his aides with deliberately covering something up, although exactly what, they couldn't say, since the e-mail doesn't appear to exist.

At a press conference with Flaherty and Yoon outside City Hall, however, McCrea said he would not be surprised if mail related to Dianne Wilkerson's attempt to get a liquor license for a contributor were among the large volumes of mail deleted by Menino aide Michael Kineavey. In an affidavit in the Wilkerson case, the FBI noted extensive contact between the former state senator and City Hall.

If so, look for the knot of mayoral candidates and camera crews: Michael Flaherty, Sam Yoon and Kevin McCrea are holding a press conference to call for criminal investigations into the way top city officials allegedly deleted massive amounts of e-mail, which is against the law (right out front).

As the Outraged Liberal reminds us, there's a certain irony in Flaherty teaming up with McCrea on the issue (which the Globe follows up on today - one guy was going into his deleted folder and deleting stuff there). McCrea won a lawsuit against the City Council - Michael Flaherty, president - for violations of the Open Meeting Law (Flaherty acknowledged the issue in announcing his run for mayor).

Meanwhile, if any probes do get launched, Michael Pahre has volunteered 19 pieces of e-mail that he or people he knows either sent or received from Menino aides Michael Kinneavy and Tom Tinlin.

Tomorrow is 9/11. Why don't you want neighborhood cops to be armed with semi-automatic weapons?

Mayoral candidate Kevin McCrea posts a copy of a letter that would seem to indicate Allston/Brighton City Councilor Mark Ciommo managed to convince at-large Councilor (and mayoral candidate) Sam Yoon to "scale back" a proposed hearing order on Boston College's expansion plans. Ciommo had promised to recuse himself from BC deliberations because his son got a scholarship there.

... I have not contradicted any aspects of my disclosure form.

Councilor Yoon approached me to co-sponsor a late-file Order for a Hearing regarding the BRA process with Boston College's [institutional master plan]. I provided him with my feedback that I supported several components of the Order for a Hearing, but that I thought that some of the language was inaccurate. I also felt that some of the language was politically charged.

My intent was to remove politics from the discussion and focus on the BRA process. I think the end result was a more productive hearing. ...

The Globe reports that city programs intended to get small pieces of land back on the tax rolls by selling them to neighbors have meant profits for at least two landowners in Jamaica Plain - just like mayoral hopeful Kevin McCrea said. The city calls these "oversights."

How Boston sells off small pieces of land

Kevin McCrea raised the issue in Wednesday's debate and today the Globe takes a look at city programs aimed at getting vacant lots back on the tax rolls.

Bruce Mohl runs down some of Kevin McCrea's accusations in Wednesday's debate, says the facts don't all agree with them.

Graphical look at the words the candidates emphasized.

Mayoral debate without the mayor next week

Jim alerts us there'll be a mayoral debate on Wednesday, Sept. 16, 6:30 p.m. at the East Boston Social Center, 68 Central Sq. Three candidates have agreed to participate.

What follows are my notes on the debate tonight. Props to Jon Keller for coming up with a form that allowed for an actual debate, rather than one of those stilted side-by-side affairs where the candidates never really address each other. Although with four people running, an hour was too short.

Who won? I'm terrible at judging things like that. At times, it seemed like a debate between Menino, Yoon and McCrea, with Flaherty on the sidelines. Yoon seemed too focused on Menino as the leader of SPECTRE, McCrea seemed too focused on getting the other three indicted, and Menino veered from the question sometimes (like answering some question about city finances by talking about how diverse city commissions are). But if you watched it, what do you think? 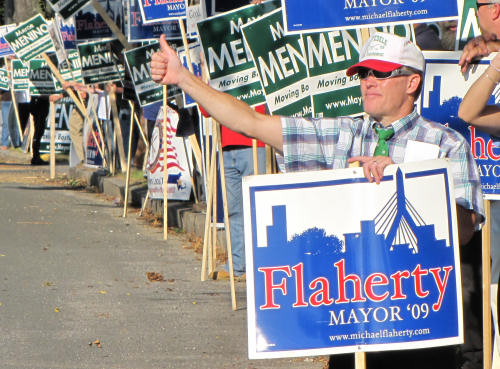 The mayoral campaigns organized standouts outside WBZ studios in advance of tonight's debate.

Menino and Flaherty supporters were out in force along both sides of Soldiers Field Road. Scores of them and they just kept coming.

Some Yoon kids and grandparents showed up relatively late and never tried to muscle into the fray - maybe the beefy union workers for the Flaherty and Menino campaigns scared them, so they stayed clumped together more than a block away. They did have cute little maraca-like shaker things - which were completely inaudible to anybody driving by, unlike the air horns that a number of Flaherty men blared.

McCrea people? When we left, around 5:20, we hadn't seen a single one (and we walked up and down the road a couple of times). Maybe they got stuck in traffic on the way over from the South End.