After trip to Washington, Worcester hospital employee no longer has a job; first IDed for her role in an attack the night before the riot by own daughter

UMass Memorial Medical Center reported this evening that one of its caregivers who may have stormed the Capitol during the failed coup attempt "is no longer a part of our organization." Read more.

Update: One UMass employee no longer has a job.

No snow days for Worcester schools, but some kids got an Internet-outage day today

Parts of Worcester lost their Internet service today - along with cable TV and credit-card processing.

Worcester Public Schools, which announced in October it wouldn't cancel school because of snow, at least while classes were being taught remotely, announced today: Read more.

State to re-open Worcester field hospital in a couple weeks

Gov. Baker today announced the state will be re-opening a 240-bed field hospital in the DCU Center by December as the Covid-19 hospitalization rate continues to rise.

The party in question was this weekend, several days after the school announced it was moving to online learning this fall. Holy Cross announced it is very, very disappointed in the students.

WBUR reports the Beaumont Rehabilitation and Skilled Nursing Center in Worcester has stopped transferring patients to another facility because one of the remaining patients has now tested positive for Covid-19.

Gov. Baker had announced plans earlier this week to convert nursing homes with up to a total of 1,000 beds into Covid-19 facilities for patients who still need care, but not at hospital levels.

First live snowball of the season 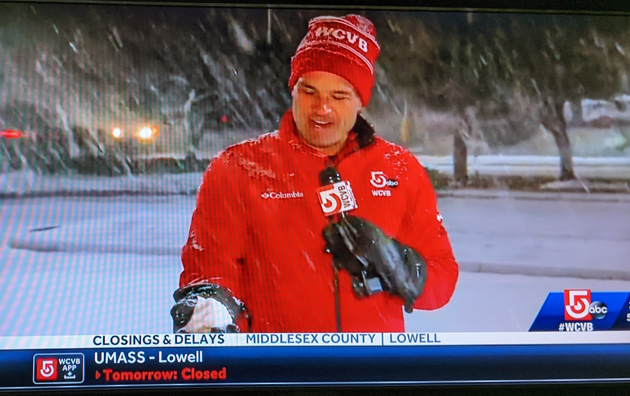 Shortly after 5 p.m., WCVB's Duke Castiglione went live with a handful of snow, which he declared not really snowball-worthy, so he didn't throw it at the camera.

He was one of just five reporters and weatherpeople to flash on screen at 5 p.m, as Channel 5 warms up for the season: Read more.

Worcester Magazine recaps yesterday's Worcester City Council meeting, which included some in-your-face'ing towards Boston because the Worcester Public Health Division is the first in the state to receive accreditation by a national public-health accrediting board:

Rosen: This is yuuge. I heard the Boston City Council met last week, and with over 1,000 employees - we have 23 - they have a huge budget, we have a small budget – and they tried to get this, and couldn’t. Boston is envious of the city of Worcester, as they should be. 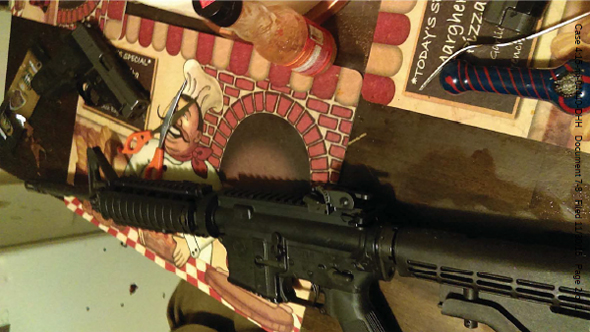 Feds say this photo was taken from suspect's phone; shows stolen weapons in her home.

Ashley Bigsbee, 26, was charged with possession of one of the machine guns stolen from a Worcester armory last month after investigators found photos on her phone of the weapon in her Page Street home - and after the man charged with the burglary implicated her - according to federal officials. Read more.

The Worcester Police Department reports it has charged one of its officers with assault and battery for an incident Dec. 1 involving a man awaiting a court appearance:

The complainant and witness alleged that during the prisoner release process, the officer made a disparaging remark with respect to the complainant’s “black” skin.

A federal appeals court yesterday upheld Worcester regulations to ban "aggressive" panhandling, saying the city was not trying to squelch anybody's free speech but rather protect the public from panhandlers getting up in the grills of motorists and pedestrians.

Just the tail end of the crash. Photo by Mass. State Police.

Take a look at this video of the aftermath of a multiple-vehicle crash on I-290 in Worcester around 7:00 a.m.

State Police shut the Lowell Connector entirely due to ice.

Wellesley Police are also reporting a number of crashes.

Channel 7 reports a firefighter pulled from the wreckage of a collapsed triple decker has died. Two other firefighters were also injured. Channel 5 has video of the fire.

The fire comes just a few days after the anniversary of the 1999 Worcester Cold Storage Warehouse fire that claimed the lives of six firefighters.

Tornadoes could be canceled by hurricane

The Worcester Tornadoes are supposed to be playing their final homestand this weekend.

In Worcester, where Jeff Bernard reports on a surprise from the mayor and a city councilor.

Daily Worcesteria reports they walked back and forth across Main Street today, holding signs with slogans like "Let us cross. It's the LAW!"

Wigged out in Worcester

Some people spent today at Castle Island, or on the Common or just going for a walk. We drove to Worcester. It's just how we roll, plus, the kidlet had never been to the Big W. So we wondered why Lake Quinsigamond isn't a river, pondered the part of Rte. 9 where Boston TV stations always send rookie reporters to stand in the snow, marveled at Union Station, then parked near Worcester City Hall and walked around. Even in wintertime, there's a lot of green there, such as the display at Sonja's Wig Salon on Franklin Street and the statues that make up the Civil War monument:

The alley next to the abandoned Paris Cinema:

The new Hub will be....Worcester?

Well, at least when it comes to rail transportation. The T&G reports today that as CSX winds down operations in its Beacon Park yard in Allston, it's planning to shift its operations to the west. And according to Transportation Secretary Jeff Mullan, the new set-up promises to "make Worcester the freight rail hub for all six New England states with east-west and north-south rail connections with access to highways."