Blank walls no more on McBride Street in Jamaica Plain 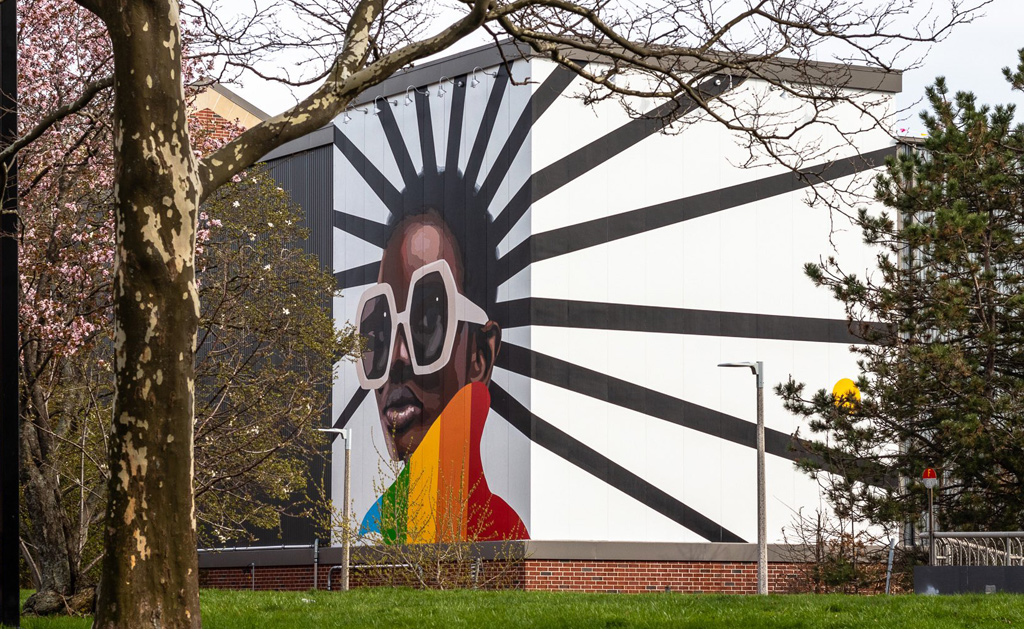 OzonePhD is loving Sharif Muhammad's new mural on the side of the new self-storage place on McBride Street, next to English High School and the Southwest Corridor Park in Jamaica Plain.

The artist's work being transferred to the walls.

Mural before it was defaced.

Just three months ago, artist Hiero Vega finished this mural on the side of his brother's Vivant Vintage clothing store on Lincoln Street in Allston. Sometime this week, somebody who has yet to master the art of writing, let alone a sense of shame, defaced it. People who admire the work are raising funds to pay for Vega's travel up from Florida and the cost of the new paint so he can repair the damage.

Allston gets a new mural, this time on a bridge

CORRECTION: Post updated to reflect the bridge was painted by a different crew than the one that did the Cambridge Street murals.

Ron Newman reports that days after the city wiped out murals on the building at Cambridge and Linden, another group was at work yesterday redecorating the nearby pedestrian bridge over the turnpike and train tracks.

Gorilla my dreams in Allston 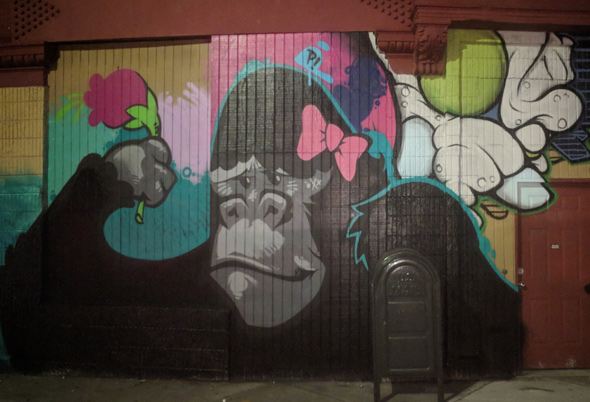 Ron Newman trekked over to Allston tonight to see the controversial new mural at Cambridge and Linden streets, only to find it's already been replaced by a new gorilla mural.

The woman who loves murals

WBUR interviews Christine Verret, who took photos of hundreds of murals in the Boston area, with her son Adrien, for a new book on, well, Boston murals.

Heineken has apparently paid somebody to paint little murals at some liquor stores in Roxbury and Dorchester that read "Roxbury Love" and "Dorchester Love," as appropriate, over large stars featuring a bottle of their product. Fine as far as it goes, but see if you can spot any similarities to the well known "Roxbury Love"/Mandela mural painted awhile back by a couple of local artists: Read more.

The Mayor's Mural Crew and the Mayor's Office for Immigrant Advancement are teaming up to paint murals under the theme of "To Immigrants with Love."

Atlas Liquors on Hyde Park Avenue in Roslindale and Dr. Dental on Meridian Street in East Boston have donated their wall space for the murals, being painted this month. Read more.

The cat is out of the bag on new Roslindale murals

Looks like the Mayor's Mural Crew has given up trying to simply restore the bird mural at Washington and Archdale streets that has been defaced, restored and then defaced again over the past couple of years. Instead, work has started on a mural featuring a giant cat. Read more.

The artist had an audience

Michael Ratty joined the group watching artist Genaro Ortega (on the scaffolding on the right) work on his new mural at Peters Park in the South End today.

RyanInBos watched the painter of this new mural at 316 Meridan St. in East Boston at work and then shot the finished work.

For the second time in six months, vandals have defaced a mural at the corner of Archdale and Washington Street that depicts a Dominican saying. Unlike in June, today's defacement appears to be the work of two different taggers.

After the first incident, members of the Mayor's Mural Crew repainted the mural about two weeks later. The mural crew, however, consists of high-school students who only work in the summer.

Somewhere over the rainbow tank 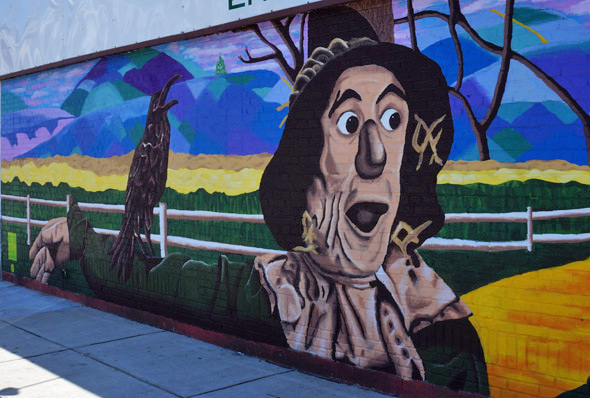 The Mayor's Mural Crew this week finished an homage to Dorchester's own Ray Bolger, best known for his role as the Scarecrow in "The Wizard of Oz." It's on the side of Romel Dry Cleaners, at Dorchester Avenue and St. Mark's Road.

A mural showing Charles River rowers on a wall in Lincoln Street that recently went up has already been defaced by some jerk who's doing his part to "keep Allston shitty." Universal Hub users who think that not posting photos of such defacement is equivalent to lynchings can see the damage. Maybe some volunteers can do for this mural what the Mayor's Mural Crew recently did for a defaced mural in Roslindale.

As one mural in Roslindale nears completion, another one begins

The Mayor's Mural Crew is nearly done with the mural on Archdale Road at Washington that illustrates a Dominican saying about how much a bird in the hand is worth - and has begun work on another mural a block away on the side of the Little People's Playhouse on Washington: Read more.

Anulfo Baez, who is chronicling Boston's public murals, reports on the graffiti that now covers the mural on the side of Lawson's Brother's Hairstyling Salon in Egleston Square.

The Philistines of Somerville's Foss Park

Somerville has a well-deserved reputation for fostering and supporting the arts.

Kat puts together a slide show of JP murals.