BPD Commissioner William Gross, who rose from a cadet to become head of the nation's first police department, went on the department radio today to thank officers and say goodbye at the end of his final day on the job. Read more.

William Gross is retiring as Boston police commissioner tomorrow, fueling further speculation that he might be planning to run for mayor this year - speculation that Dan Rea at WBZ Newsradio says is for nought.

Mayor Walsh announced Gross will be replaced by Dennis White, currently BPD superintendent and Gross's chief of staff. He would be the department's second Black commissioner. Read more.

Boston officials hopeful we won't see violence, but ready if we do

Mayor Walsh and Police Commissioner William Gross said today police presences will be ramped up over the next few days to deal with any potential consequences of Tuesday's election. Read more. 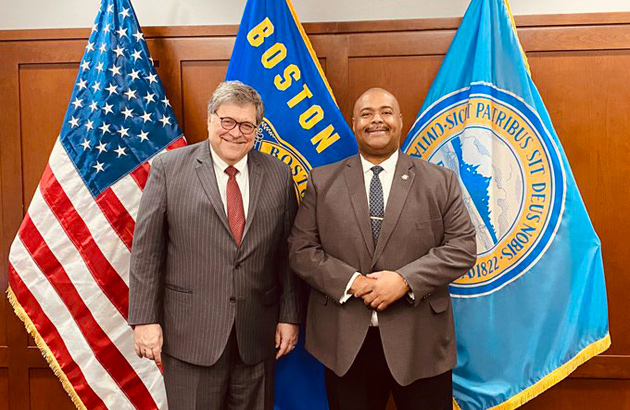 Look who showed up on Tremont Street in Roxbury today. The Justice Department posted this photo of Attorney General William Barr and BPD Commissioner William Gross, both grinning, which you can easily tell because neither is wearing a mask, which Gross, at least, had been so good at doing up until now, unlike Barr, who won't don a mask even if might mean getting a whiff of the tear gas he's just ordered police to fire at peaceful protesters. Read more.

Mayor Walsh today declared racism a public-health crisis in Boston and announced he is shifting $3 million from the Boston Police overtime fund to public-health efforts - and that he will also the City Council to approve another $9 million shift from police overtime to efforts aimed at ending racial disparities in Boston. Read more.

Walsh and Gross say they're not going to let violent outsiders ruin Boston; Rollins says rampagers will be prosecuted, but tells whites that black rage is real

At a City Hall press conference today Mayor Walsh and Police Commissioner William Gross vowed not to let rioters repeat last night's performance in Boston and to keep Boston a safe haven for people to protest in. Read more.

A normally calm Police Commissioner William Gross exploded in anger at a City Hall press conference today, implying that last night's quintuple shooting had something to do with judges who have granted prisoners and people awaiting trial early releases because of Covid-19 concerns. Read more.

Boston police commissioner would have fired those four Minneapolis cops, too

Sometimes, the workers at Boston's ISD just have to get down

Walsh has replacement lined up for outgoing BPD commissioner