Andrew Square residents, officials don't want late-night pizza at Old Colony rotary, but they don't want a pot shop there, either; one suggests a nice ice-cream shop or coffee place instead 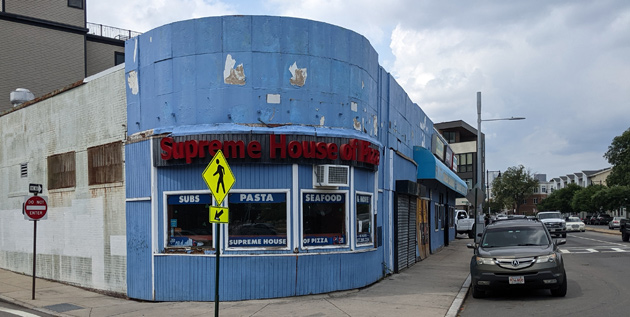 From Supreme House of Pizza to Simplicity Dispensary?

A North Grafton man's proposal to turn the decrepit and now closed Supreme House of Pizza at 313 Old Colony Ave. in South Boston into a modern recreational-marijuana shop met with heavy opposition at a community meeting this evening - just a day after the owner of the pizza place withdrew his application to deliver pizza until 2:45 a.m. on weekends. Read more.

The City that Always Sleeps: No extra late-night pizza delivery in Andrew Square

In the face of overwhelming neighborhood opposition, the owner of an Old Colony Avenue pizza place yesterday withdrew his request to extend its weekend delivery hours from 11 p.m. to 2:45 a.m. Read more.

Red Line service shut after man winds up on tracks at Andrew, bleeding from the head

Transit Police and Boston firefighters responded to the inbound side of the Andrew Red Line station around 10:40 p.m. after a man somehow wound up on the tracks, bleeding from the head, next to the third rail as a train was coming in.

The man was not under the train, so firefighters were able to quickly get him off the tracks and hand him over to Boston EMS for transport to a local hospital.

Man didn't want to leave T stop early in the morning, so he threatened a worker with a knife, but kept his hatchet in his backpack, police say

Transit Police report arresting a Newton man on charges he used a knife to threaten an MBTA worker who tried to shoo him out of Andrew on the Red Line around 1 a.m. on Monday. Read more.

Teens attack, rob woman at Andrew, hop on a train, get arrested at the next stop, police say

Transit Police report arresting two of three teens who jumped a woman at the Andrew T stop around 8 p.m., then figured they could escape on an outbound Red Line train coming into the station, only they figured wrong because police were waiting for them at JFK/UMass. Read more.

Just a reminder: The T has a pretty comprehensive camera network

Too early to be practicing for the Olympic javelin toss.

For better or worse. But what it means is that if, oh, you're at Andrew on the Red Line and you decide it might make sense to throw some metal object onto the third rail and the T has to stop service so it can retrieve that item, chance are good Transit Police will pull a snap of you of one of the surveillance cameras, which should make it easier for them to find and arrest you. Read more.

Man on the Red Line asks guy to stop leaning into him; guy pulls out one of his two knives and threatens to stab him, police say

Transit Police report arresting a local man on a charge of assault with a dangerous weapon for an incident on a Red Line train hurtling underneath South Boston during the Friday afternoon rush hour. Read more.

The Red Line decides to screw; there's a dead train at Andrew

A Red Line train gave up the ghost at Andrew. The T reported delays of 20 minutes as the train sat there, moldering, but now that they've brought it out back and service has resumed, delays have increased to 25 minutes.

MBTA experimenting with earning some extra cash by turning busways into car washes?

It sure looked that way tonight at Andrew station: Read more.

Man pulled out from under train at Andrew 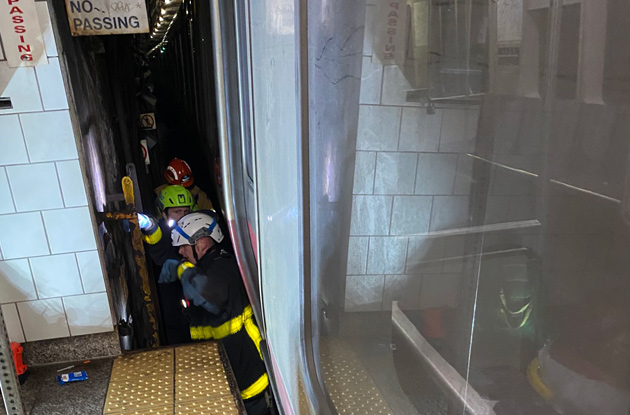 The Boston Fire Department reports firefighters responded to Andrew on the Red Line around 1:30 p.m. for a person under a train. The department reports they were able to remove the man and hand him to Boston EMS, which transported him to a local hospital.

Transit Police report arresting a man for beating up a woman who looked like she'd just been punched slapped hard in the face at the Andrew T station - and for the 19 outstanding warrants he already had out, including for incidents in which he allegedly attacked a disabled person, a police officer, an EMT and a jail guard, in different parts of Boston. Read more.

Soon, you could quaff a beer after a hard-fought pickleball or shuffleboard match in South Boston

The Boston Licensing Board could decide tomorrow whether to let a proposed indoor pickleball emporium recreate the best of the Catskills or a cruise ship at an old factory building at Old Colony Avenue and C Street, where patrons could play pickleball, shuffleboard or cornhole, then retire to a cabana to cool down and get something to drink. Read more.

No, the British weren't trying to recapture Dorchester Heights today

Yes, there was cannon fire today, but it part of groundbreaking ceremonies for the Washington Village housing complex in Andrew Square.

A man already awaiting trial on drug charges in Woburn was arrested at the Andrew Square Red Line stop after he allegedly punched another man in the face and then used a knife to slash his face and arm Friday evening, Transit Police report. Read more.

The FBI has posted photos of the guy they say held up the East Boston Savings Bank branch at 501 Southampton St. in South Boston's Andrew Square around 4 p.m. on Tuesday.

If he looks familiar, contact Investigator Zach Brune at 857-386-2000. And mention the Mass Most Wanted TIP Program - there might be a reward in it for you. 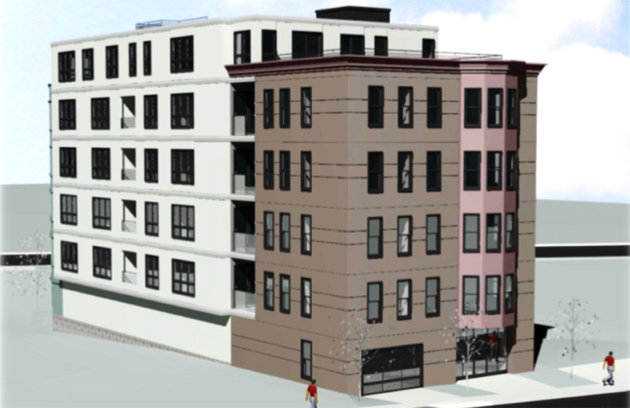 The new owners of a two-story, three-family house at 44 Ellery St. in South Boston's Andrew Square have filed plans to replace it with a six-story,18-unit condo building. Read more.

It was tool time on the T, at least until the police got to Andrew

Transit Police report officers rushed over to Andrew station on the Red Line Wednesday morning after getting word that two guys had walked out of a Quincy store with several thousand dollars of merchandise they hadn't paid for - and then used the Red Line as their escape route. Read more.

Transit Police report they are looking for a guy with a brick in each hand who smashed a man with them at the Andrew Square Red Line station around 1:45 p.m. on Saturday. Read more.