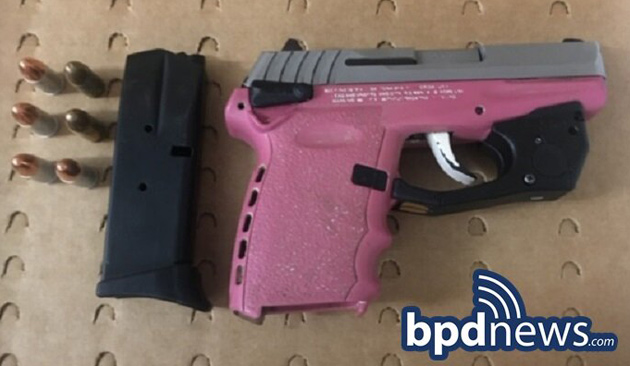 One of the seized guns.

Boston Police report arresting men from Roslindale, Roxbury and Dorchester on gun charges as part of "an ongoing investigation" Saturday afternoon on Blue Ledge Terrace, near the scenes of shootings and gunfire in recent months.

Jayvon Williams, 19, of Roslindale, Anthony McGruder, 26, of Roxbury and Terrance James, 31, of Dorchester were arrested at 22 Blue Ledge Terrace in the Stony Brook Commons development, police say, adding officers seized a loaded 9-mm Glock 43 handgun and a loaded 9mm SCCY CPX-1 handgun equipped with a laser sight, which had previously been reported stolen in Alabama.

On Nov. 11, shots were fired at Beech and Grandview streets near the Washington-Beech development, which is next to Stony Brook Commons.

On Sept. 21, somebody was shot at Washington and Haydn streets.

On July 31, a man was shot in the head outside Nick's on Washington Street.

On July 14, a 14-year-old wearing an ankle bracelet was arrested on gun charges after police say they found him at Washington-Beech with a loaded gun.

Are Boston's neighborhoods immune to gun possession laws? It seems that way. Who is trafficking these guns to these guys? Definitely connected to drug trafficking as well. Untouchable.

I was told those pink guns were for patriotic suburban women to protect themselves from MS-13 and Socialists?!?

How on earth did it get in the hands of these lowly street punks!?!?

Real guns made to look like plastic toy guns should be completely banned. Foh with that, there's no reason for a gun to look like anything but a deadly weapon. The manufacturer should be shut down and they definitely shouldn't be street legal in MA

But it's so cute!

It looks like a gun to shoot Smurfs with.

Why do I think

Why Do I think someone like a lady PI that wears a garter belt would have that pink gun. (a la "Silk Stalkings")