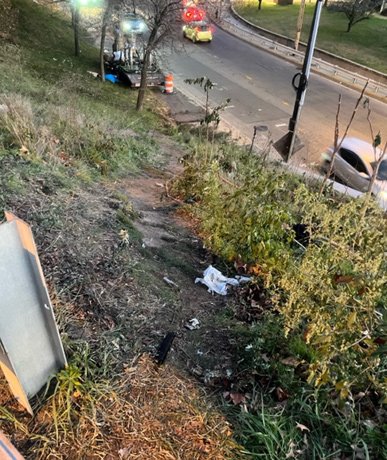 A roving UHub photographer snapped this shot of the only way to get into JFK/UMass from Columbia Road now that the T has shut the original entrance for some sort of construction. For some reason, the T officially would prefer that people coming from the west take the extra hike to the Old Colony/busway entrance.

The Rusty Stairs of Doom ride is temporarily closed.

Please use the Flume of Misery Entrance at the busway.

This is FUBAR with a capital F

This is an enormous and dangerous clusterfuck.

First, no advance notification for the closure, still no reason given, and no signage when it was first closed. And according to a comment on the original post, the Sydney street entrance is also closed.

The alternate route forces a pedestrian to cross several entrance and exit ramps, some with no traffic lights and stop signs. And approximately 100% of the drivers in the area are frustrated and distracted while dodging other cars in and around K Circle.

The path shown in the picture should be fun when there is snow and ice on the ground, but the official recommended diversion path is never adequately shovelled in the winter either.
There's a State Police station in the middle of all this. We desperately need police directing traffic and a real commitment to snow removal. Even if that happens, I expect we will see injured pedestrians and worse.

The fact that the station itself is falling apart just adds to the misery. Floors, walls, supports, stairs, are all in a state of severe disrepair.

This station is a transportation hub, and the location of a huge amount of current and future "transit oriented development". What a fucking disaster. Charlie is leaving Maura a huge pile of steaming excrement. I hope she's up to the task.

Except that's not the best entrance

And yes, the issue of people in wheelchairs and whatnot was already covered. For those who do not have mobility issues, if you are coming down Columbia Road, you would take a right before the highway onramp and walk down the paved path to Sydney Street. From there, it's a short walk to the other entrance. The rest of the trip involves walking up a flight of steps, so it's far from ADA compliant, but your roving photographer can take this route without much effort.

perhaps worth noting
By tape on Mon, 11/21/2022 - 5:52pm.
that they ALSO closed the Sydney Street entrance. it's probably at least a 10 minute walk to get to the other side of JFK if you're on Sydney Street. closing both of those entrances with no warning whatsoever is gross malfeasance.

That's crazy. All the Sydney Street folk have a trek ahead of them. At some point walking to Savin Hill is the better choice.

I suppose they may as well just close the entrance by the busway and get that over with.

Counting down the days until Poftak leaves.

but apparently "Sydney Street entrance" is only referring the the southern "entrance" near Crescent Street/the school (which has been exit-only since I moved to Dorchester in 2007 and I would therefore never think of as an "entrance") and not the northern one at the main headhouse, which actually is an entrance you can enter the station from.

sorry to get anyone improperly worked up, including myself, though maybe the MBTA should try to understand how words work. though I guess I'd be even happier if they could also understand how buses and trains work, which they also have a lot of problems with.

Let me be an old man for a second (or more)

Back in the 80s, the southernmost entrance, the one you think of as exit only and I thought was replaced by the police station, was the only entrance other than the Columbia Road one. It was the main entrance used by the Sydney Street side people along with those going to UMass/Boston and my high school. There were 2 separate gate lines. As was the case with all stations at the time, it was staffed with a booth. There was a woman who tended to staff the booth weekday afternoons. Her son was the dean of discipline at the high school. Suffice to say, the boys behaved themselves relatively better.

I'm glad that the entrance to the "new" headhouse is still open. Still a pain for those with mobility issues, but hopefully not bad for the rest.

So basically it's the norm

So basically it's the norm for pedestrians & bikers. Is anyone really that surprised?

You don’t need to be surprised to be angry.

Issues at Savin Hill station too

"The roadway bridge is adjacent to the station," Battiston said. "To ensure the safety of riders and pedestrians, a decision was made to close the sidewalk areas on the bridge. Pedestrians are now directed to use a temporary sidewalk along the parking lane, which is now closed to vehicles. Fencing and signs have been placed to direct pedestrians. The MBTA is also scheduling a weekend shuttle bus diversion to accommodate riders once construction begins. More information will be shared as it becomes available.""

Are there no Plovers

Living on that hill?

Group of teens attack another group of teens and a window on a T bus with bricks; two injured, windows smashed, police say
New restaurant opens in one-time comfort station in Uphams Corner
Violent, rapping Dorchester gang leader sentenced to nine years in federal prison
Board permanently shuts Dorchester restaurant that was scene of early morning triple shooting
For once the T was not at fault; blame trucker for a Red Line halt
12-year-old arrested on gun charges in Dorchester after running from stolen car driven by a 16-year-old, police say