Thanks, Mitt: Financial side of Insurrectionist in Chief's new campaign being run by a former Romney money man from Beverly 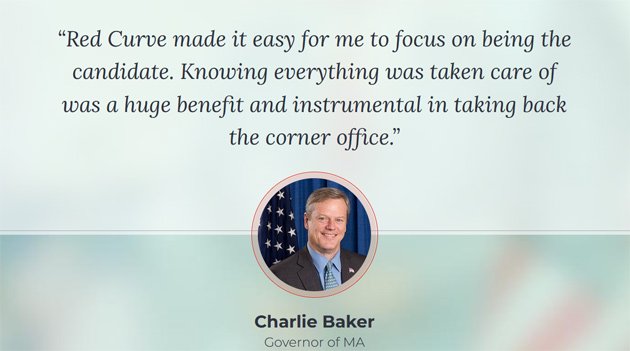 Oh, and Charlie likes the company, too

In case you somehow missed it, yes, the man who fomented a deadly riot at the Capitol on Jan. 6 is running for president again. His two officials campaign filings with the Federal Elections Commission (here and here) list Bradley T. Crate of Red Curve Solutions as his treasurer - in fact, lists [email protected] as the campaign's official e-mail address.

Although the forms list a post office box in Alexandria, VA as the mailing address, Red Curve is headquartered in an office building on Conant Street, just off Rte. 128 in our very own Beverly. The forms list Red Curve's 617 phone number.

Red Curve Solutions ® was founded during the 2008 election cycle by Bradley T. Crate, the Deputy Chief Financial Officer of the Romney for President campaign. Mr. Crate recognized the need to apply a more structured approach to compliance and treasury management to campaigns. Using a full-service model and leveraging innovative technology, Red Curve Solutions ® solves the complex problems posed by the financial logistics of modern political campaigns.

In 2012, he moved up in the Romney campaign, serving as chief financial officer for the Romney-Ryan campaign, according to this profile, which says he has "a proven track record of building a business from the ground floor up and successfully instituting processes for a highly efficient organization" and a keen eye for cost savings.

Crate also worked to get Charlie Baker elected as governor.

I’m shocked that the thin

I’m shocked that the thin veneer of civility the cowardly senator from Utah has presented throughout the past 6 years has been nothing but a sham.

I never would have expected such deception from a man who lied about his address to get on the ballot in 2002 and then used the governor’s office to campaign for multiple failed presidential bids.

Maybe I'm missing something. This person worked under Romney and Baker years ago. How does that mean Romney or Baker are on the hook for what he does now? Ever work with someone years ago that now moved to work on something else you'd be against?

Weren't the lies regarding his address more about tax evasion than anything else?

I would hope, for their sake,

I would hope, for their sake, that Red Curve insisted on being paid in advance.

Such a punchable name.

Bradley T. Crate?! Better not get anywhere near Boston Harbor...

I'm absolutely beside myself

That a 1980's middle-class destroying corporate raider would associate himself with such dregs.

Curves can have negative slopes

I missed the part where Mitt is still controlling this guy ten years after he did any business with him, but I assume he's controlling the guy's mind even now.

Not a fan of Mitt, he's a "nice" plutocrat, but he's got some skills

Mitt and Charlie still get some respect from

The other guy is referred to as "Florida man" in today's NY Post.

without a personal okay from Murdoch.

I'm okay with posts like this as long as information on the ALL the unsavory associates of ALL the politicians in Boston and Massachusetts posted. I know that won't happen on Universal Hypocrisy though. Ain't that right Adam.

Nobody's forcing you to stay.

This was comedy, right?

I followed the Dimasi scandal on UHub. I learned Martha Coakley went to work for Draft Kings and a vape company on UHub. This is a one-man shop & Adam does a great job covering a range of stories.

In other North Shore news

Man who runs a Marblehead shrine named for the patron saint of 'repentant thieves' charged in Covid fraud scheme
Seal relocated from Beverly to Rhode Island decides he likes Beverly more, returns
Contractor - and current state-senate candidate - who walked away from home project after clients paid him for most of the work deserves all the punishment he got, court rules
This storm was not messing around
It may be broiling on land, but the water north of Boston Harbor is still freezing
The family that sells fentanyl made to look like Percocets gets sentenced together