Councilor boils over about redistricting, white councilors who are too pitiful to even be called cowardly and white people calling her epithets 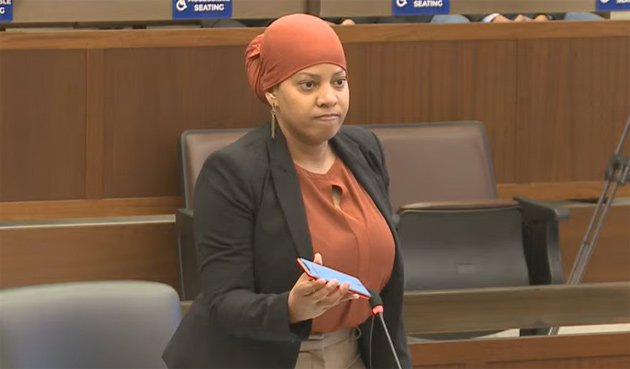 Slamming her desk in frustration at what she says is the treatment of Black and Hispanic councilors, Fernandes Anderson turned a discussion about a proposed effort to redistrict Boston into a cry of disgust that started with the way Councilor Ricardo Arroyo is being treated to an exposition on fears in her district that redistricting led by a white councilor will mean minorities will remain at a disadvantage in Boston.

The two are related because Arroyo had been the chair of the council's redistricting committee until Council President Ed Flynn removed him last week over the sexual-assault allegations. Flynn named Councilor Liz Breadon (Allston/Brighton), who is white, to replace him.

At today's meeting, Breadon promised a fair process to redraw district council lines based on the 2020 census.

But Fernandes Anderson said the move has her majority-Black district roiling, she said many of her constituents figure the fix is now in and that all the white councilors will band together to approve new maps that try to minimize the fact that Boston is now minority majority. And she said she is pretty upset about it as well.

"People are not innocent until proven guilty," she said. "People are guilty first. People are crucified, people are lynched! Same old tricks, same masters though. And now everything's changed everybody is upset everybody is boiling up. People are calling me and saying, don't say anything, stay in your lane be quiet, sit down, you will lose your seat, they won't vote for you. Fight. Don't fight.

"What the fuck do I have to do [slams fist to desk] in this fucking council in order to get respect as a black woman?!?" she asked.

And then Fernandes Anderson, who was born in Cabo Verde, held up her phone, and played a voice mail she got this morning, from some white guy who told her this is a white country built by white people and "if you don't like it, when don't you take your ass back to your shithole with your stupid ass scarf on your head."

Then, returning to Arroyo, she said, "they're allegations, for crying out loud. Let the courts decide. ...This is not a court, you don't get to crucify people before they're proven guilty." Looking at Flynn, she said, "Ed, you know I love you, you know I care about you, but the way this was done is wrong."

She added, "don't come for me, because if you want smoke, you'll get smoke, I'm not afraid of any of you."

City Councilor Kendra Lara (Jamaica Plain, West Roxbury, Mission Hill) supported Fernandes Anderson and agreed the way Flynn replaced Arroyo with Breadon on redistricting showed, again, the disparate treatment of and said that, as a black woman, she is also a constant recipient of hate. She says she gets at least one e-mail a day calling her "a nigger whore" and that she now has to bring security with her when she attends events in part of her district because of repeated threats.

And, Lara continued, many of those threats are from a hate campaign run by Darragh Murphy, whose sister is Councilor Erin Murphy.

Lara, who has a 6-year-old, said she went through "proper channels" and asked Flynn if he could ask Erin Murphy to ask her sister to back off. Lara said Flynn asked the councilor to talk to her sister and "Councilor Murphy said she would not."

She's an at-large councilor and can't be bothered that her own sibling is apparently motivating people to abuse and threaten her colleague?

The best and brightest

Fernandes Anderson is right, ’this is not a court’.
So any councilor can introduce any ‘evidence’ (such as unsubstantiated threatening phone messages) in to the record to support whatever point they/them may be trying to make.

whatever point them may be trying to make lol

grammar aside, what point is being made here?

Does anyone have any details about Darragh Murphy and his alleged hate campaign? I never heard anything about him.

CC Mr. Costello who just the other day was vouching for Murphy’s integrity.

She didn't even need to play the voicemail. It's astonishing to see people calling her a trashbag and talk about her headscarf and other awful things in comments and in places like Twitter.

Unfortunately, its not astonishing anymore

The Governor and T Managers would like to thank the Boston City Council for making fools of themselves and taking the T off the front page .

So Adam, what were you saying

So Adam, what were you saying about white supremacy in Boston?

Plenty of racists in Boston

Fortunately, they no longer get elected to the city council..

Look at the comments on the YouTube video of the Hayden/Arroyo church tonight.

But not sure I'm going to say whoever was commenting on a public live stream was/is from Boston, is say odds are they probably weren't, and probably were from 4chan or some other cesspool. That said, why the hell wasn't there a moderator locking that down?

did i miss something?

A lot going on here

Adam, just to be clear, is “white councilors are too pitiful to even be called cowardly” your opinion or your interpretation of Fernandes Anderson’s comments?
Also, unsubstantiated claims by the city councilor are taken as gospel but a police report and the words of a victim are suspect?
Where is the outrage for all those politicians that pulled support for Arroyo yesterday?
Also, are we to assume that because Liz Breadon does not support redistricting efforts because she is white?

It's a paraphrase of what she said. She actually said something like she can't even call white councilors cowardly because that would imply she should show mercy and she wasn't feeling merciful (to be honest, while I played back the video of the meeting several times to take down exactly what she said, by that point, I thought I'd kind of run out of time, because I wanted to get a story up about her main point, and with everything else, that seemed like a sort of parenthetical thought that was worth noting, but not spending more time taking down verbatim).

But don't take my word. The council has posted the video of yesterday's meeting and I've posted a copy of Fernandes Anderson's comments unedited at the bottom of the original post.

Too cool for school
It's official: Boston to get wicked cold
How people in the South End or Back Bay view prospective dates in Allston/Brighton
Don't forget to pick up some rubbers
When kids just used to hang out in the street
Wu calls for end of BPDA, 10% cap on rent increases in larger buildings, BPS improvements