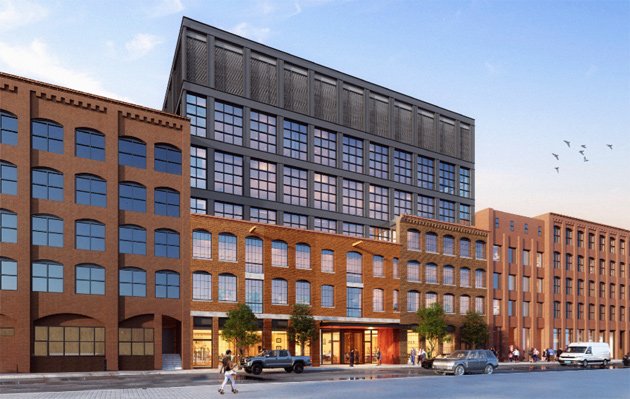 Two developers have filed plans with the BPDA for their proposed five-story life-sciences building at 65-69 Wareham St. in the South End, in what would be the latest outpost in a life-sciences corridor along Albany Street.

The new building, which would replace a warren of smaller buildings that started going up around 1875 in a then industrial section of the South End, extends to Plympton Street.

Transom Realty - itself based at the corner of Wareham and Albany streets - and Camber Development, headquartered downtown, say their proposed 79,600-square-foot building would have a 44-space underground garage.

In their filing, the developers say they will pay homage to the area's industrial past by retaining the facade of the old buildings for their new one.

The Project represents a unique opportunity to preserve and enhance the historic character of Wareham and Plympton Streets as a light industrial area, as contemplated in the Harrison Albany Corridor Strategic Plan and memorialized in Article 64 of the [Boston zoning] Code. The existing facades along Wareham Street will be preserved, with the new building incorporated seamlessly into this preserved façade. Furthermore, the Project continues the integration of previously approved public realm improvements along Wareham Street, creates the only through-block connection between Plympton and Wareham Streets on this block, and provides for an activated and engaging ground floor on Wareham Street through retail and publicly accessible lobby areas.

The project would be just across Albany Street from the under-construction Exchange South End complex, which will include life-sciences lab space next to Boston University's National Emerging Infectious Diseases Laboratory, which in turn is next to BU Medical School's campus and research facilities, which lead into the campus of Boston Medical Center.

The Wareham Street developers hope to begin two years of demolition and construction in mid-2023.

I hope Mayor Wu and the city

I hope Mayor Wu and the city council start acting as though they realize there is a housing crisis I'm Boston and put a moratorium on approving office/life sciences/etc and approve housing only. There is a huge demand for housing, but developers are off course going to build the most profitable thing allowed, which is mostly offices/life sciences. Not being allowed to build that for a few years will hopefully prompt them to build more housing, still profitable just less so. Offices/life sciences just increases demand for more housing and increases traffic.

too many labs not enough homes

Honestly this development pattern is going to hurt the city in the future. Why are developers apparently single-mindedly pursuing life-science/labs? It seems this is every new project. Over-concentration in bio is just as bad as over-concentration in any other industry and we desperately need to produce housing. Rents for some long-term tenants are going up 30% YoY.

Where are the people who work at these facilities going to live? Are they going to commute from elsewhere in Boston, Somerville, further afield? Traffic is worse than before the pandemic and the T is a joke now. Wu ran on separating the planning and permitting functions of the BPDA. What's the hold up on that? It seems like no one is planning for the city now.

The South End is gone, man

I was walking down Harrison last week and stepped in a puddle. Some nerd rose out of the water and yelled at me for interrupting his biotech experiment.

Was Thirsty A Month Ago

Turned to go into Lasker's. Um. Not there. It's an apartment.