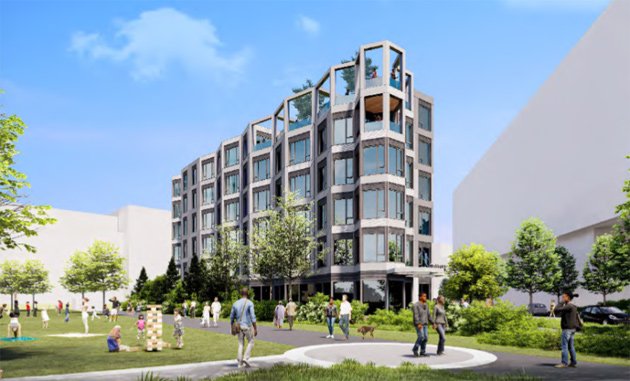 Rendering by Gensler of the view from Smith Field.

The developers who proposed a three-building life-sciences complex to replace the current WBZ studios on Soldiers Field Road in Allston this week added plans for a fourth building - a six-story, 85-unit apartment building, with more affordable units than required by the city, as requested by local elected officials.

The building would join the three eight-story research-and-development buildings that National Development of Newton and the Mount Vernon Co. have already proposed for the 6.3-acre site that has been home to WBZ since the 1940s. The station plans to move into a new building just next door - after the razing of a small office building that is now the Mount Vernon Co.'s headquarters.

Under the plans for the apartment building, 20% of the units would be rented to people making between 40% and 100% of the Boston area's median income. Normally, the city requires just 13% of units in new buildings be rented as affordable.

As currently envisioned, a mix of unit types will be provided, including approximately 10 studio, 56 one-bedroom, 14 two-bedroom, and 5 three-bedroom units, the latter of which are intended to attract families in the neighborhood.

The developers explain why they added the residential building:

The new building would have 42 parking spaces.

A roof deck will be large enough to provide residents "with ample space to socialize, collaborate and exercise."

Seen from another side:

View of proposed courtyard, apartments on the left, research on the right:

Map of the proposed development:

The view of the complex from Soldiers Field Road inbound:

curious to see if they get parking variances. being a 5-10 minute walk from 70,66,86 stops and 18 minute walk from CR does not make a particularly transit rich area. there is decent bike access to Harvard, Back Bay and Downtown. but it doesn’t seem like an area where there’s even decent street parking.

I obviously don’t want to lock in car dependency, but until west station comes online in 10? 20? 30? years, lower allston is going to be a bit of an island.

I'm a bit more optimistic than you when it comes to walkability and transit connections for this part of Allston. The 66 is one of the busiest bus lines, and there are plans in the design stage to add bus lanes to Western Ave. I imagine that Lower Allston could pretty quickly be transformed by bus and bike lanes along Western, N Harvard, and Cambridge. Consider how most through traffic goes along Soldier's Field or the Pike anyways.

If I were in charge, a

If I were in charge, a welcoming pedestrian entrance heading towards Western Avenue would be a non-negotiable condition of approval. Maybe also improving Speedway Avenue with sidewalks, though that could require the agreement of whoever owns it.

From the plans, it looks like MAYBE there is such an entrance at the southwest corner?

Either way the majority of people will treat this complex as a car-oriented offshoot of Soldiers Field Road. But any people who want to walk or take transit should be able to do so without an endless unnecessary walk along Soldiers Field Road to Everett Street.

I noted that the old Stadium Auto Body was now listed as Nexus. Here's the story of how Nexus came about (it's still - partly - the guy who owned the body shop.)

Beer truck tips over on turnpike in Allston; spills bottles, cans everywhere, but too late, it's been cleaned up
Allston mural fades into the sunset, well, it was painted over
Shuttered Allston post office could be torn down to make way for apartments
Allston hot-dog joint can't cut the mustard anymore; to close next month
Thunder? Lightning? Could those mean, gasp, rain?
Allstonians organize to turn Allston Rat City into Allston Rock City